Several days after first lady Melania Trump stirred controversy by wearing a jacket that read "I really don't care, do u?" on a trip to visit a children's shelter on the US-Mexico border, people are still scratching their heads.

What did it mean? And how did something like this happen?

On his late-night show, comedian Stephen Colbert asked a version of the question reverberating around political Washington: "How many people would get fired for this at a normal White House? One? Five? The entire executive branch? … People who were supposedly on her side let her get on a plane with a jacket that said, 'I really don't care, do you?'"

Whether the first lady anticipated – or was warned – that her outerwear would divert attention from what her staff described as a humanitarian mission, her choice to wear it in public seems to be deliberate.

Her small staff has described her as a decisive first lady who values loyalty and privacy.

Melania Trump's East Wing team includes only 10 aides, compared with the 25 or so who worked under Michelle Obama and Laura Bush. She also a eschews a "body person", a personal aide who typically travels with a president or first lady and acts as an assistant.

In an interview in April, the first lady's chief of staff, Lindsay Reynolds, said Mrs Trump determined that she didn't need to fill that role. "She is so low-maintenance, so efficient, that she does everything herself," Ms Reynolds said. "So in the very beginning, I started interviewing people for the role. I said, 'OK I have people for you to meet.' And she said, 'I don't need one.' "

Mrs Trump is known for taking on the kind of decisions that previous first ladies typically delegated to others. For her first state dinner, she opted not to hire an outside party planner, as is the norm, and chose everything, including the flowers and the table linens, herself, with the help of Rickie Niceta, her social secretary.

And she often selects her clothing without assistance, relying less on stylists and personal shoppers than on her own taste. Her spokeswoman, Stephanie Grisham, told The Washington Post's fashion critic, Robin Givhan, in December that the first lady "chooses what she likes and what is appropriate for the occasion. She does not worry about her critics."

Designer Hervé Pierre, who sometimes acts as Melania Trump's stylist, had never seen the controversial jacket – which is from the fast-fashion clothing line Zara's 2016 collection – before the first lady wore it this week, according to an interview with Women's Wear Daily.

So was anyone in a position to advise Melania Trump against wearing a coat that broadcast a message with the potential to offend?

Anita McBride, who served as chief-of-staff to Laura Bush, described the interactions between political aides and their "principals" as a "delicate dance".

"She might have really wanted to wear it and was stubborn about it. Maybe her staff did say something. We don't know," Ms McBride said. "But when you are putting together a trip like this, they have to know that anything they do and say and wear is going to send a message." 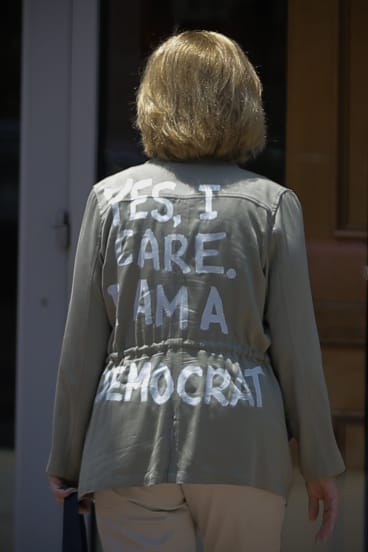 The controversial jacket has spawned several memes and iterations with a more positive message.

Advising a top government official sometimes involves telling them things they don't want to hear, Ms McBride added. "That's the nature of these positions – you give your best advice and best guidance and, ultimately, they are going to make the decisions for themselves," she said.

First ladies' sartorial choices are seldom made on the fly. For trips, particularly those abroad, the first lady's staff typically prepares a "wardrobe memo" as part of her schedule, Ms McBride said. The memo notes the events she will be attending, along with all kinds of factors that might dictate fashion choices, from weather to the terrain she will be walking on to matters of protocol, such as whether particular colors carry symbolism in a culture.

People have long tried to divine messages in first ladies' attire. During a 1996 visit to Japan, first lady Hillary Clinton "baffled" her host nation by wearing several all-black ensembles. "Covered in Black," was the headline of a story in the Sankei Shimbun that posited a few reasons for Clinton's color scheme: She was mourning the death of Commerce Secretary Ron Brown, marking the anniversary of the Oklahoma City bombing, or she was pregnant and thought black was slimming. Her spokesman swatted them all down.

And sometimes, a first lady's choices can undercut her message, like when Michelle Obama drew scrutiny for sporting a pair of $540 Lanvin sneakers to volunteer at a food bank.

But Mrs Trump's declaration was, perhaps, more intentional. One former White House aide who worked with top officials in both the Obama and Clinton administrations noted that the fact that cameras captured Mrs Trump boarding the plane at all was unusual. When the first lady travels alone from Washington, her tarmac arrival is traditionally closed to the media, so the decision to allow Mrs Trump to be photographed seemed deliberate.

That only raised more questions. Perhaps she wanted to amplify the phrase on her army-green jacket; President Donald Trump said her coat's message was directed at the news media.

"This was arguably the most substantively important solo trip since she's been first lady," the former aide said. "Why mix messages with a dig at the media and distract from the point of the rare solo working trip?"