On the runway and red carpet Meghan Markle has always been more experimental than her royal in-laws, something the actress continued with her appearance on The Ellen Show. While Kate Middleton is trapped in conservative, covered-up, queen-in-waiting ensembles, Markle has been able to bring a Hollywood approach to her considerably less-defined role.

In a white Oscar de la Renta blouse (currently sold out, despite its $2470.12 price tag) with palm-leaf details perforated on the silk georgette sleeves, Markle displayed how to flirt with the cut-out trend, balancing duchess-like decorum with starlet style. 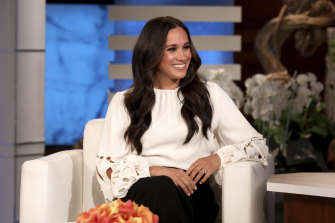 Meghan Markle does cut-outs her way by wearing Oscar de la Renta on The Ellen Show.Credit:Michael Rozman/Warner Bros. via AP

Cut-outs are to current fashion what peplums were to the noughties and grunge was to the nineties and can be challenging to people who dress more like Iris Apfel than Troye Sivan and lack Lizzo and Cardi B’s unassailable body confidence.

This cut-out concession comes hot on the heels of Markle wearing a searing red Carolina Herrera gown to the Salute to Freedom Gala in New York, with a plunging neckline executed in a refined way that could be carried off with ease by women over 70 who aren’t called Helen Mirren.

Stylist Emma Read, who has worked at Elle and with Myer and Westfield, gives Markle top points for gently nodding to the cut-out trend, which is championed by Chloe, Christopher Esber, Dion Lee and even Chanel.

“Unfortunately, cut-outs are steeped in a certain body type, and if you don’t have that body type it’s difficult to adapt to your regular dressing style,” Read said. “This is a great way to approach it without having half of your stomach out.” 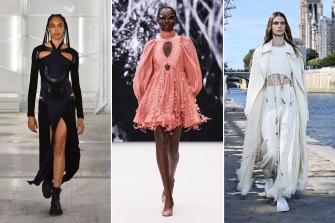 In the bonus round Markle also scores highly for choosing more fabric rather than less. “By playing with volume, drawing attention with the distinctive sleeves of the Oscar de la Renta blouse, she is still providing visual interest and challenging proportions without having to show more skin.”

Nicole Bonython-Hines, who has styled INXS, Kylie Minogue and consults to a high-powered private clientele on wardrobe selections is also wary of cut-outs. 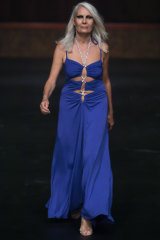 “I know that everything is meant to be inclusive these days, but a lot of these styles exclude women and it’s not just because they don’t go above a size 12,” Bonython-Hines said. “Most women I know above 35 just don’t feel confident showing that much flesh. They will see something they love, then turn it around to find that it has no back, which is useless if you need a bra.”

“Meghan’s puffed-sleeve approach is a good one for all women, especially those self-conscious about their upper arms.”

Non-binary stylist and activist Deni Todorovic appreciates the pressure on Markle to cover up, having experienced resistance when he placed a mature model in a Nicola Finetti dress with revealing cut-outs on the runway at Melbourne Fashion Week.

“People were saying ‘don’t you think that it’s a bit mutton dressed up as lamb?’ which is such an outdated notion to me,” Todorovic said. “When she came out on the runway, it was a real moment. Many women, and even myself as a non-binary person, become more emboldened as they get older. If you want to, you should go for it.”

Having agreed to take part in pranks on The Ellen Show it will be interesting to see in which direction Markle takes her fashion evolution. Has anyone told her about the midriffs and mini-skirts on their way from Miu Miu? At least Kate Middleton can breathe out and relax.