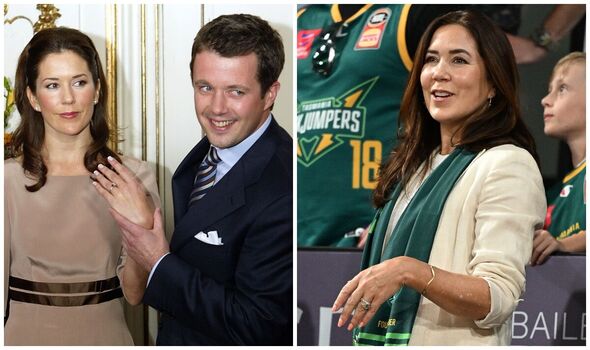 Crown Princess Mary, born Mary Donaldson, is an Australian native who married Frederik, Crown Prince of Denmark in 2004 after meeting during the 2000 Summer Olympics. Their official engagement in 2003 and their marriage the following year were the subject of extensive attention from Australian and European news media.

They portrayed the marriage as a modern “fairytale” romance between a Prince and a commoner. The couple became officially engaged on October 8, 2003.

Some royal engagement rings are classic, some are simple, and some are more ostentatious.

But the ring Crown Prince Frederik gave to Mary was more patriotic than anything else and a sweet tribute to his mother country.

Frederik presented Mary with an engagement ring featuring an emerald-cut diamond and two emerald-cut ruby baguettes, which are the colours of Denmark’s flag.

The colours were chosen specifically by Frederik because of the poignancy of Mary marrying into the Danish Royal Family, and renouncing her Australian citizenship.

After the royal wedding in May 2004, Mary began stacking the engagement ring with her diamond-set wedding band.

In recent years, the engagement ring has been altered slightly. Two more diamonds have been added – one on either side of the ring.

This made the ring look more substantial, and it is certainly a piece fit for a future Queen.

Mary’s ring can now be seen with additional symbolic weight. She gave birth to twins, Prince Vincent and Princess Josephine in 2011, now aged 12.

After this, Crown Princess Mary had another two diamonds added to her engagement ring alongside the rubies.

The four side stones are supposed to represent the couple’s four children, including the heir to the throne Prince Christian, now aged 17, and Princess Isabella, aged 15.

She frequently pairs the engagement ring with a white gold channel-set wedding band.

Mary often wears a flashier ring on her right hand in place of her engagement and wedding rings.

It appears to be larger than her wedding set with a thick, domed band, with pave diamonds.

Mary wore the larger ring during the 100th-anniversary celebrations of the Danish Supreme Court in 2019.

Once again, her wedding set was missing in place for this newer ring.

Most likely, Crown Princess Mary’s love of fine jewels has given her the freedom to change up her look to match her outfit and she simply chooses to leave her wedding set at home for certain events.