Six years ago, Julio Torres, the comedian, former “Saturday Night Live” writer and bilingual surrealist, decided to dye his hair. He called Marcy Ozuna, a hairdresser who works out of a narrow shop on Sullivan Street in Greenwich Village. “It’s time,” he told her.

“You were so excited,” Mr. Torres said.

On a sticky Wednesday earlier this month, her “boy,” whom she also calls “Julito” and “baby,” was back. Mr. Torres had just returned from a trip to Greece with his friends Ana Fabrega and Greta Titelman, who star alongside him in the eerie Spanish-language comedy “Los Espookys.” The Aegean sun had left his hair a pallid beige.

With the release of his HBO special, “My Favorite Shapes by Julio Torres,” and a promotional segment on “The Tonight Show Starring Jimmy Fallon,” he needed something more vibrant. “Sunset,” he told her as she spun his chair toward the mirror and molded his bangs into a jagged spike. 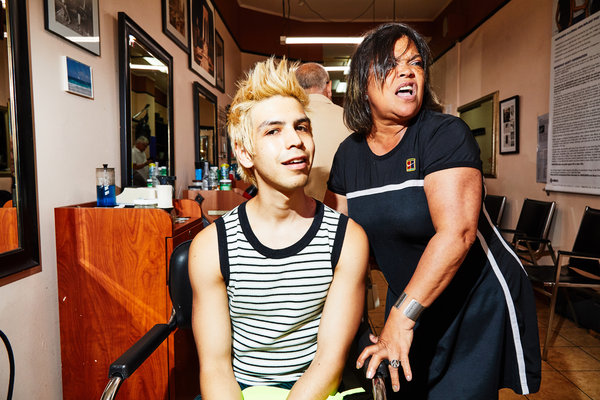 Geometric forms are crucially important to Mr. Torres. In the hourlong HBO special, which premiered on Aug. 10, he sits onstage behind a conveyor belt that brings him various objects — a crystal, a cactus, a piece of chocolate. He proceeds to describe each in mundane and hilarious detail.

After some small talk, Ms. Ozuna wrapped him a shiny black cape and got to work. They have known each other for 10 years, ever since Mr. Torres, who had moved from El Salvador to attend the New School, admired the haircut on a roommate’s friend and found himself at Salon G, in Ms. Ozuna’s station, and he loved her right away. That station wasn’t always decorated with framed magazine cutouts of Mr. Torres. It is now.

“I told my co-worker, I want my boy next to me,” Ms. Ozuna said, dancing around him in red platform sandals.

She has never seen his stand-up, arcane routines that emphasize his not-from-around-here perspective. Nor had she seen his bizarrely funny “S.N.L.” shorts, like “Papyrus” (starring Ryan Gosling as a man obsessed with the font used in the “Avatar” movie poster) and “Wells for Boys” (a spoof commercial for a toy wishing well for “sensitive boys”).

“I never ever thought my boy was like that, a comedian,” Ms. Ozuna said. “Such a quiet boy.”

She spent years persuading him to abandon his brown hair and now, every three or four months, they experiment with different shades of blond: ash, metallic, vanilla, champagne. Once, briefly, they went black.

“I thought I wanted it,” Mr. Torres said ruefully.

On “Los Espookys,” his character, Andrés, has blue hair; as soon as Mr. Torres returned home from the set in Santiago, Chile, he went to Ms. Ozuna to correct it. “Like Immediately. Like the next day,” he said.” By the time he left for Greece, she had made him a strawberry blonde.

“Red always fades,” Ms. Ozuna said, philosophically as she moved to the back of the salon to create his color. She started dyeing hair in the ’80s, making colors out of Kool-Aid. Now, she mixes hues by hand, infusing a peroxide base with three or four shades, softening it with vitamin E oil and jojoba oil.

She returned with the color, presenting the chestnut liquid like an offering. “This is what Julito tells me all the time, ‘Marcy you’re an artist,’” she said.

She applied the dye with a broad brush, then worked it in with her gloved hands (“I like to feel it all the way through,” she said) until his hair stood out in spikes, like the crown on the Statue of Liberty. The priest in the next chair leaned over to admire her work. “This color is going to be delicious,” Ms. Ozuna added.

She let it sit for a few minutes, then took Mr. Torres to the back for a shampoo and rinse, before squeezing his hair dry with a towel. But when she pulled the towel away, something had gone wrong. His hair didn’t look like sunset. It didn’t look delicious. It look more like eggplant purple.

“Should we make it lighter?” he said.

She agreed. “When we do color, we play together,” she said. “We’re playing, changing, working. We have to get what he wants.”

She mixed the color more quickly this time and poured it into a plastic squeeze bottle, drizzling it onto his hair like a butterscotch sauce on top of a sundae and working it through again. He looked like a firework, as he bent his neck back into the sink.

“I killed the violet,” she said, as she rinsed his hair. “The violet was in my way.”

She wrapped him in a new cape, brown with a leopard print. His hoop earring had fallen out during the shampoo, but she found it in the sink’s drain. In a hand mirror, he admired his damp hair.

“It’s like a tangerine almost,” he said. “A little rosé, a little tangerine.”

“Julito, grab my blower,” she said.

Back in the front of the salon, Ms. Ozuna applied a clear finishing treatment, blew his hair dry and trimmed it with pink scissors, before taking a razor to the ends and working some pomade through until it gleamed like a fire opal.

She told him not to shampoo his hair or expose it to chlorine. He told her he planned to spend the coming weekend in the pool at Fire Island. Her face fell.