Michael Kors’ love of theater is a close second to his love of fashion.

He has been to hundreds, probably thousands, of live performances over the past 50-plus years, starting at age five, and has been deeply concerned about the shutdown of Broadway, which he calls “the beating heart of New York,” and how it has impacted some 87,000 jobs.

“Our office is close to the Theater District so we feel part of the community,” said Kors, who dedicated his 40th anniversary runway show to Broadway, including making a donation to nonprofit The Actors Fund. “When people hear The Actors Fund they think actors, and it’s for them but also to support the entire army of talent behind the scenes that brings a show to light.…We don’t want this pool of talent to disappear.”

While Kors has been trying to get his fix by streaming theater during quarantine, “it’s not the same,” he said. Recently, as New York’s COVID-19 restrictions have eased, he was able to see Rufus Wainwright perform live — as part of an audience of 40. “I felt like someone had reconnected a body part that was missing,” he said of the thrill, which he is sharing with viewers of his 40th collection film Tuesday, featuring Wainwright and appearances by “a cavalcade of Broadway legends,” including Chita Rivera and Billy Porter.

As a curtain raiser, WWD dished with the designer about his favorite opening nights, diva crushes, the show he’d like to revive — and design costumes for.

All of the Fashion at the 2021 BAFTA Awards

WWD: What was your first Broadway show?

Michael Kors: Ethel Merman in “Annie Get Your Gun.” Of course, I was five, so I had no way to know this was not the norm. My mom never took me to see the clunkers. To see “Hair,” she had to lie to my father and tell him we were going shopping. He thought it was not a good show for an 11-year-old.

WWD: Mine was “Annie,” and one of my classmates was an orphan, so we were all so jealous.

WWD: Who are the divas you’ll always love? Besides Bette, because that’s a given.

M.K.: When I was working at Lothar’s the hottest ticket was seeing Patti LuPone doing “Evita,” and you literally felt like you were blown out of your seat backward. Bernadette Peters’ “Sunday in the Park With George,” when the first act was finished, I had tears rolling down my face. Anyone who is in the creative world, that show knocks you out. And her voice broke my heart. Angela Lansbury in “Sweeney Todd.” How did Stephen Sondheim even conceptualize we were going to sit through a show about a mass murderer and find it entertaining? Watching Audra McDonald do Billie Holiday on the stage by herself in “Lady Day at Emerson’s Bar & Grill,” you are so riveted. “Anything Goes” is one of my favorites. When Sutton Foster finished the big tap number, and the audience is feeding off the energy on stage and each other, you can’t recapture that on Zoom, streaming or film.

WWD: Did you see “Starlight Express” with the roller skaters? I loved that.

M.K.: [My husband] Lance’s first show was “Starlight Express,” it was Audra McDonald’s first show, and Jane Krakowski was in “Starlight Express.” We were all at a dinner and they looked at me and said, “You didn’t go see it?” I said “No, roller skating was not meant to happen on Broadway.”

WWD: What about Glenn Close in “Sunset Boulevard?” That was a moment.

M.K.: We saw it with Glenn, with Betty Buckley, then we saw it in London with Rita Moreno, and Rita let me go onto the stage and got them to press the hydraulic lift, so I got to experience walking down the staircase when it was moving. 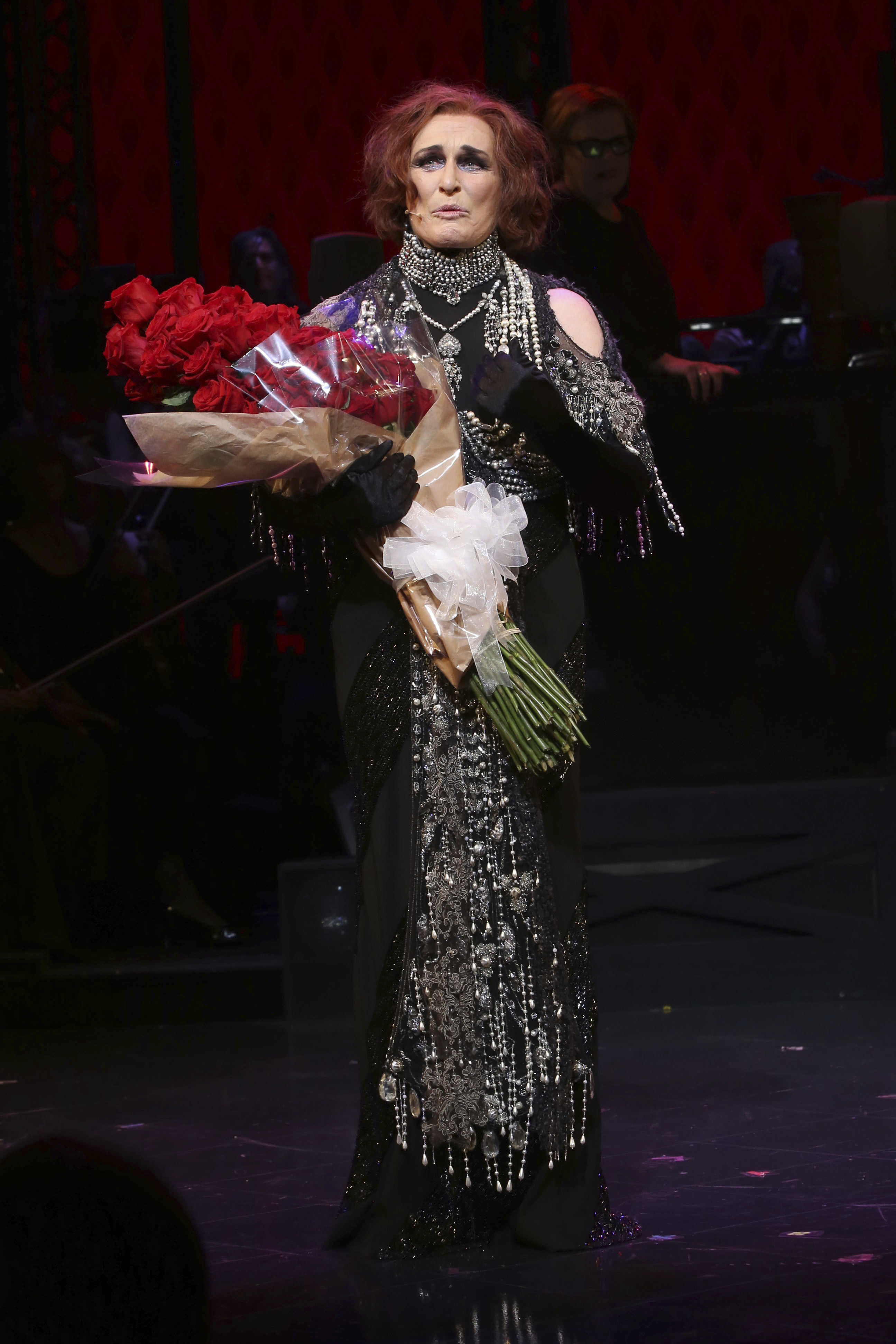 M.K.: Opening night of revival of “Hedwig and the Angry Inch,” we sat down and the person in front of us was dressed all in white with an enormous picture hat on. Even though she was very fabulous from behind and I loved what she was wearing, I kept thinking she was going to ruin the show for me, so I leaned over to say something and realized it was Yoko Ono.

WWD: When I went to see “Slave Play,” they held the show 25 minutes because Rihanna was late.

M.K.: Did she get a standing ovation?

M.K.: At Lincoln Center for a celebration for Sondheim’s 80th birthday, we got there just as the lights were going down, and realized Sondheim was sitting directly across from us. I was knocked out being that close to him as he was experiencing all his work.

WWD: Soundtrack you listen to on repeat?

M.K.: “A Chorus Line.” I know every word, and I use some of the lyrics in life. All of them are taken from the recordings of the dancers, so they are often the perfect comeback or thought. 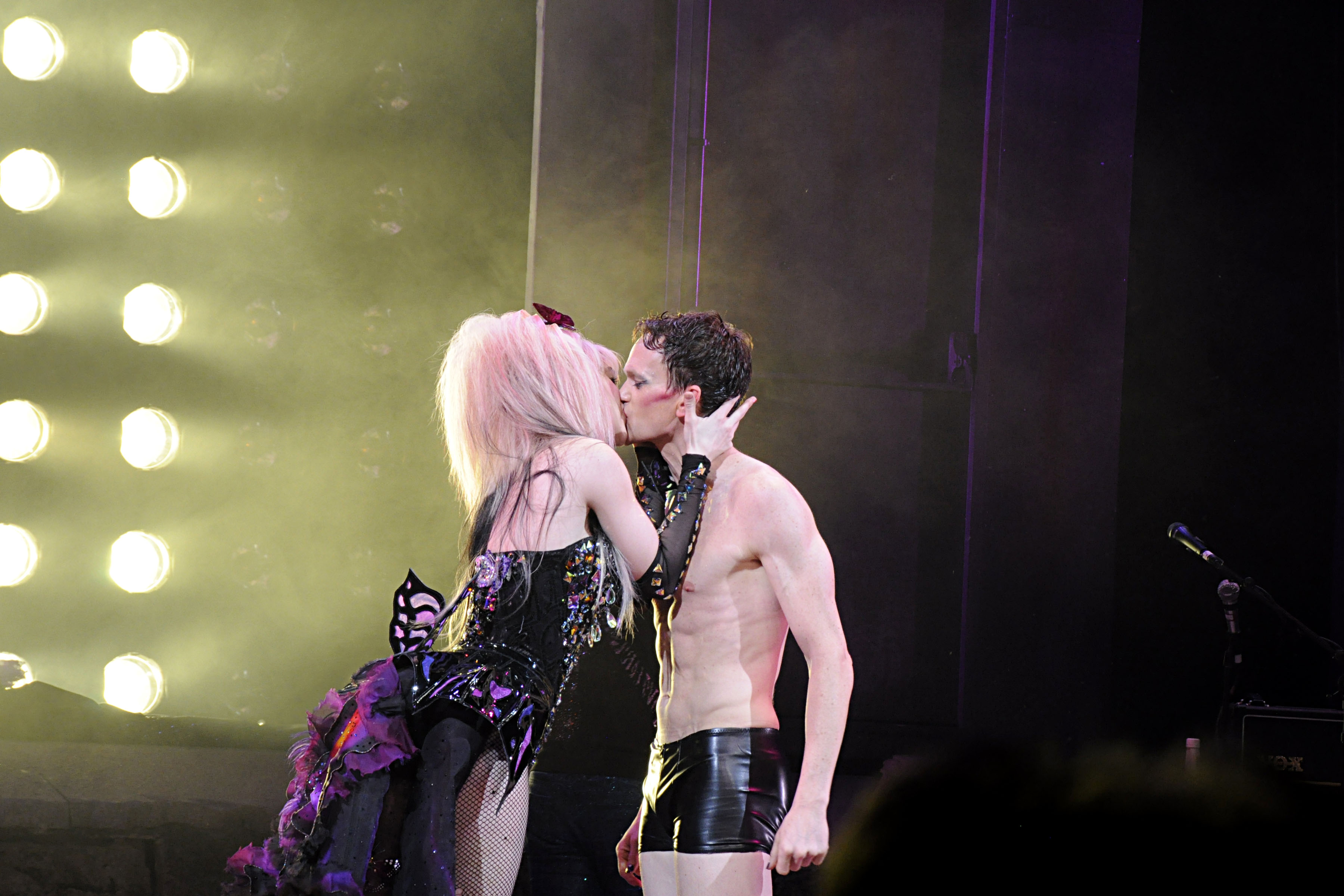 M.K.: I love the song, “I Can Do That.” In life, even if you think you can’t, you figure it out. If you said to me, after 40 years what have you learned, it’s this: Know that things change — that’s the point — and you have to say, “I can do that.” When I told them I didn’t want to do “Project Runway,” then they said you are a critic at Parsons, you work with students at FIT, I said, “I can do that.”

WWD: And you did. Worst Broadway behavior you’ve witnessed? I remember seeing “M Butterfly,” and at the pivotal moment right before the character’s identity is revealed, someone in front of me blurted it out.

M.K.: That’s terrible. We were in the theater the night Patti LuPone stopped the show because someone was using their cell phone. Watching her admonish that man was something. The night we saw Bruce Springsteen on Broadway, his fans were so rabid and started screaming “Bruce, Bruce, Bruce” and he very gentlemanly said, “There will be a moment for that later.” And later he let everyone take out their phones, cheer and take photos. The audience is not used to unplugging. It’s the same with fashion shows, which people are now often watching through their phones. Backstage in the ’80s, I didn’t even have a monitor, I had a peep hole.

WWD: Do you remember the before times when you couldn’t bring drinks and snacks to your theater seats? Are you team seat snacks or no?

M.K.: Never, ever. Intermission only. Give me a vodka on the rocks at the bar at Sardis during intermission and I run back in time for the second act.

WWD: Last show you saw before the COVID-19 shutdown?

M.K.: David Byrne’s “American Utopia.” If it had to be my last memory, it was a spectacular one. And I don’t want to sound like a shallow fashion person but that show was so chic. Chic! Chic! Chic! Everything about it. 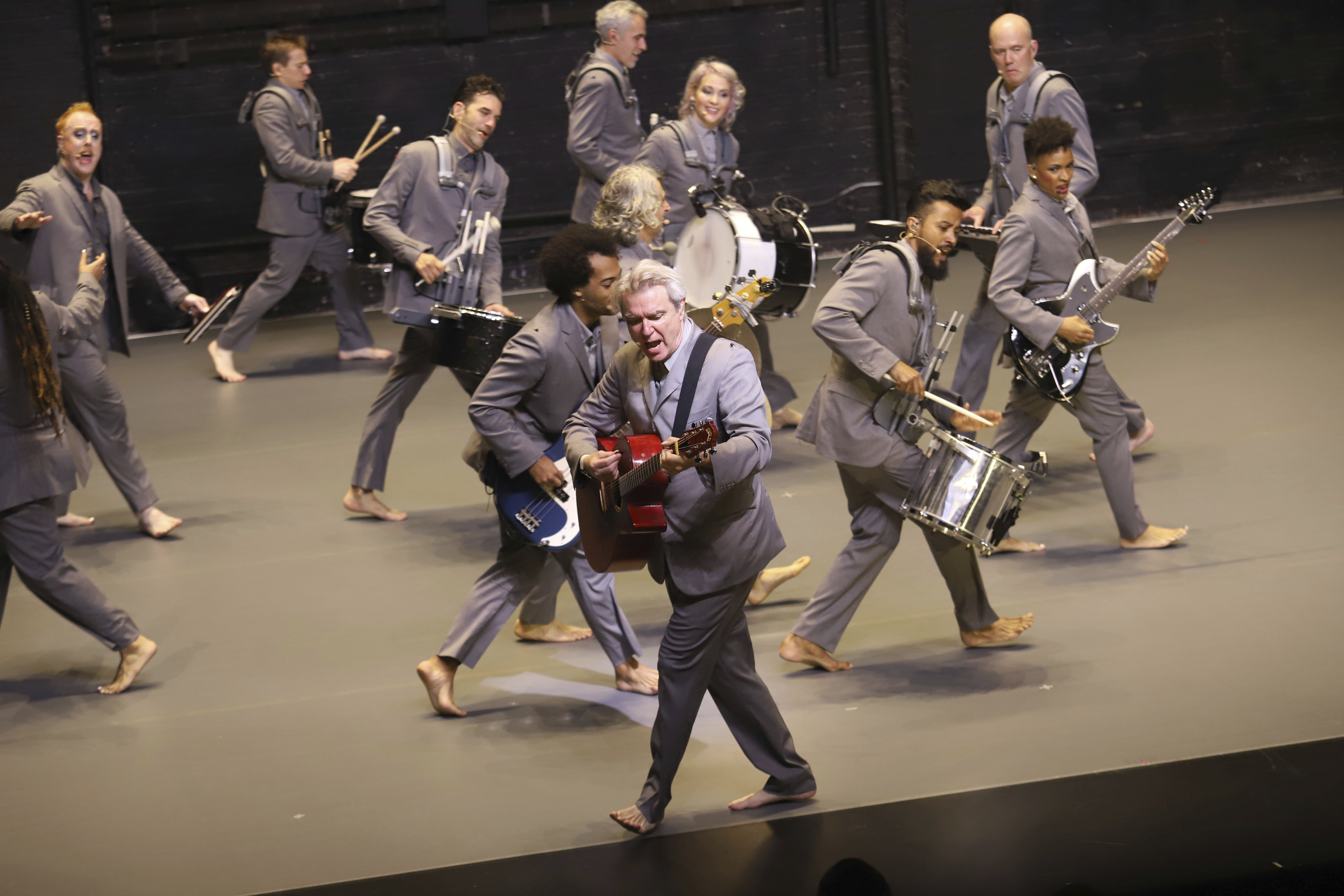 WWD: Fashion-wise, any other shows that have echoed with you?

M.K.: I remember seeing Lauren Bacall in “Applause” when I was young. It was so big city glamorous. Sign me up for black sequins for days.

WWD: Have you done costumes for Broadway?

M.K.: Not Broadway, but when I was designing Celine in Paris, I got a call from costume designer Arianne Phillips, she was working on the play “Up for Grabs” in London. She said, well, Madonna is starring, she plays a very powerful art dealer, and I thought the clothes you showed for Celine would be perfect for her character, who is very successful but not the nicest person the world. So she wore a lot of Celine.

WWD: You should do a Broadway show.

WWD: What are you excited to see after Broadway reopens? Ahem, “Game of Thrones?”

M.K.: To be honest with you, we will be so excited we’ll go to things we don’t even care about. I will go to a musical version of “Designing Women.”

WWD: That’s a great idea, you should produce that. 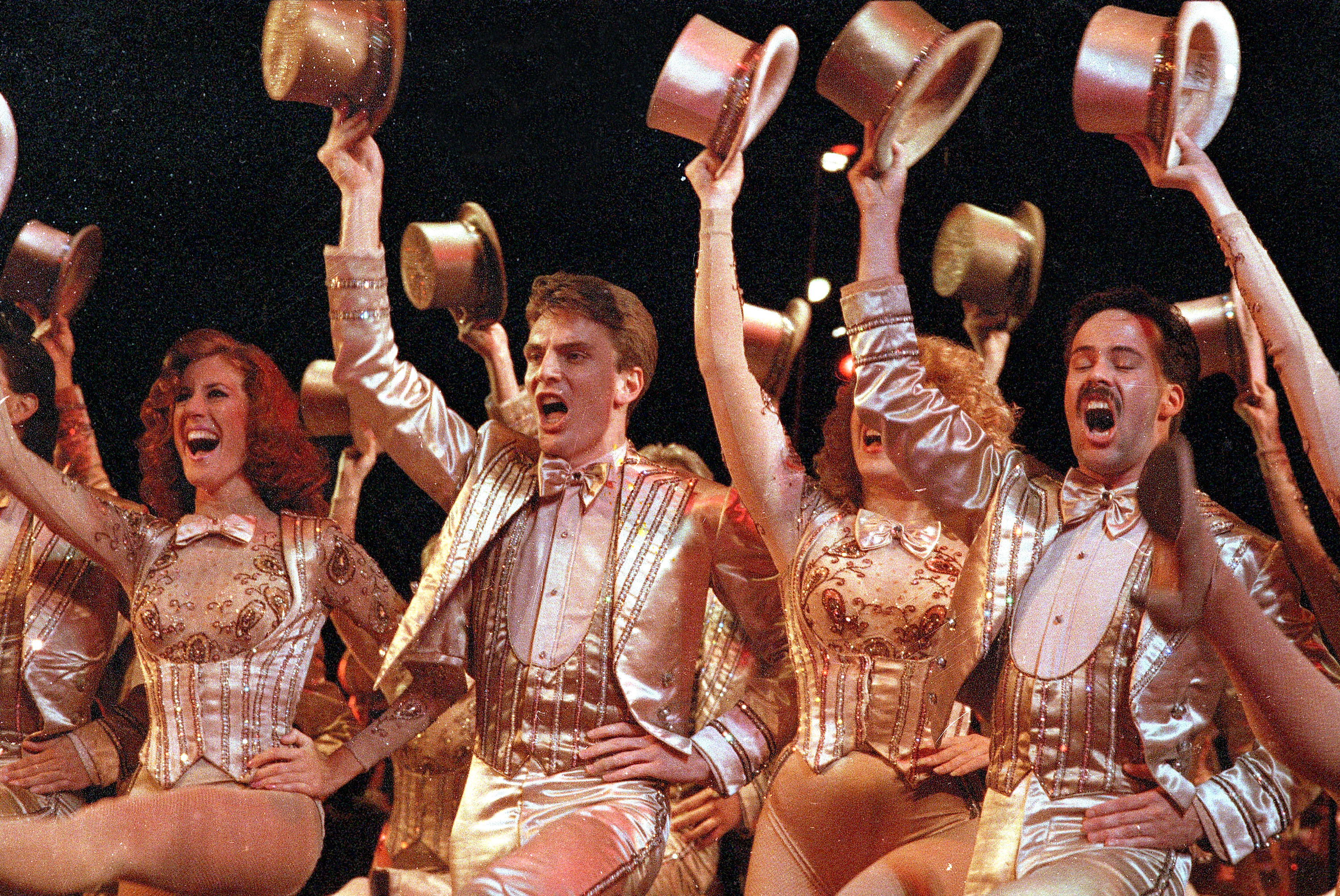