Brian Tyree Henry looked to the heavens and let out a primal roar. He was playing the arcade game X-Men: Children of the Atom and his avatar, Storm, the silver-haired weather-controlling mutant, had just been laser blasted by Cyclops.

“Aw, man! Come on,” he said, along with some unprintable phrases.

Mr. Henry was spending a Tuesday afternoon playing vintage video games at Barcade in the East Village of Manhattan. “When I was in junior high school, I would always go to the dollar movie,” he said. “There was an arcade next door.” Between double- or triple-feature days, he would pass the time sharpening his skills. “This is where we’d come to take out our aggression.”

Mr. Henry no longer merely watches movies, he acts in them. This month, he has supporting roles in two highly anticipated films: the crime thriller “Widows,” directed by Steve McQueen, and “If Beale Street Could Talk,” which is Barry Jenkins’s follow-up to his Academy Award-winning “Moonlight.”

But the 36-year-old actor is perhaps best known for his television work, playing Paper Boi, the up-and-coming trap rapper on “Atlanta.” Earlier this year, he received a Tony nomination for best supporting actor in the play “Lobby Hero.”

As Mr. Henry sees it, he is just taking that childlike energy of playing video games and directing it to acting. “What we do is make-believe,” he said. “It’s all fantasy. This is where it all starts,” he added, gesturing to the flashing arcade consoles. “You put in a token and suddenly you’re living out every kind of story that you possibly can.” 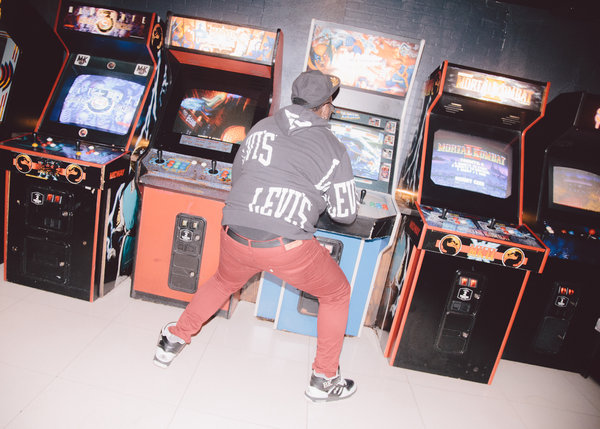 Mr. Henry’s love of arcade games was palpable on an overcast and muggy day in early October. With his round face and Cheshire cat grin, he sat in front of a video game based on “The Simpsons” for the better part of an hour.

Wearing maroon jeans, hooded sweatshirt and a baseball cap, Mr. Henry was almost in a meditative state, staring at the screen while answering questions about his upbringing and career. Every so often, he would shout directly into the screen — “Go, go, go, go, go!” — before snapping back to reality.

“This game is like commentary on everyday American life,” he said at one point, while navigating Bart Simpson through a bar filled with woozy drunkards.

Mr. Henry comes across as breezy and carefree, but he knows his success is meaningful and arrives at an important moment for black actors. “I think of my 14-year-old arcade-playing self, and I never thought there would be an opportunity to be in a show that was so popular with three black men as the leads,” he said, referring to “Atlanta” and his co-stars Donald Glover and Lakeith Stanfield.

Mr. Henry’s character has evolved over the show’s two seasons (a third season has been ordered but not yet filmed), challenging the stereotype of a swaggering black male rapper. Paper Boi (given name: Alfred Miles) can be cocky, but also introspective and anxious about his rising profile. The episode “Woods,” from Season 2, filled in gaps from his back story and provided nuance.

“I didn’t want to just show his masculine side,” he said. “I wanted to get to the femininity of him. The vulnerability lies in the ability to access both. For me, I was like: Has he cried? Can he cry?”

His portrayal of Alfred makes him a sympathetic antihero. “My whole thing is, we all have an Alfred in our lives,” he said. “Like, he’s my cousin. He’s literally my next-door neighbor on the block playing dominoes, you know what I’m saying? He’s my father. When I first read the script, I thought, ‘I know exactly who this guy is.’”

It’s a stark contrast to his menacing role in “Widows,” in which he plays opposite Viola Davis as an underworld criminal named Jamal Manning, trying to turn a new leaf by running for the Chicago City Council. “He’s doing what he needs to do,” Mr. Henry said of his character.

He grew up in Fayetteville, N.C., and went to Morehouse College before attending the Yale School of Drama. He landed notable roles before graduating, including in Shakespeare in the Park’s “Romeo and Juliet” and, later, as part of the original cast in “The Book of Mormon.”

With a docket of movies this fall being floated as Oscar contenders, it appears that he is hitting a career stride.

“Everyone keeps saying, ‘You’re having a moment.’ And I’m like, this is not a moment for me. I want this to be a movement,” Mr. Henry said. “I want this to continue as long as possible because there’s just so many stories to tell, man, and so many different ways to do it.”

Later that night, Mr. Henry would be attending the premiere of “Beale Street” at the New York Film Festival, in which he has a supporting role. It was held at the Apollo Theater in Harlem, not far from where he lives, though he hasn’t been spending much time there these days.

Other projects include a comedy starring Melissa McCarthy, an action film pitting King Kong against Godzilla, and a reboot of “Child’s Play,” the horror movie about a possessed doll. “I’ve gone from sitting in front of Viola Davis to running away from Chuckie!” he said, laughing.

When he does have a rare bit of downtime and there are no arcade games readily available, he has another guilty pleasure to help him relax.

“I know this is going to sound crazy, there’s this channel called Investigation Discovery,” Mr. Henry said. “It’s basically 24-hour crime drama, like crazy Midwest people killing each other for insurance money. The re-enactments are so good.”

He even spotted his “Atlanta” stand-in on an episode, playing a serial killer. “I was like, Man, you killed it, literally,” he said. “Some people might think it’s cheesy, but if you’re on Investigation Discovery, to me you’ve made it.”

A TODDLER who was found starving and severely dehydrated with broken bones all over her body was subjected to 18 months of torture, an affidavit…