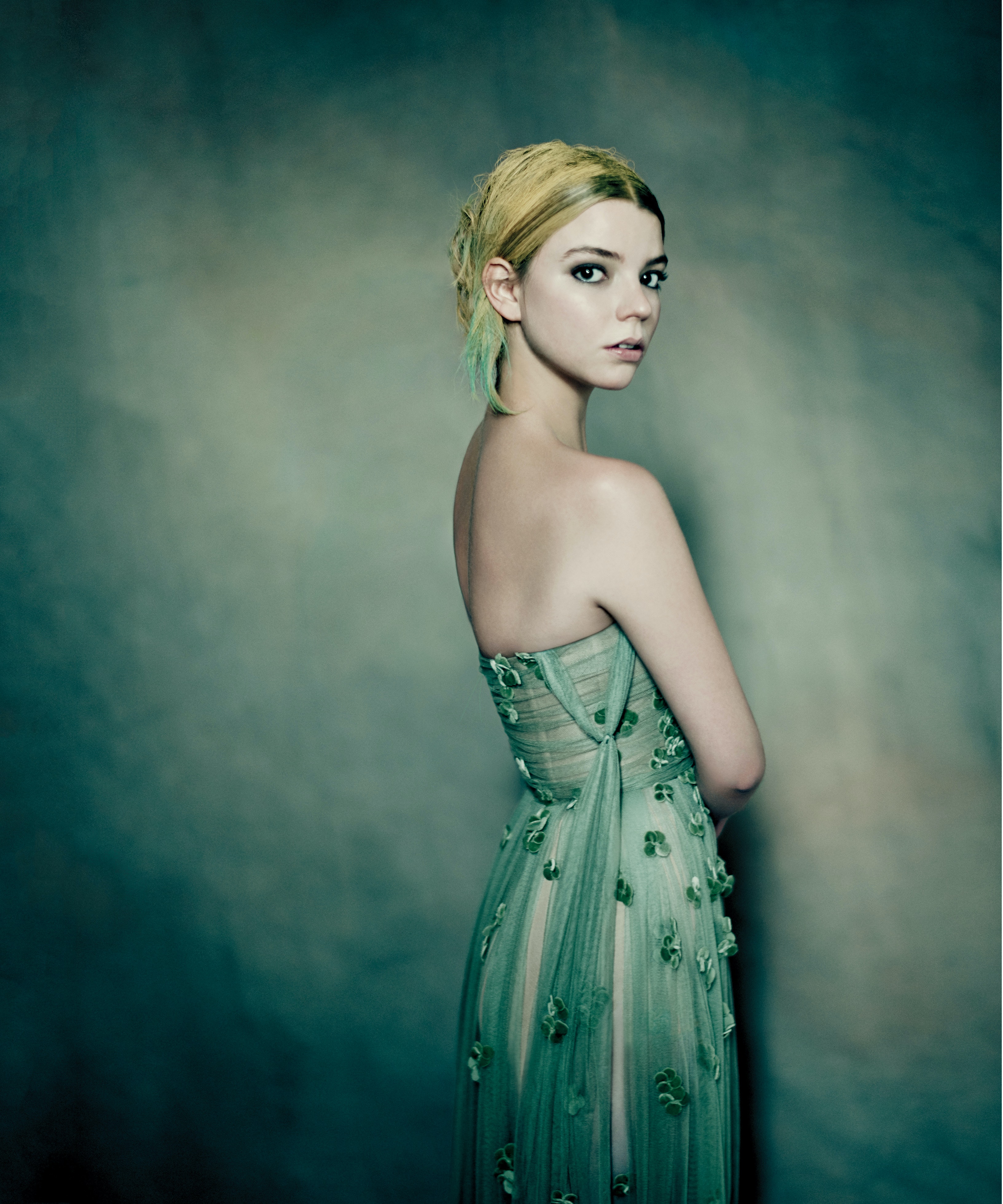 The moment Anya Taylor-Joy stepped into the spotlight as the doe-eyed, porcelain star of The Witch, her unique look rendered her a standout beauty. And in addition to her one-of-a-kind facial features, (which Taylor-Joy told W in a 2016 interview she “didn’t enjoy” and “stopped looking in mirrors for a very long time,”) The Queen’s Gambit actress has a style all her own. Although she has her go-to styles (fluted sleeves, column gowns, sequins, and old Hollywood silhouettes), Taylor-Joy is a fashion dark horse—breaking out club-ready looks at Comic-Con one night, and a frilly frock the next. With every look, the 25-year-old London native stays true to her whimsical, romantic inclinations.

After hosting SNL for the first time this past weekend, Anya Taylor-Joy was seen out and about wearing this Alexandre Vauthier chiffon gown with a feather hem in New York City.

The internet lit up when paparazzi photos of Anya Taylor-Joy and Alton Mason shooting an ad for Tiffany & Co. on the streets of New York City surfaced in April 2021.

The actress went for an avant-garde, art-inspired look for an Emma press event at the Four Seasons Hotel on February 19, 2020 in Beverly Hills.

Taylor-Joy wore Loewe to a special showing of Emma at the Whitby Hotel in New York.

It’s rare to see Anya Taylor-Joy in suiting, but the 25-year-old put her own twist on a gold brocade jacket and slacks by pairing it with a dark lip and sideswept waves.

The actress opted for a nighttime ensemble—and a superlong ponytail—to attend the Glass and Halloween panels during Comic-Con International at the San Diego Convention Center.

Southern California may have brought the party out of Anya Taylor-Joy’s typically romantic, whimsical style. During a night out in San Diego, the London native wore gold, sheer, and a teased hairstyle.

Floral, feathers, and sequins for the soirée at Burlington House in London.

The actress took the Costume Institute Gala’s 2018 theme, “Heavenly Bodies: Fashion & The Catholic Imagination” to the nth degree with this Dolce & Gabbana look.

Mint green and sequins meets a classic Hollywood silhouette at Roundhouse in London.

Even before she starred on The Queen’s Gambit, Taylor-Joy had a knack for a touch of royalty.

This is a quintessentially Anya Taylor-Joy look: headband, soft waves, mixed textiles, and tons of romance.

One thing about Anya Taylor-Joy: she can’t stay away from a sequin.

A bold lip removes any hints of bridal from this look.

The actress wore a bell-sleeved gown to a screening of The Meyerowitz Stories.

The actress’s inclination toward a bell-sleeve gown appeared once more at the Royal Albert Hall on February 12, 2017.

Never one to shy away from a print, the 25-year-old wore this Gucci dress—replete with images of pumpkins and cranes—to the IFP Awards in New York.

A dash of punk rock in London.

Taylor-Joy brought glam to a white t-shirt at the Burberry spring 2016 runway show.

Taylor-Joy added flair to a printed jumpsuit with a belt, metallic platforms, and a 2.55 bag.

Sky blue at the ArcLight.

The assignment: column gowns. And Anya Taylor-Joy understood it.

The actress experimented with print-mixing early on.

The actress’s go-to look is an all-white ensemble.