Ana de Armas whirlwind trip to Mallorca continues as she donned yet another incredibly sexy outfit. The Knives Out actress, 33, was spotted filming an ad for Only Natural Diamonds on the Spanish island as she slipped into a plunging blue swimsuit. Ana rocked the Eres one-piece, which featured a halter top and was cut down past her chest, with a simple strand of diamonds. See Ana rocking her plunging swimsuit while filming HERE.

When she wrapped filming the commercial, which took place aboard a yacht, Ana slipped into a pair of black track pants and covered up with a white button down top. Even better? She looked so happy while leaving the set. This is just one of the fabulous outfits Ana has rocked during her time in Spain. She was spotted on May 13 rocking a hot pink sweater tucked into ripped Daisy Dukes while having breakfast with a mystery man. 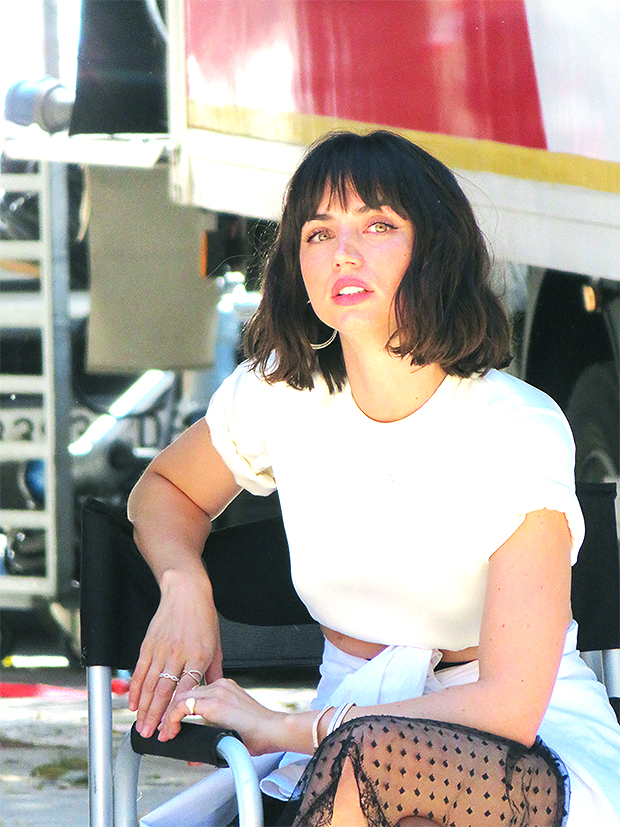 She kept her face mask attached to a delicate chain around her neck for easy access. One day earlier, Ana turned heads in a cropped peasant top with puffed sleeves, dotted with flowers, paired with high-waisted, light jeans. She was seen checking out her phone while tousling her cute bobbed hair during a little moment to herself.

Ana’s time spent in Spain, where she holds dual citizenship (she was born in Cuba) comes amidst ex-boyfriend Ben Affleck‘s shocking reunion with his ex-fiancée, Jennifer Lopez. Ben and Ana broke up in January after less than a year of dating. Ben and JLo’s reunion is thought to have begun in April, when he allegedly sent her flirty emails. JLo’s engagement to Alex Rodriguez was in the midst of ending.

After JLo and A-Rod officially split, she reunited with Ben in Los Angeles, much to fans’ delight. Seventeen years after their 2004 breakup, the twosome went on a trip together to Montana, where they apparently got very cozy. Their rekindled romance is the real deal, a source told HollywoodLife EXCLUSIVELY! “Things between Ben and Jennifer are very casual right now, but it’s happening,” they said.