On growing up in the Bronx, and never truly leaving it. 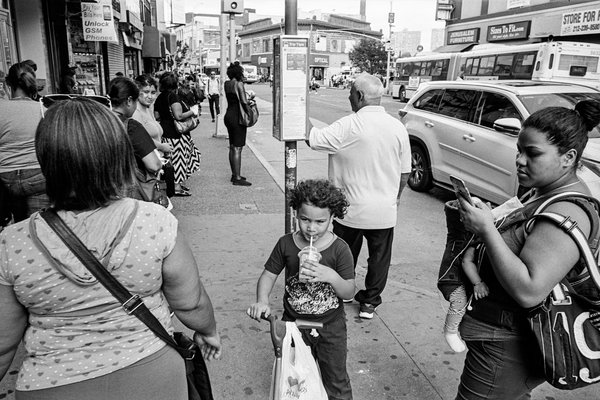 When I was born, my mother and father lived on the first floor of a six-story building in the Bronx that looked just like all the other buildings compressed on my block, and all the other buildings stretching to infinity outside. I shared a small room with my parents, my thin bed pushed into the corner and my window facing a brick wall. I was close enough to hear their fights at night. Close enough to jump into their bed when I was disturbed by a bad dream.

Not long after my twin sisters were born and my father moved out, we migrated to a two bedroom on the fourth floor. I shared another room, this time with a crib and two crying babies. When they became toddlers, all three of us shared a bed. We pulled at our sheets, which never seemed big enough, fighting to keep our hands and feet covered. Once we’d outgrown that setup, the far corner of the room, where my bed and bookshelf were positioned, became the one space I could call my own.

But I wanted more.

I made friends with the kids in my building whose apartments resembled mine. They shared small rooms and snaking hallways with parents, siblings, grandparents and, often, extended relatives from Puerto Rico, the Dominican Republic, the American South and Albania. All of us were looking for any reason to get away, to stretch our limbs, to have private conversations.

So we went outside and called to each other’s windows after school. On weekends, we sat on the curb, waiting for others to appear. Once enough of us had assembled, we transformed our gum-stained blocks into the backyards we never had.

The manhole up the block became home plate for our Wiffle ball games. Wrappers and pieces of cardboard we found became our bases. The last rung of the fire escape ladder that formed a Z down the side of our building became a basketball net.

The full stretch of the block, which had the familiar staples of many blocks in the Bronx — more apartment buildings, a bodega, a Chinese restaurant, a nail salon — became our football field. We lined up on either end and waited until someone called hike! and a ball was launched in the air. Then we stampeded toward each other.

When our long days were over and our nails were black with grime, we crowded around our building’s stoop and shared Honey Buns, potato chips and sugary soda. We pretended to be sportscasters on ESPN, recapping highlights and embarrassments. And once the sky grew dark, we waited as, one by one, our parents called from the window, summoning us back inside.

The memories of our mini-world remain vivid today. But what I don’t remember are the rest of the people my friends and I must have interacted with on the street. The people who skirted around our games. The people who we waited to pass by before our next pitch. The people coming home from work, pushing shopping carts or baby strollers. The people kissing, laughing, arguing, praying — the people existing on our blocks along with us.

It took me leaving the Bronx and observing the way others think about space, or, more often than not, don’t think about space, to realize that what my friends and I were doing was not unique to us, but perhaps unique to our home. For in a borough where the population amounts to 35,000 people per square mile, a borough in which apartments are hoarded together and homes or brownstones are few and far between, it is often necessary to turn what others would see as public space into personal space.

And, because it is the Bronx, after all, that is done with a certain unmatched flair.

In the Bronx, a seat on the Bx1 bus is not simply a seat. It is the scene for a romantic moment between young lovers before they part. In the Bronx, the sidewalk is not a sidewalk. On Fordham Road, where cars and people jostle for openings, the sidewalk doubles as a motorcycle parking spot. On a stretch of the Grand Concourse, the sidewalk serves as a double-dutch amphitheater.

At Orchard Beach, the boardwalk is not a place to stroll and chase pelicans. It is one big dance floor, with distinct sections for salseros and their Bose speakers decked with Puerto Rican flags, freestylers harmonizing and two-stepping to Judy Torres, and youngsters bopping to hip-hop and reggaeton.

A streetlight on Tremont Avenue doesn’t just tell you when to walk, it also serves as pull-up bar or a place to string old sneakers. The Pulaski Park jungle gym is a full-scale calisthenics arena. And an empty wall on Bruckner Boulevard in the South Bronx is not an empty wall. It is a canvass for graffiti legends to memorialize the lives in Puerto Rico claimed by Hurricane Maria that too many have attempted to erase.

When you walk on the streets of the Bronx, there is an undeniable swagger shared by those who are from here. It is innate. It is ancestral. For the streets belong to you, belong to your parents who lived on them before you were born, and in some cases, the ancestors who first laid foot on this country’s soil. Your block is your block. You grew up on it, fell in love on it, fought on it, cried on it and laughed on it.

In my neighborhood of Bedford Park, the patch of space underneath a bodega awning on Creston Avenue once belonged to a man who showed up every day in sunglasses and a baggy suit. The space was his to dance in, sip beer from paper bags in — a space from which he would hold court with those who walked by. In front of my old building on Jerome Avenue, a space was designated for an old Albanian woman. From there, sitting on an overturned paint bucket, she watched her grand children play. Her grandchildren have now borne children of their own and the woman is there still.

She does not need a deed or permit, neither did the man in front of the bodega. It is simply understood among everyone in the neighborhood whom these spaces belong to — and who has attempted to claim them.

When I return home to visit my mother and sisters who still live in the same building I grew up in, within minutes I run into neighbors who once changed my diapers or knocked on my door for rice. We hug, and it isn’t long before they tell me about the new faces emerging from our subway stops and moving into our building. My neighbors tell me about who these faces replaced, about how much they pay in rent, about how rude they are, about the complaints they lodge with management. My neighbors speak with scorn, positing these new faces as invaders.

It’s been five years since I could call Bedford Park my official residence, and yet the feeling of it being mine — the neighborhood, the blocks, the building, the apartment, the little corner in my old bedroom — has not gone away. I’m not sure that feeling ever will.

Andre Wagner is a photographer in New York. Andrew Boryga is a writer and educator in Miami.