Lynda Carter remembered her ‘beloved’ husband of 37 years Robert A. Altman one week after he passed away, calling him ‘the love of my life.’ Read her tribute.

Lynda Carter memorialized her husband of 37 years, Robert A. Altman, with an incredibly emotional tribute she shared to Instagram on February 10. In the post, the original Wonder Woman star, 69, shared an old photo with her beau. Robert gazed adoringly at Lynda, as she struck a pose for the camera while they enjoyed a picnic by the river. “One week ago, my beloved husband Robert A. Altman passed away,” the actress began the caption to her post. 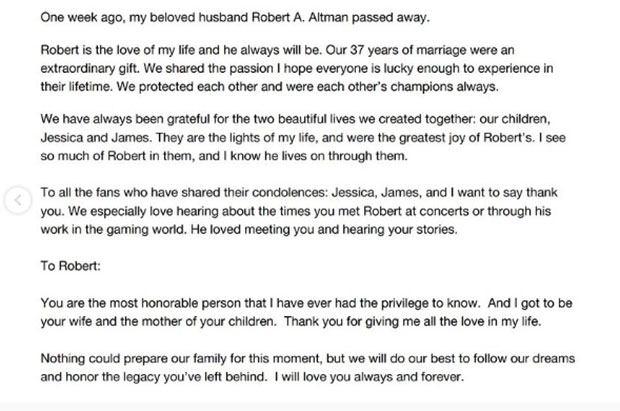 “Robert is the love of my life and he always will be. Our 37 years of marriage were an extraordinary gift,” she continued. “We shared the passion I hope everyone is lucky enough to experience in their lifetime. We protected each other and were each other’s champions always,” she wrote of the video game executive.

Of course, Lynda also mentioned the couple’s two adult children in her remembrance. “We have always been grateful for the two beautiful lives we created together: our children, Jessica and James. They are the lights of my life, and were the greatest joy of Robert’s. I see so much of Robert in them, and I know he lives on through them,” she wrote.

In her tribute, Lynda also left a heartfelt message for her legions of fans, thanking them for their love and condolences during an incredibly difficult time. “Jessica, James, and I want to say thank you,” she said directly to fans. “We especially love hearing about the times you met Robert at concerts or through his work in the gaming world. He loved meeting you and hearing your stories.”

Finally, Lynda concluded her message with one final, touching message to her late husband. “You are the most honorable person that I have ever had the privilege to know.  And I got to be your wife and the mother of your children. Thank you for giving me all the love in my life. Nothing could prepare our family for this moment, but we will do our best to follow our dreams and honor the legacy you’ve left behind. I will love you always and forever,” she wrote.

Between 1975-1979, Lynda was known across the country for her work as the heroine Wonder Woman/ Diana Prince on the iconic TV series. Roughly five years after the show wrapped, Lynda married Robert. The couple welcomed their two children in 1988 and 1990 and were married for 37 years before his death, as Lynda detailed in her loving tribute.