Donald Trump has had a somewhat flip-flop take on the coronavirus pandemic since it started enforcing new guidelines across the U.S. in March 2020. During his time as president, Trump initially played down the severity of the virus in April 2020 and made it clear he didn’t plan to cover his mouth and nose with a mask.

“You do not have to do it. I don’t think I’m going to be doing it,” he said (per BBC) after the Centers for Disease Control and Prevention started to recommend mask wearing. “I just don’t want to do it myself,” Trump continued. “Sitting in the Oval Office… I somehow don’t see it for myself.”

Of course, the then-president Trump and former First Lady Melania Trump then went on to catch coronavirus in October and he spent the weekend in the hospital (via CNN). In a tweet (which has since been removed along with Trump’s entire profile) posted after it was announced he was doing better, Trump — who has been spotted wearing a mask on multiple occasions — wrote, “Don’t be afraid of Covid. Don’t let it dominate your life. We have developed, under the Trump Administration, some really great drugs & knowledge. I feel better than I did 20 years ago!”

Well, it seems like some of Trump’s hotels have a different take on the threat of the pandemic as the Delta variant continues to be responsible for more cases across the U.S.

Many of Donald Trump's hotels have instated COVID-19 mask mandates 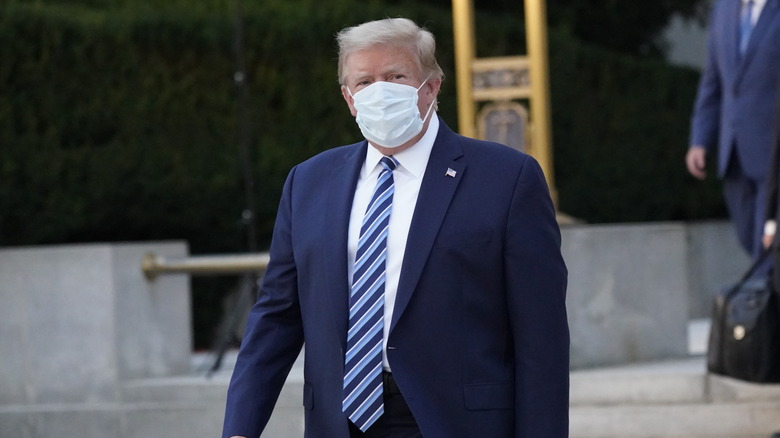 A number of Donald Trump’s Trump hotels have imposed mask mandates, despite Trump’s outspoken opinion about face coverings. According to Newsweek, as the coronavirus Delta variant continues to ramp up in the U.S., Trump’s hotels in Miami, Florida, Chicago, Illinois, and Hawaii are now requiring those inside to sport face coverings. The Trump International Hotel in Miami asks for masks in public places, while The Trump Hotel in Chicago asks employees to mask up, though fully vaccinated guests do not have to.

But that’s not the case for every one of Trump’s properties. Florida’s Trump Golf Club and Trump Winery in Virginia have actually relaxed their mask restrictions, with only unvaccinated staff members having to wear face coverings.

Many of Trump’s fellow Republicans have spoken out very publicly against mandatory mask rules, including Kentucky Senator Rand Paul. However, as pointed out by Politico, Trump has been pretty quiet about the issue publicly since leaving office. Notably, the former president and first lady both got their coronavirus vaccinations before they left the White House in January to make way for the current president, Joe Biden (via The New York Times).