Former President Donald Trump reprised his favorite talking points during a rally in Ohio on June 26. Trump continued to talk about what CNN has dubbed “the big lie,” aka his baseless claims about election fraud in the 2020 election, per the Associated Press. In addition to sharing false claims about the election, Trump is making headlines for his comments about President Joe Biden.

Trump’s campaign rally in Wellington, Ohio, supported Max Miller, a former White House aide who is running against Rep. Anthony Gonzalez, the incumbent Republican in the state. Gonzalez was one of the 10 House Republicans to vote for Trump’s second impeachment for inciting the Jan. 6 insurrection, per The New York Times. Republican Senator Mitt Romney also discussed the former president’s fraud claims in a June 27 interview with CNN. Romney said, “I do think it’s important for each person to speak the truth and to make clear that the big lie is exactly that.”

According to the AP, the Ohio rally was the first of many in the coming weeks. The outlet reported that Trump would have a rally in Florida over the July Fourth weekend. And next week, the former president travels to the U.S. southern border to “protest” Biden’s immigration plans. Keep scrolling to learn what Trump just said about President Biden at the June 26 event.

Donald Trump said 'I told you so' about Joe Biden 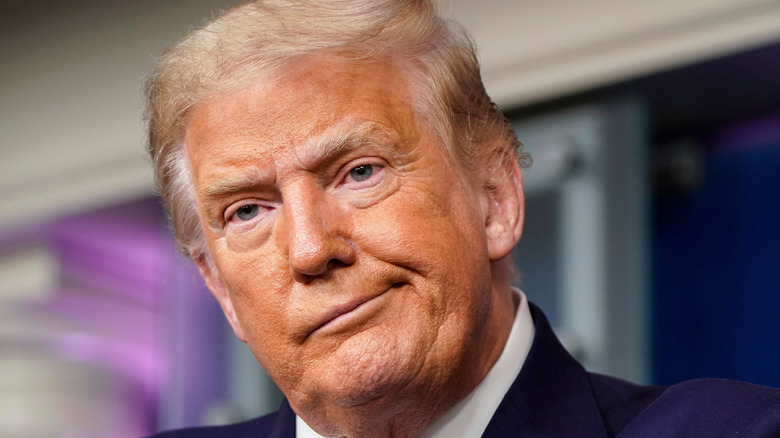 In his first rally since leaving office, Former President Donald Trump told the Ohio crowd about President Joe Biden, “I told you so.” Yahoo! News reported that Trump told the audience, “The media and the Democrats are now admitting that I was right about everything. … Now they’re saying, ‘Well, you know, he was right about these things. That’s all right. Big deal, right?'” he said. “They lied about so many things before the election.”

We haven’t read any news that says Trump was “right about everything,” so we’re taking his statement with a grain of salt. In January 2021, The Washington Post reported that Trump made 30,573 false or misleading claims during his four years as president. According to the outlet, “Trump averaged about six claims a day in his first year, 16 claims day in his second year, 22 claims day in this third year — and 39 claims a day in his final year.”

Reuters reported that Trump told the Ohio audience, “You have millions of people coming into our country. We have no idea who they are. Joe Biden is doing the exact opposite as we did.” Spreading false information about the 2020 election and talking about the southern border appeared to be Trump’s favorite topics during the 90-minute rally — it’s unclear just how those talking points relate to Max Miller’s congressional campaign.