On Etsy, the online marketplace known for feminist cross-stitch samplers and macrame wall hangings, a search for “serial killer” returns nearly 16,000 results. Extending far beyond intentionally macabre portraits of murderers and kitschy needlepoints, there’s a certain subset that looks like a crime-obsessed mom was set loose to design Home Goods’ fall line. There are wood-framed farmhouse signs that say “Welcome” in the swirly script of a modern rustic wedding with “Let’s talk about serial killers” in block print below. You can unwind from a long day with a stemless wine glass that says “True crime, glass of wine, in bed by 9” and wake up to a mug that reads “It’s a coffee & true crime kinda morning.” Some of these generic housewarming gifts refer to actual murderers. There are waffle-textured dish towels and best-selling decorative bamboo cutting boards baring Jeffrey Dahmer’s face and the saying, “If you can’t beat ‘em, eat ‘em,” and a wood-wick Ted Bundy soy candle with the scent label “Volkswagen exhaust.”

Over the past decade, true crime has gone from taboo subject to mainstream obsession. The rise of a booming industry, driven in large part by the advent of crime podcasts like Serial, My Favorite Murder, and the many imitators that followed, has spawned a deluge of merchandise for fans to spend their money on. Increasingly, those products seem designed to appeal to the masses, not just the quirky few. “I’m not going to be surprised when I see T-shirts in Target with these serial killers on them,” says Becky Grieser, who recently began selling true-crime-themed dish towels from her Etsy shop. “It’s going to happen because they’ve gotten so popular.” Like Ugg slippers, Alex and Ani bracelets, and distressed-wood wall hangings that say “But first, coffee,” true crime merchandise has become, in a word, cheugy.

Evan Chisam, who runs the Etsy candle shop Wandering Wick with his wife Christina, says the descriptor isn’t totally off-base. “I guess I can see where it might be compared to that,” he says. “I think the ‘nerd’ culture did similar things with online gaming and streaming. It used to be a small niche, but as times change they become cult classics and are more widely accepted.”

Wandering Wick sells a soy candle labeled “This is my crime show watching candle” beside the “This is my Hallmark Christmas movie watching candle” iteration. Scents are customizable, so the way crime shows should smell compared to Christmas movies is up to the buyer. “Some people may like baked goods or fruity stuff or, you know, something woodsy-smelling,” Chisam says. The shop introduced the crime candle in February, and Chisam says it’s selling on par with the rest of their stock. 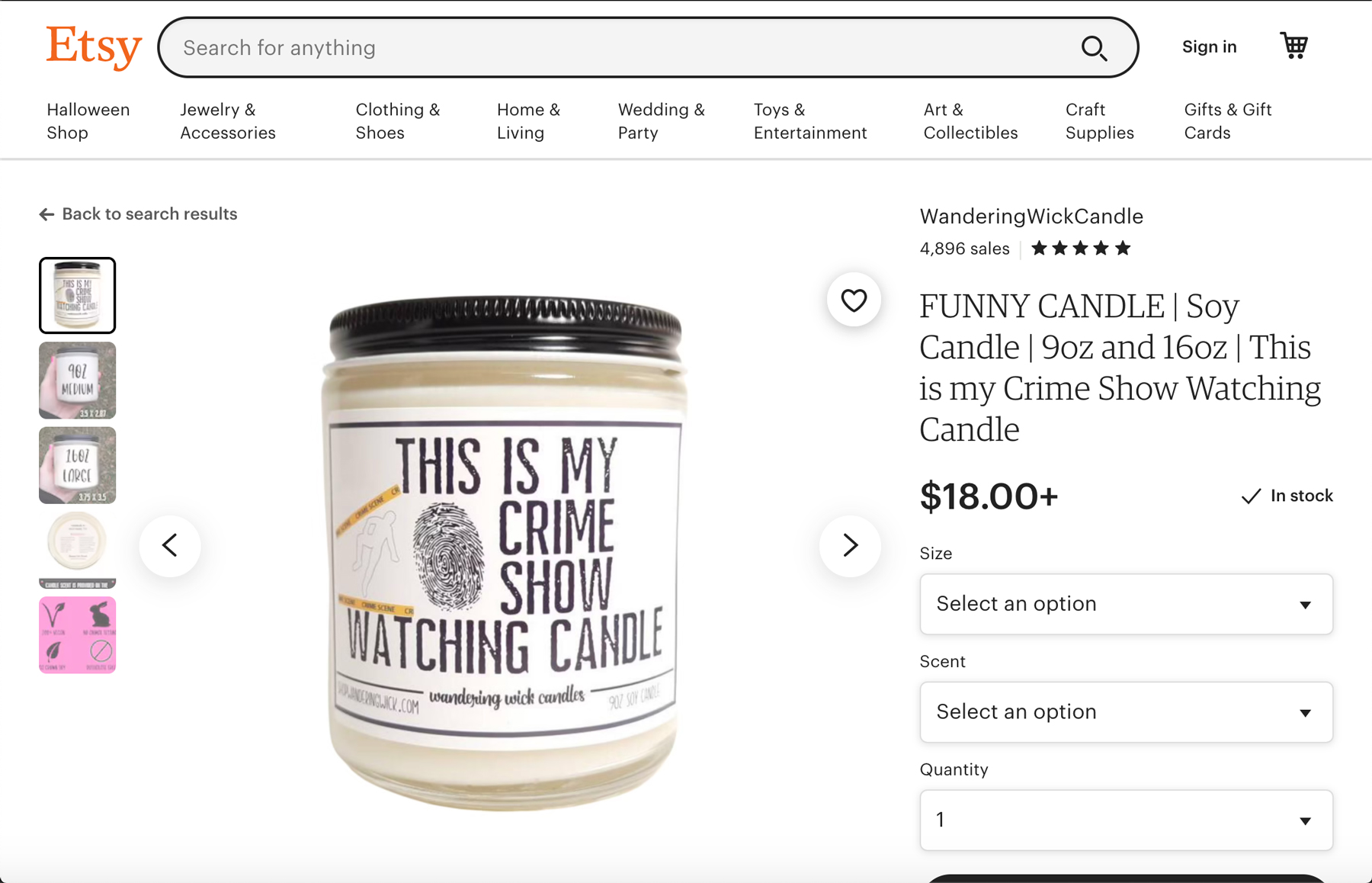 Several other Etsy sellers offer a t-shirt with the text, “It’s either serial killer documentaries or Christmas movies. We either sleighin’ or slayin’!” In an era of guilty pleasure bingeing, Hallmark and Discovery ID devotees appear to have have merged into one twistedly cozy populace.

Sanam Woods of the Etsy shop She Squats Clothing says her true crime products — like a pink sweatshirt that says “Probably thinking about food or serial killers” and a tie-dyed hoodie printed with the phrase, “Anxious, stressed, true crime obsessed” — sell better than her more traditional comfy clothes. “It’s sweatshirts because you’re lying in your bed shoving chips in your mouth and watching murder shows,” she says. “That’s what I do.”

This past spring, when Grieser’s sister suggested she add true crime towels to her shop, 96 Palms, she initially felt hesitant. Before then, she’d sold earrings and a popular array of Schitt’s Creek towels (“Ew, David,” Etc). “At first it was a little bit uncomfortable to have them, because I didn’t want to romanticize serial killers,” she says. But she tried it, pressing her own designs onto microfiber towels. One shows a bloody cleaver next to the exhausted-mom mantra, “Bless this mess.” There are two designs with a black-and-white mugshot of Dahmer. One says “I eat guys like you for breakfast.” The other says “I love you so much I could just eat you.” Grieser has sold more than 400 crime towels in just a few months and plans to continue to meet the demand. “We’re going to be actually adding more, like Ted Bundy and some other famous serial killers,” she says.

Regardless of the growing cheug factor, some designs are still plenty graphic. Dozens of Etsy shops sell one pattern, usually splashed across a shirt but also appearing on a cutting board, that says “Choke me like Bundy, eat me like Dahmer.” Ashley O’Donnell, who sells the shirt in her Twisted Rainbow Shoppe alongside other colorful tees that read “Make heaven crowded” and “Saltwater heals everything,” says the sales speak for themselves. “I didn’t know how people would respond to the design, but it is 100 percent, without a doubt, the most popular design that I have in my store,” she says. When we speak, she’s been offering it for just three weeks, and says it started selling the first day she listed it. O’Donnell is bright and upbeat, and doesn’t shrink from the decision to fetishize two of America’s most reviled killers with such specificity. “I showed my husband that design and he was like ‘That’s kinda sketchy,’ but I was like, people like it.”

In two recent TikTok videos, Jessica Dean, an actuarial analyst who often posts about misinformation on the platform, derided the sale of Jeffrey Dahmer products. She believes the problem with any crime merchandise — cute or not — is the way the true crime industry makes money off of people’s pain. “There’s so much desensitization going on,” she says. “The more you’re willing to dehumanize [victims] and become desensitized, the more money you can potentially make.”

Mary, who runs Sweary Mary’s Offensive Emporium on Etsy and declined to give her last name, says she donates 10 percent of sales from her serial killer products to a charity that supports victims of crimes. Alongside pop-up penis cards and lighters that say “Probably Stoned,” she sells red jar candles covered with pictures and biographies of John Wayne Gacy, Ed Gein, Aileen Wuornos, and Dahmer. “They are informative and serious and more a collectible,” she says. “When we decided to branch into this, we were very aware that we felt a moral obligation to try and counteract the profit we made with giving back to victims of crime in some way.” 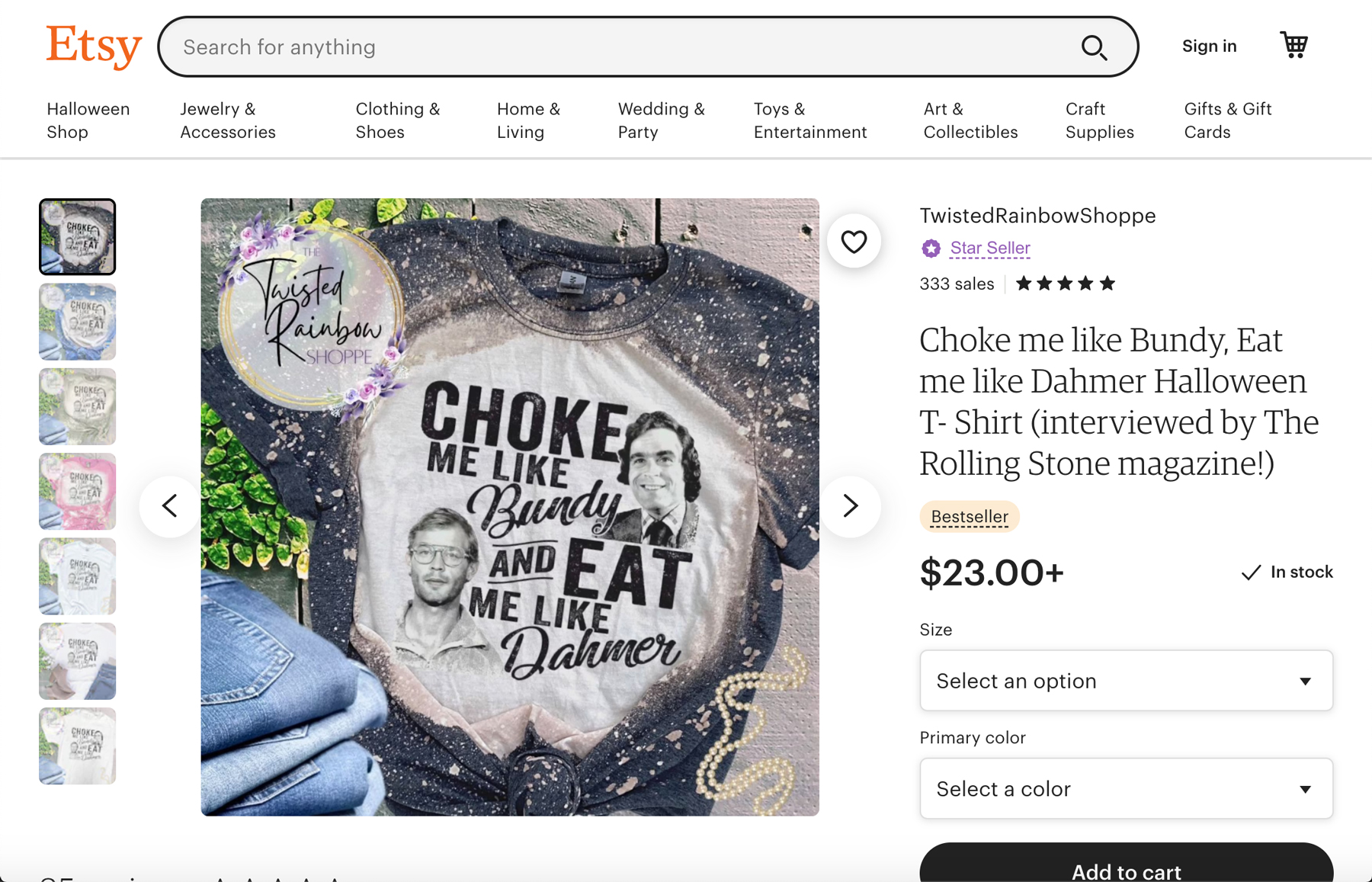 Grieser says most people see her crime towels as a gag gift. “People are seeing it in a humorous way,” she says. “There’s a review that [says] she laughs every time she sees it on her stove.” But pressed on how she feels about the trajectory of true crime from taboo topic to the subject of cheerful kitchen decor, she revisits her original concerns about the products and glorifying murderers. “It’s like, that’s a killer, and now I’m drying my dishes off with them, cutting my tomatoes on the cutting board,” she says. “It really is weird how we turned it around from being this grotesque person to being somebody that makes people laugh. It’s making me think a lot more deeply about these towels.” At the same time, she adds, perhaps humor is a way of defanging these criminals. “It isn’t giving them the recognition that they originally would have wanted,” she says. “Now, they’re being known as a joke, versus a killer.”

Dean recognizes the potential utility of some true-crime media, like TV shows and podcasts that help raise publicity for latent cold cases. She still thinks the commercialization has gone too far. “Somewhere between helping solve a cold case and selling cutting boards on Etsy that say ‘Choke me like Bundy, eat me like Dahmer,’ we’ve lost an interest in actually helping victims,” she says.

O’Donnell stands by her choice to sell the “Choke me” shirt, calling it a conversation-starter that plays to people’s inherently dark love of true crime. “People have just found it fascinating in kind of a sick way,” she says of the entertainment genre. She has not received any negative feedback about the pattern, and thinks that’s in part because people only find her stuff on Etsy if they’re looking for it. “If you’re not looking up Bundy, Dahmer, or serial killers, it’s not going to come across your feed,” she says. “I’m sure there will be people who will be disgusted by the shirt, and they don’t have to buy it.”