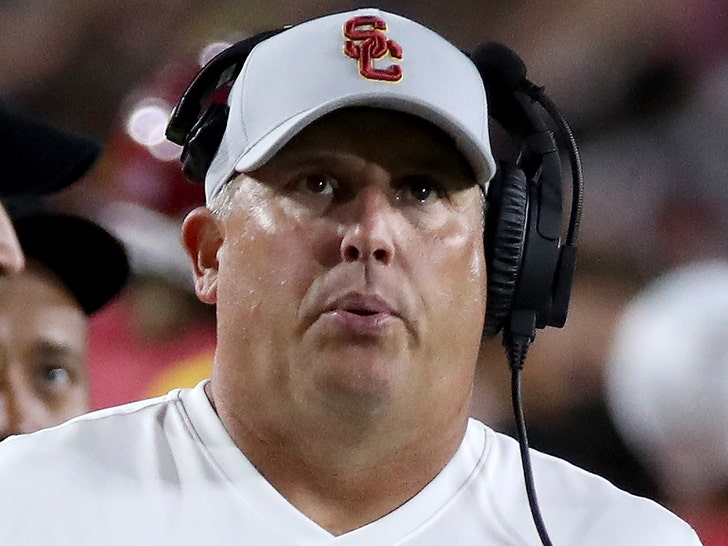 Clay Helton is getting the axe — the University of Southern California has fired its head coach just 2 games into the season.

The 49-year-old had a 46-24 record with the Trojans … but a 42-28 loss to Stanford on Saturday appeared to be the last straw for fans, boosters, alums … and now, school officials.

USC AD Mike Bohn released a statement Monday … saying, “This afternoon I informed Clay Helton of my decision to make a change in the leadership of our football program.”

“Clay is one of the finest human beings I have met in this industry, and he has been a tremendous role model and mentor to your young men. We appreciate his many years of service to our university and wish him nothing but the very best.”

USC legend Keyshawn Johnson tweeted his frustrations with Helton on Saturday … saying, “I’m so pissed, I can no longer FIGHT ON for Him ….. Period  embarrassing.”

But, it wasn’t all bad for Helton’s Trojans — he led USC to a 2017 Rose Bowl win over Saquon Barkley and the Penn State Nittany Lions.

The Trojans won the Pac-12 South 3 times in Helton’s time with USC.

So, why uproot the program early into the season?? Bohn says he felt interim HC Donte Williams is the best coach for the team this season.

“Donte is an experienced and well-respected coach is renowned for this ability to develop relationships with student-athletes, and I appreciate his willingness to take on this challenge.”

Bohn says the decision puts 1-1 USC one step closer to winning a national title … which is the ultimate goal for the organization for years to come.

“With our storied history, our talented young roster, and the major investments we’ve made in the infrastructure of our football organization, I’m optimistic that we are better positioned right now than we have been at any other time in the past decade to recruit the best and right leader for us.”