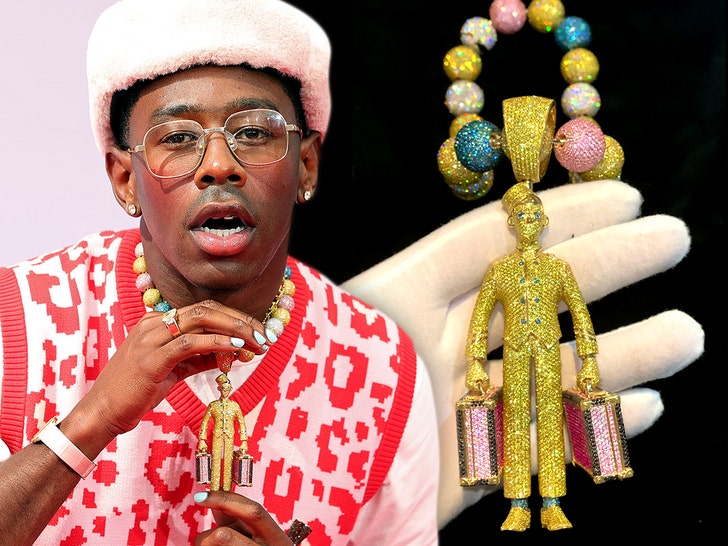 Tyler, the Creator dropped a boatload o’ cash … for 2 tiny but shiny suitcases and one bellhop to carry ’em.

The rapper is celebrating the release of his new album “Call Me If You Get Lost” with a ridiculously expensive chain and pendant. The total cost … a whopping $500k, but ya gotta see the extensive work that went into producing it.

The man behind the masterful work is celeb jeweler Alex Moss, who tells TMZ … Tyler hit him up about 7 months ago to get started on the piece, and it took him 4 months just to find the colored diamonds for it.

We’re told Tyler gave Alex a reference for what he wanted, and they tweaked the design together. You can see the pendant is the bellhop toting 2 suitcases.

As for the meaning behind it … unclear, like a lot of things with Tyler. We’re told the rapper didn’t tell Alex much, as he wanted to keep it a mystery. He can check that box.

No mystery on the hefty price tag, though — the piece has more than 186 carats in diamonds, 60 carats in sapphires and a whopping 23,515 stones were hand-set!!!

Hell, the suitcases even open and close.

Tyler, who is seen wearing the piece in his “JUGGERNAUT” music video, is known for rewarding himself in the most spectacular ways.

As we reported … TTC balled out with a pendant of his album and alter ego “IGOR” back in December 2019. That piece was also dripping in a variety of diamonds and made out of 18k gold.