Simone Biles’ collection of medals has to weigh far more than she does by now, and it doesn’t look like her stash is complete yet. The 4-foot-8 gymnast towers over her competition with an ever-growing list of records. This includes the most medals won at the World Artistic Gymnastics Championships, of which she has a whopping 25. She can also boast being the most decorated American gymnast of all time, thanks to the addition of her five Olympic medals.

Simone’s self-confidence shines through in her performances, and she doesn’t let her haters get her down. Some critics seemingly think that she gloats about being the G.O.A.T., and she had a clear message for them at the 2021 U.S. Gymnastics Championships. She rocked a leotard decorated with a glittering goat head, and she later told Marie Claire that the horned mascot named Goldie was inspired by her haters joking about her putting a goat on her leotard. “And then I was like, ‘Oh, that’s actually a good idea. Let’s make the haters hate it, and the fans love it,'” she said.

Simone is an athlete many young people look up to, and she wants to set an example for her fans by teaching them that being openly proud of your abilities is not a bad thing. “And I want kids to learn that, yes, it’s okay to acknowledge that you’re good or even great at something,” she stated. Keep reading to learn how she became the G.O.A.T. 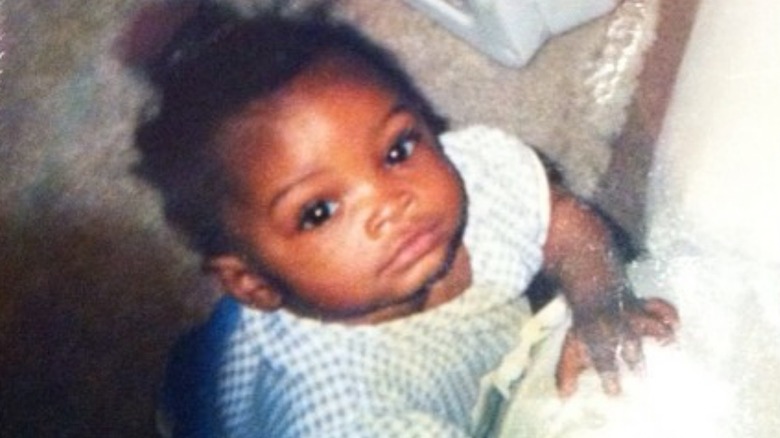 Simone Biles was born on March 14, 1997 in Columbus, Ohio (via Britannica). When she appeared on “Dancing with the Stars” in 2017, she opened up about her difficult childhood. “Growing up, my biological mom was suffering from drug and alcohol abuse and she was in and out of jail,” she said, per Today. On her Facebook Watch series “Simone vs Herself,” she recalled suffering from hunger and neglect. “They would feed this cat and I’m like, ‘Where the heck is my food?'” she stated. When she was 3 years old, Biles and her siblings were placed in foster care.

Three years later, Biles and her younger sister Adria were adopted by their grandfather and his wife. They moved to Spring, Texas, and it’s here that Biles’ raw talent was discovered. In her book “Courage to Soar,” she revealed that her older brother was one of her daycare teachers. When rainy weather forced the daycare to cancel a field trip to a farm, he suggested that they go to Bannon’s Gymnastix gym instead (via the Houston Chronicle). Biles began imitating some of the gymnasts there, and she caught the eye of a coach. “The gym sent home a letter requesting that I join tumbling or gymnastics,” her USA Gymnastics profile reads. She was 6 years old when she began taking gymnastics and was the oldest student in her class, per Time for Kids.

How Simone Biles dealt with a discouraging setback 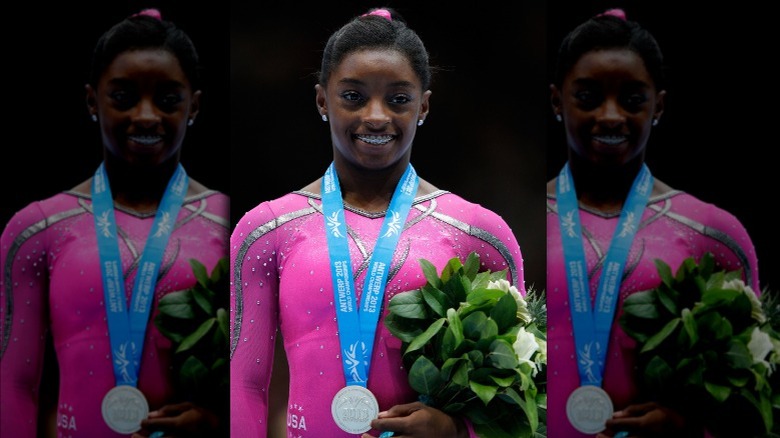 Simone Biles didn’t immediately realize just how good she was. “I just remember being so annoyed, because obviously I was the smallest kid in my class,” she said on “Simone vs. Herself.” “I didn’t see the talent that I had and the pace I went, which was so much faster than my teammates.” Before long, she was competing in events and winning them. In 2011, she took home the gold in the balance beam and vault competitions at the American Classic. The following year, she won the all-around and vault at the same event (via Biography).

Biles might seem like an unstoppable force who has always been on top of her game, but when she made a series of major mistakes at the 2013 Secret U.S. Classic, her self-confidence was shaken. During a 2016 interview with Glamour, her mother explained that she “didn’t think she was good enough to compete” against the other gymnasts, many of whom she looked up to. Biles’ parents convinced her to talk to a sports therapist. “I’ve learned it’s okay to ask for help if you need it,” Biles told Glamour in 2021.

The rest of 2013 looked much better for Biles. She went on to win all-around titles at the P&G Championship and the World Championship. The 16-year-old was clearly back on track, and she told The Guardian that her World Championship gold is what made her finally recognize her own talent.

Simone Biles' life was like a dream after the Olympics 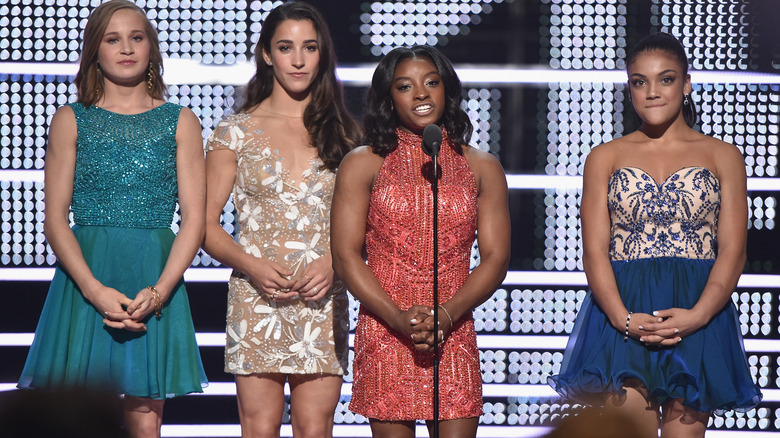 Simone Biles made the decision to go pro in 2015 so that she could pursue her Olympic dreams. At the 2016 Summer Olympics in ‎Rio de Janeiro, she and the other members of the women’s U.S. gymnastics team — Gabby Douglas, Aly Raisman, Laurie Hernandez, and Madison Kocian — were a little like rock stars. They deemed themselves the “Final Five,” and their performances were as definitive as their nickname. They took home the gold as a team, while Biles was the champ in the floor exercise, vault, and all-around events. She also earned a bronze medal for her performance on the balance beam.

Biles immediately became a bona fide superstar. Her celebrity crush Zac Efron flew out to Rio to meet her, and he gave her something just as good as a gold medal: a kiss on the cheek. When she returned home, she attended the MTV Video Music Awards with the rest of the Final Five and got to present an award to Beyoncé. Olivia Munn invited her and Aly Raisman to perform with her on “Lip Sync Battle,” and she appeared in Jake Miller’s “Overnight” music video. She also toured the country with her teammates. “I have like four or five shows in a row, but we are excited about everything we do, because these are opportunities we might not get again,” she told ABC News.

Simone Biles learned a few new skills during a hiatus 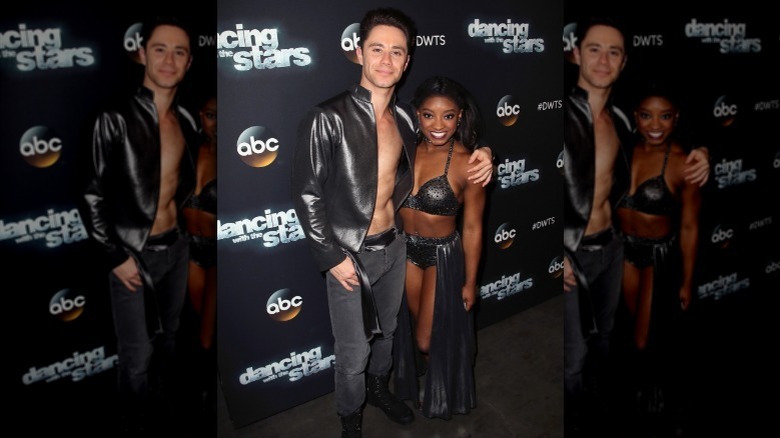 Simone Biles decided to take a well-deserved break from her grueling gymnastics training after the Olympics, but she wasn’t idle. In March 2017, she was announced as one of the competitors on Season 24 of “Dancing with the Stars.” She was partnered with Sasha Farber.

One of Biles’ memorable moments on the show came when the judges criticized her for not bringing enough emotion to her performances. Host Tom Bergeron asked her why she seemingly ignored their advice by not smiling during her second dance of the night, and she taught him something about competitive gymnastics. “Smiling doesn’t win you gold medals,” she said, per Today. And, as it turns out, dancing doesn’t get you a six-pack — Biles told Us Weekly that her abs disappeared during the competition.

Biles made it to the semifinals, but finished in fourth place after a shocking elimination. Singer Normani Kordei, NFL player Rashad Jennings, and professional baseball catcher David Ross competed in the finals, with Jennings ultimately taking home the Mirrorball trophy. While Biles didn’t win, she found value in the experience. “It (the show) really does change your life. Everybody goes in and comes out a different person,” she told the Houston Chronicle. “You learn to be confident not only in gymnastics but outside as well.”

Simone Biles has someone special to cheer her on at Tokyo 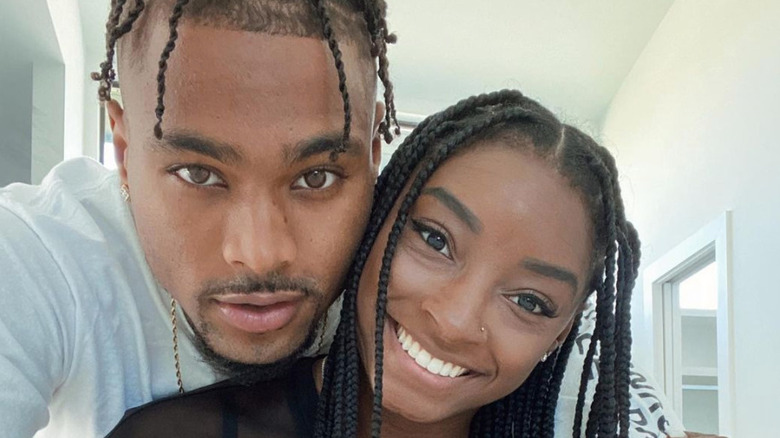 When Simone Biles returned from her hiatus, she looked better than ever. At the 2018 World Gymnastics Championships, she took home the gold in the all-around and floor routine competitions, and her balance beam routine earned her a bronze medal (via USA Today).

In 2020, she scored big in another way when she began dating Houston Texans safety Jonathan Owens. The couple met on the dating app Raya (via Glamour), and Owens was clueless about how big of a deal Biles was. “I honestly didn’t know who she was. It was just kind of like, ‘Oh, she got a lot of followers, she must be pretty good or something,'” he recalled on “Simone vs. Herself.” Biles said that she and Owens “definitely get each other” and are “best friends.”

Sadly, Owens won’t be sitting in the crowd at the delayed Tokyo Summer Olympics due to the ban on spectators, but he’s still a part of the solid support system that will be cheering Biles on from afar. And surely a silent gym can’t seem too daunting after becoming the first woman to perform the difficult Yurchenko double pike vault during a competition. “I’m super excited about it,” Biles said during an interview with InStyle. “I know it’ll be different, not like the Olympics we’ve ever had before, but I also think that’s what makes it special too.”