Not stopping there, the ‘Pretty Boy Swag’ rapper also appears to challenge the ‘Donda’ artist to a boxing match, writing on his Twitter account, ‘Let’s get in the ring?’

AceShowbiz –Soulja Boy apparently isn’t done ripping Kanye West on social media. The “Kiss Me Thru the Phone” rapper took to his Twitter account to further put the “Donda” artist, calling him out for his controversial antic against Taylor Swift at the 2009 VMAs.

On Tuesday, August 31, Soulja wrote on the blue bird app, “U P***y. U really wore that trump hat too.” Draco then addressed Kanye’s controversial move when he interrupted Taylor’s speech when she was announced as the winner of Best Female Video for “You Belong with Me” at the event. “You did a-lot of corny s**t in ur career and got a pass. B***h a** n***a apologize to Taylor swift @kanyewest.”

Soulja also added, “If u would have ran on stage and snatched a mic from my hand I would have knocked yo a** out live on MTV.”

In a separate post, the “Pretty Boy Swag” spitter bragged about being “the first rapper” with Kanye’s estranged wife Kim Kardashian. Not stopping there, Soulja also appeared to challenge Kanye to a boxing match, writing, “I wanna fight. Do u know how to fight? @kanyewest I feel like u a h*e. Let’s get in the ring? I don’t take s**t from NOBODY. I don’t give a f**k who u are.” 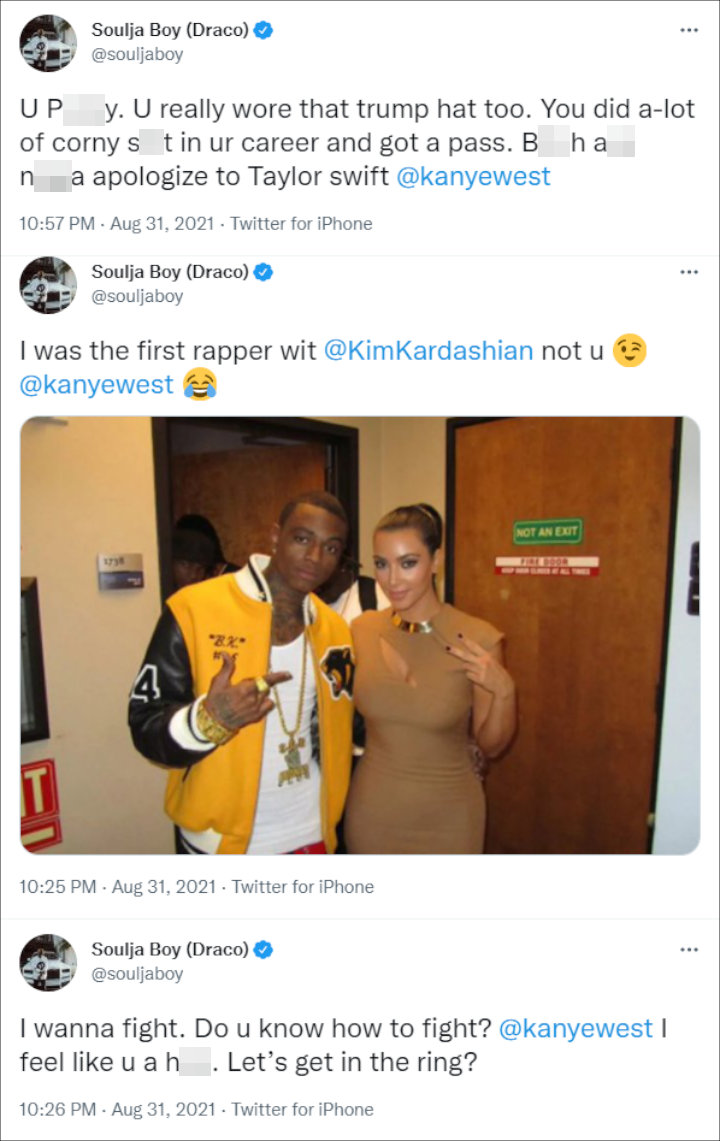 Soulja Boy slammed Kanye West in a series of tweets.

Soulja has been taking digs at Kanye as he claimed that the “Gold Digger” rapper removed his verse on “Remote Control” which was included in his new album “Donda”. Following the album’s release on Sunday, Soulja shared text messages from Kanye that read, “I love you bro. You’re a genius. Wanna work with you on the new GAP campaign. And my new album.” The song, however, features Young Thug instead.

After calling Ye “weird af,” Soulja tweeted at the time, “Idk how to feel, Kanye sent me that song ‘remote control’ and I don’t hear my verse on it. hmm f**k that n***a.”

“Donda” was put available on the Apple Music and Spotify platforms early on Sunday morning. Kanye, however, claimed that it was released without his approval. Slamming his label, the rapper tweeted, “Universal put my album out without my approval and they blocked ‘Jail 2’ from being on the album,” referring to his and DaBaby‘s collaborative track which was supposed to be featured on “Donda”.