Some could argue that reality star Teresa Giudice is the backbone of Bravo’s The Real Housewives of New Jersey. Giudice and her family have appeared on the show since its first season, and she is the only cast member to have remained a star through its current season.

Though Giudice has earned her share of fans through the years, her attitude has never gone unnoticed. Now, thanks to several recent outbursts during season 12, specifically toward Margaret Josephs, some fans are turning on the RHONJ star.

‘RHONJ’ star Teresa Giudice’s attitude has made her iconic

Giudice has created some memorable moments as a star of one of Bravo’s Real Housewives franchises. Her biggest claim to fame might be her infamous table flipping scene in season 1, when she pushed a table in frustration after she suspected Danielle Staub of lying.

Since then, Giudice has developed a reputation for having quite the “Jersey” attitude, which has made her nothing short of iconic; she’s the longest-standing RHONJ cast member.

Giudice has had a number of outbursts toward other cast members, including her previous feud with sister-in-law Melissa Gorga (who can forget the sprinkle cookies?) and, most recently, co-star and former friend Margaret Josephs. 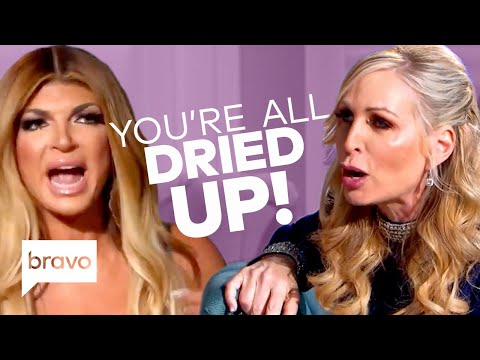 Some fans are unimpressed with Teresa Giudice’s recent behavior

Teresa Giudice and Margaret Josephs used to be close, but season 12 brought out the worst in the two women. When Giudice began dating her now-fiancé Louie Ruelas, Josephs openly discussed rumors of Ruelas’ past with the other women on the show. Giudice has been known to go to any length to protect her loved ones, and Josephs’ words about Ruelas pushed her over the limit.

During the last few episodes of RHONJ, Teresa Giudice has had it out for Josephs. She body-shamed Josephs during a charity softball event, suggesting Joseph’s butt wouldn’t “jiggle” so much if she’d been wearing the leggings Giudice designed. Plus, during a trip to Nashville, Giudice threw a drink at Josephs from across the table, creating a mess and staining Josephs’ white dress — and fans have just about had it. Many showed their disdain in the Instagram comments of a photo Giudice posted with Ruelas on April 12.

“Your behavior is embarrassing,” one user wrote on the post.

“Maybe the reason you were standing alone is because you were 100% wrong,” another person commented, in response to Giudice’s caption.

“Everybody was enjoying themselves, and you killed the whole vibe,” a fan wrote in response to Giudice throwing her drink.

Though fans can say what they want, Giudice hasn’t let the negativity get in the way of her fairytale romance with Ruelas. The couple recently moved into a new home together, and they are currently planning their wedding. Plus, plenty of fans still adore Giudice and couldn’t be happier for her romance with Ruelas.

“Such a beautiful couple … keep shining!!” someone wrote on the same photo.

“You don’t stand alone xoxo we have your back,” another fan added.