Strictly Come Dancing’s head judge Shirley Ballas was accused of being “disdainful” towards Fleur East as she ended up in the bottom two following a tense public vote. Some fans were left furious when they learnt that Shirley would have saved Richie Anderson and his dance partner Giovanni Pernice over Fleur, if she’d had the final say.

Some viewers were so livid that they called for her to be removed from her role on the judging panel. One Twitter follower exclaimed: “If Shirley genuinely thought Richie was better than Fleur (which I’m sure she didn’t) then she shouldn’t be a judge on Strictly anymore, let alone Head Judge.”

Shirley was also accused of displaying favoritism towards young men, and downplaying the positive aspects of Fleur’s performance, after she took to the stage in a costume with seashell-shaped bra cups to channel the Little Mermaid on Saturday.

On Monday, Shirley took to Twitter to clarify to her almost 80,000 followers that she was ready to put the episode behind her.

“I have received many apologies over the weekend regarding hurtful messages I’ve received on social media,” she wrote. 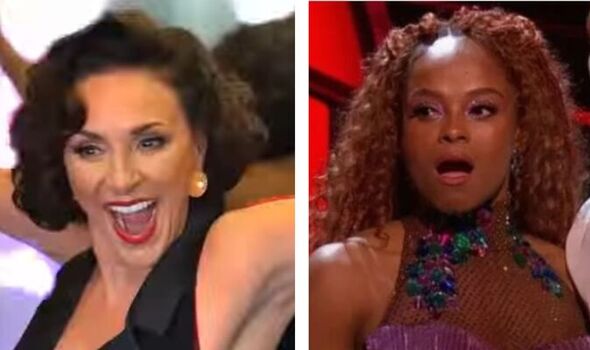 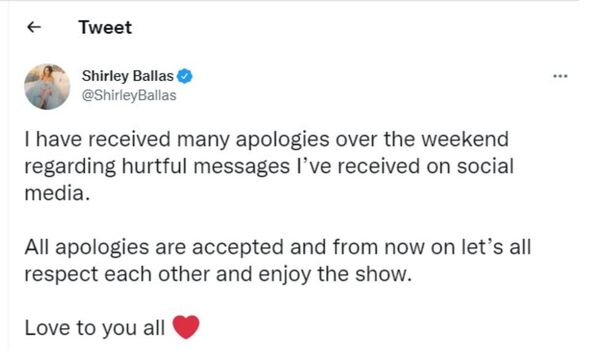 “All apologies are accepted and from now on let’s all respect each other and enjoy the show. Love to you all.”

However, that scarcely stopped the stream of negative comments that some unrepentant fans were still sending.

@homoboy1983 hit back: ” I think you owe [Fleur] an apology, not a public one but reach out to her personally.”

The irate fan also warned Shirley: “This whole thing will knock her confidence.” 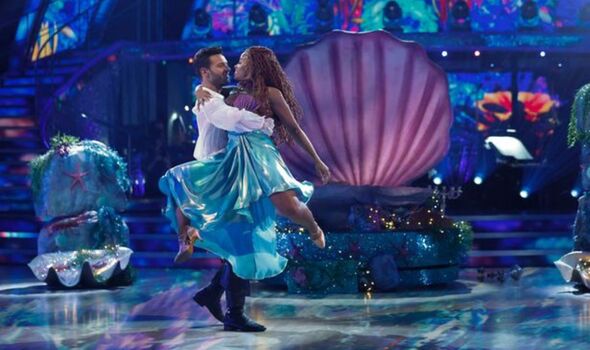 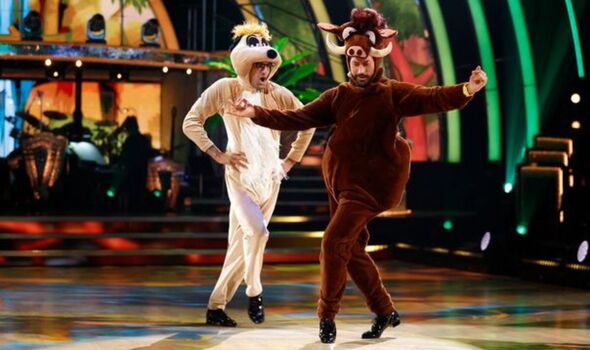 @MJ_JJ061215 made it clear that nothing less than a public apology would cut it when she added: “It is a disgrace the way she has acted towards Fleur over the weeks [and] she always favours the men!”

@BrazenHussyRuth agreed: “I would happily tell her to her face how upsetting and insensitive her comments are.”

@janettinnelly chimed in: “I’m sorry I think your treatment of Fleur East is downright appalling.”

Meanwhile, Campbell1Lulu wrote: “We would all respect you if your comments and scores were not so biased, you have clear and obvious favourites whilst your disdain for others is painful to watch and hurtful for those on the receiving end.

“Fair does not appear to be part of your vocabulary,” she concluded angrily.

“Perhaps Shirley, if you had a kinder word or two for some of the female contestants there would be less criticism pointed towards you,” @CoxGitti added.

“In my opinion being ‘kind’ works both ways!”

In spite of the continuing criticism, she also received support from some of her followers, who sympathised over their beliefs that she had been “bullied”.

Pointing out that she was a professional doing her job by giving an expert opinion, some queried what Shirley should be apologising for.

@Saphira88 wrote: “There is no need for such horrible behaviour from supposed ‘fans’ of the show. Hiding behind screens is the problem, they would never say it to your face.”

@DanielTayloresq concurred: “My girl once again standing up to the bullies. Bullying of any shape or kind has no place in society. With you all the way lovely xx.”

Meanwhile, @KimNiccholls16 offered her some advice, reminding “Positive critique is good and helpful – but downright negative critique can be very damaging and harmful.”

Strictly Come Dancing returns this Saturday at 6:30pm on BBC One.