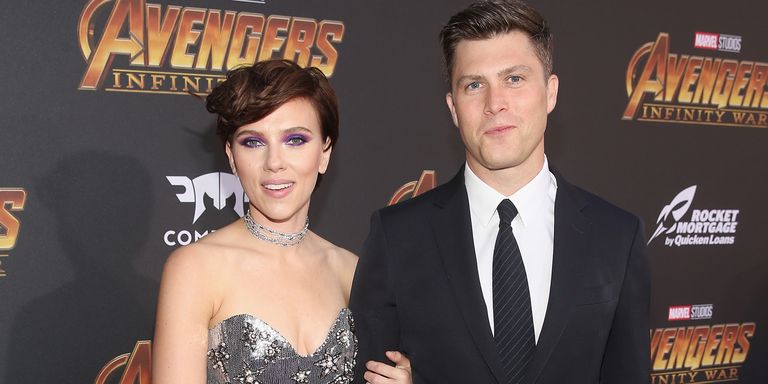 After sparking dating rumors nearly a year ago, Scarlett Johansson and Colin Jost made their official red carpet debut as a couple last night.

Attending the premiere of Johansson’s upcoming film, Avengers: Infinity War, in Los Angeles, the two looked completely smitten while posing for photos. For their first red carpet together, the actress stunned in a sparkling metallic Erdem gown adorned with ornate silver beading. She paired the dress with a silver chain choker, polka-dot tights and black strappy heels.

The new couple couldn’t keep their eyes off each other while walking hand-in-hand down the red carpet.

Jost is best-known for his work as a writer and comedian on Saturday Night Live, where the two were first spotted together in May of 2017. The actress made a surprise appearance on SNL and was spotted getting cozy with Jost later that evening at the show’s after party. The two have kept their relationship mostly under wraps and low-key since then.

Johansson did, however, talk about their relationship yesterday on The Ellen Show. During the show, DeGeneres showed the actress an embarrassing throwback picture of Jost before his time on SNL and things escalated from there…