Now that Prince Harry and Meghan Markle have welcomed their second child, all eyes are on the Duke and Duchess of Sussex to see what their next move will be — and when. The couple has been popping up left and right this year, between their viral interview with Oprah Winfrey that aired on March 7, and their appearance at the Vax Live concert that aired on May 8. According to Newsweek, Harry has cleared his schedule for “several months” so that he can spend time with his newborn daughter.

However, Harry is expected to travel to the UK next month for the unveiling of a statue that is to be erected at the Sunken Gardens at Kensington Palace in honor of his late mother, Princess Diana. Now that Lilibet Diana has been born, many are wondering if Meghan will make the trip along with her husband. If Meghan does decide to attend the ceremony with Harry, it would mark the very first time that she’s returned to the UK since leaving in early 2020. And with that, of course, comes a lot of questions, which one royal expert has highlighted on Twitter. Keep reading for more.

Queen Elizabeth has a 'soft spot' for Prince Harry 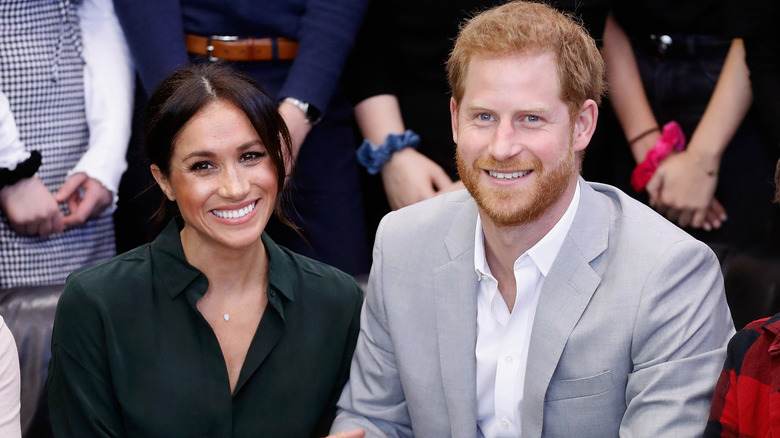 Royal expert Angela Levin took to Twitter following chatter that Meghan Markle might attend the unveiling of Princess Diana’s statue on July 1 at Kensington Palace in the UK. “Lots of questions to ask about Meghan at Harry’s side for the Diana statue unveiling ceremony. Will Archie come and if so will he meet his father’s family? Does she need the spotlight? How long will they stay?” Levin tweeted. However, the very end of her tweet brought up something quite interesting. “Could [Meghan] be nervous of the Queen’s influence on her grandson?” Levin asked.

Levin’s question suggests that the queen could perhaps influence Harry to move back to the UK, or otherwise participate in things associated with the royal family, thus pulling him away from his family and the life that he has created for himself in California. It seems, however, that Harry has a great relationship with his grandmother, and that there’s a level of understanding there. In fact, royal biographer Penny Junor told Express that the queen has “a very soft spot for Harry.” If this is true, would the queen actually try to influence Harry in a way that would disrupt his life with Meghan and their two children?

There are only a few people who know the truth on the matter, and chances are, none of them are going to speak out about it.