Bill Cosby’s sexual assault retrial ended Thursday with his conviction on three counts of aggravated indecent assault. This has been a long time coming for the victim in this case, Andrea Constand, who said the comedian, now 80, assaulted her 14 years ago, and a small victory for the many other women who claim they were also drugged and victimized by Cosby as far back as the 1960s.

Cosby’s victimizing went on for decades — in his own deposition testimony, he admitted to giving quaaludes to women he wanted to have sex with in the ’70s. It wasn’t until October 2014 that this whole thing really blew up, and it was — of all people — another comedian, Hannibal Buress, who got it going. That’s when the former “Saturday Night Live” and “30 Rock” writer and actor (“Neighbors,” “Broad City”) called out Cosby during a standup show.

“Bill Cosby has the f**king smuggest old black man public persona that I hate,” Buress said. “‘Pull your pants up, black people. I was on TV in the ’80s. I can talk down to you because I had a successful sitcom.’ Yeah, but you raped women, Bill Cosby. So, brings you down a couple notches. I don’t curse onstage. But yeah, you’re a rapist.”

Buress’s comedy bit about Cosby from 2014:

Buress continued, “I want to just at least make it weird for you to watch ‘Cosby Show’ reruns. If you don’t know about it, trust me. When you leave here, Google ‘Bill Cosby rape.’ That s*** has more results than ‘Hannibal Buress.’”

Footage of his act went viral, and people finally stopped to really consider what had been a well-circulated rumor in the entertainment industry. It took on a life outside of social media with news organizations starting to report on it, including CBS News with “Who is Hannibal Buress, and why did he call Bill Cosby a ‘rapist’?” a month later. More important, brave women started speaking out — and didn’t stop. So many women — dozens — accused him of the same thing.

Soon, Cosby, who had a family comedy in the works, lost that show amid the widespread backlash, (finally) pulled the plug on his own comedy tour, and soon found himself at the center of legal action. Constand’s is the only criminal case so far, but other accusers have filed civil suits. He also filed civil suits of his own. While the accusations against Harvey Weinstein last year are credited for birthing the #MeToo movement, the women accusing Cosby had their own even before that. Five of Cosby’s other accusers testified against him in this retrial — including model and TV personality Janice Dickinson, who is perhaps the best known of the bunch — which took place less than a year after another jury deadlocked on the charges. 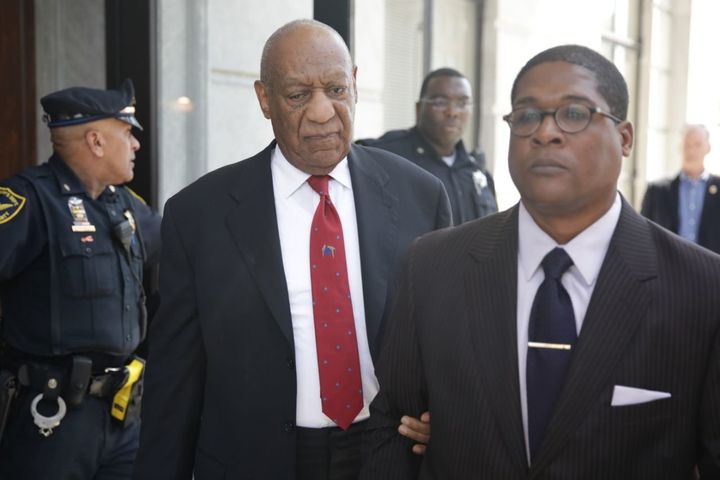 Buress spoke about being pulled into the Cosby narrative in 2015. “You can’t predict s*** like that,” he told GQ. When the interviewer brought up his being a “feminist hero,” he replied, “People are going to put on you whatever they want to put on you. It is conflicting, because people think I’m like this amazing guy or something. I’m a decent guy.”

Not everything about it was good. A special he was doing with Comedy Central was delayed due to the controversy, but the show went on to air soon after.

In 2016, during a Netflix panel discussion, Buress said it was a weird surprise that his joke had had such an impact. “I was doing a joke in my show, and that shouldn’t influence public opinion. I don’t know if it should go that far. It’s weird to me that a joke did that.” He also noted that there was more to his routine than Cosby jokes. “I do a lot of other s***,” he said. “It’s weird that it happened like that. I was calling a bunch of other comedians rapists, and that was the only one people took seriously. That’s just one joke people took and really ran with it.”

Buress has gone on to have more success in recent years, but fellow comedian Patton Oswalt said Cosby had nothing to do with it. “Hannibal was doing fine without that [Cosby controversy],” he said at the same panel. “He’d be sitting here now if that had not happened. … That’s just incidental to where he was going anyway.”While Buress’s act isn’t focused on Cosby jokes, he did crack another one that got some headlines in 2015. At Justin Bieber’s 2015 Comedy Central roast, he said, “I hate your music more than Bill Cosby hates my comedy.”Buress hasn’t yet spoken out about Cosby’s conviction, for which the disgraced comedian faces up to 10 years in prison for each of the three counts, despite Yahoo’s request for comment via his legal rep. Seems likely he’s saving it for his standup.