“This thing is scary as hell. And whatever you’ve been willing to do to risk getting it, don’t. Just don’t do it,” Maddow says in her first show since Nov. 5 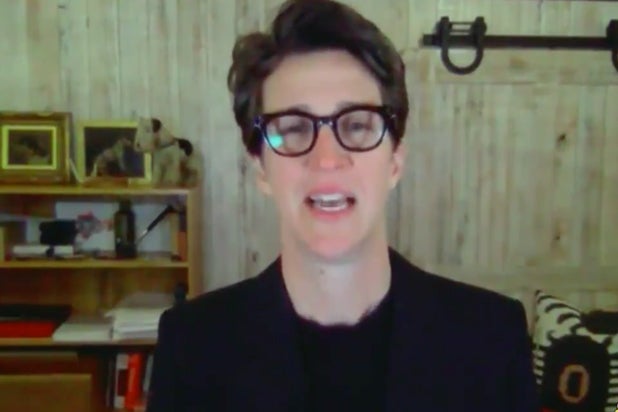 Rachel Maddow returned to her MSNBC program on Thursday night and opened the show by disclosing to her viewers that her longtime partner, Susan Mikula, was recovering from COVID-19 — and that things at one point were so bad, she thought Mikila was going to die.

Maddow had announced on Nov. 6 that she was going into quarantine after being in close contact with someone who tested positive for COVID-19, but she did not reveal at the time who that was. And on Thursday’s show, Maddow explained that Mikula, her partner for over 20 years who she called “the center of my universe,” tested positive the same day Maddow tested negative.

“Susan has been sick with COVID these past couple of weeks. And it one point, we really thought that there was a possibility that it might kill her. And that’s why I’ve been away,” Maddow said. Fortunately, Mikula is now recovering and “we’re not scared anymore like we were,” Maddow said.

but the experience was clearly harrowing, and so it is that Maddow devoted the bulk of her opening with a serious message for her viewers: Take COVID-19 seriously.

“I don’t know you at home except through this medium. But believe me, whatever you have calculated into your life as acceptable risk, as inevitable risk, something that you’re willing to go through in terms of this virus because statistically, ‘hey probably it will be fine for you and your loved ones,’ I’m just here to tell you to recalibrate that. Frankly the country needs you to recalibrate that, because there is no room for you in the hospital anymore,” Maddow said.

“But please, just also know,” Maddow added, “that whatever you think of your own life and however much risk you are willing to take on for yourself, that’s not how this works. What you need to know is whoever is the most important person in your life, whoever you most love and most care for and most cherish in the world, that’s the person who you may lose. Or who you may spend weeks, up all night freaking out about, calling doctors all over the place, over and over again, all night long, trying to figure out how to keep that person breathing and out of the hospital.”

“Just, whatever you’re doing, however you calibrated risk in your life, don’t get this thing. Do whatever you can to keep from getting it. For Thanksgiving next week, you really are going to just have it at home without people coming over,” Maddow said. “And yeah, that is going to suck, but that is going to suck so much less than you, or somebody else in your family getting this and getting sick. Trust me.

Maddow concluded with the following:

“And, I think I know you well enough because I know me well enough, I’m guessing that you might be willing to risk yourself. Especially after all these months, and all this time, it’s so frustrating, right? I would have done anything, moved mountains, for it to have been me who was sick these past couple of weeks instead of Susan. I still would give anything for that. But this thing does not give you that choice.”

“You can’t say ‘I’m willing to just get it myself and play the odds.’ You don’t get that choice. It won’t necessarily be you. It’ll be the person you most care about in the world, and how can you bear that? And all you can do to stop that is move heaven and earth not to get it. And to not transmit it.”

“I will just tell you personally: This thing is scary as hell. And whatever you’ve been willing to do to risk getting it, don’t. Just don’t do it.”

Watch the clip below.