Let’s say you’re the queen of England (work with us here), and you need to get out of a conversation or awkward social situation like now, but being polite to people is kind of a key part of your whole job. What do you do? You establish a system of subtle but unmistakable secret signals to exchange with your staff, of course.

Queen Elizabeth and the British monarchy as a whole are famed for their elaborate etiquette rules and codes of conduct. Royal family members aren’t allowed to go bare-legged, per Who What Wear, or comment on politics, for starters. And that’s before we’ve even gotten into rules about curtsying, where to stand, where to walk, and what everybody’s official title actually is. The queen doesn’t get to just excuse herself when she needs to get going.

Instead, she communicates with her staff using some pretty sneaky clues. If you look closely at her next public appearance, you may even be able to catch some of them. Get the details below. 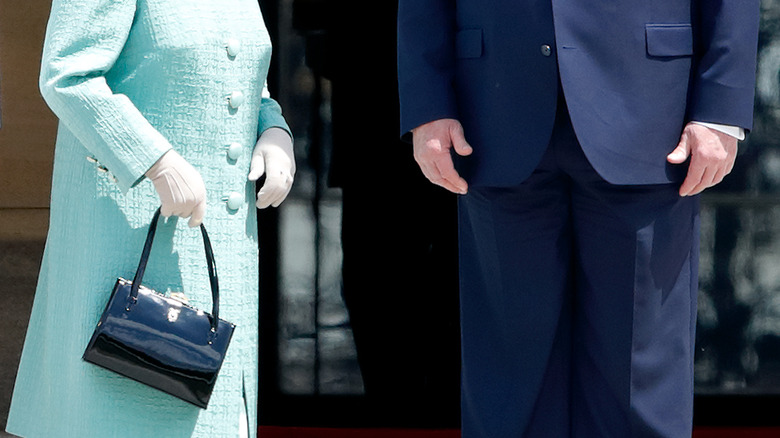 If you were trapped in an interminable conversation at a family gathering or a party and you wanted to send your date a social SOS signal, you might shoot them a quick text or a panicked wave. The queen communicates largely via handbag.

Queen Elizabeth always has her handbag on her. But if she “switches her bag from one arm to another,” that means she’s ready to wrap it up, and one of her handlers will come swooping in to politely take her to speak to someone else, according to People. If she’s at dinner and she moves her handbag from the hook under the table to the tabletop, that’s her staff’s five minute warning to end the meal, per The Telegraph.

Worst of all is if you see the queen move the bag to the actual floor or begin to twist her wedding ring around her finger, according to People. That is monarch-speak for, “Get me the eff out of here, stat.”

Now that we know all of that, excuse us as we leave to start analyzing all recent photos and videos of the queen visiting with famous people to see how she really feels.