Crystal Blease appears to call out her ex-boyfriend and the ‘Pop Out’ rapper for allegedly cheating on her during their relationship while gushing about her new girlfriend, whom she calls Jazz.

AceShowbiz – Polo G‘s baby mama has apparently moved on from their failed relationship and found new love in a woman. Crystal Blease has been bragging about being happier now after reportedly dumping the rapper for her new girlfriend.

Crystal, who is the CEO of her own beauty brand Beauty By Bratitude, has been taking to Twitter to gush about her new relationship while seemingly blasting her ex-boyfriend for allegedly cheating on her. “I was sitting there putting up with infidelity and my soulmate was a f**king girl. I knew it,” she wrote in one of her recent tweets.

In another post, she gushed about her girlfriend, whom she calls Jazz. “Jazz be doing s**t I been begging for, with ease I ain’t coming up off her EVER,” so the social media personality tweeted earlier this week.

She also hinted that she and her girlfriend may be living together as writing, “I sleep tangled with Jazz every night.”

Having left the past behind, Crystal seemingly told her followers that she doesn’t need to know about what her ex-boyfriend is up to. “Don’t update me about nobody. & don’t update nobody about me,” read her cryptic tweet. 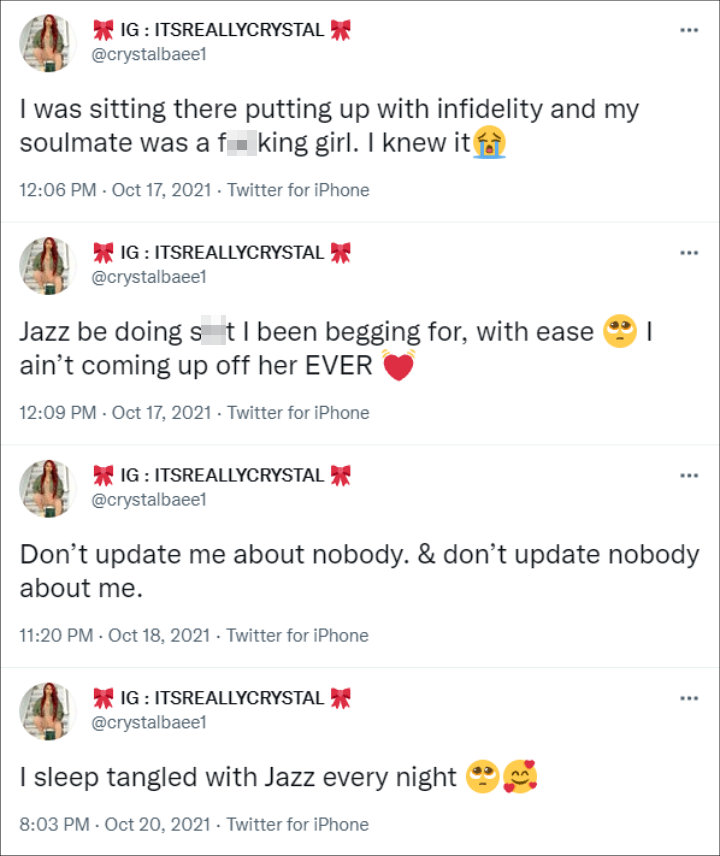 Crystal Blease appeared to call out her ex Polo G while revealing she’s dating a woman.

Polo and Crystal were first romantically linked in early 2018. They welcomed their first child together, a son, on July 6, 2019. It’s unknown when the two called it quits, but several months ago, Crystal was accused of cheating on the “Rapstar” hitmaker, which she has denied.

“Stop saying ‘I cheated’ anybody I ever dealt with was when I was SINGLE. I can do wtf I want when I’m single. I never cheated on anybody I been letting y’all a** talk but be fr why would I ‘cheat’ on the person I WAS in love with,” she wrote at the time, adding, “On my son I was riding until the wheels fell off any mf could tell you that I had to realize who tf I was! Y’all been coming hard asf over something y’all know NOTHING about. Now leave me alone.”