Are you ready to head back to Litchfield, Orange Is The New Black fans? There’s only one month left until Season 6 of the prison drama/comedy (it depends what season, y’know?) hits Netflix, and excitement is at an all-time high. There’s been a lot of action in the last five seasons, so after all this time, you may be wondering: Why is Piper in jail on Orange Is The New Black? It feels like it’s been ages since Piper (Taylor Schilling) was first sent to Litchfield, so it’s time to refresh your memory on her life in prison before Season 6 premieres.

Way back in Season 1, fans learned that before Piper started her artisanal soap business and shacked up with Larry (I know, this seems like a lifetime ago), she dated a criminal mastermind named Alex Vause (Laura Prepon). OK, Alex wasn’t exactly a criminal mastermind, but she was a professional drug smuggler who traveled around the world selling drugs for a major cartel. While they dated, Piper often traveled with Alex, and one time, Piper agreed to carry $50,000 to Belgium, implicating her as a drug trafficker. Piper’s guilt caused a rift in their relationship, and ultimately, Piper ended things — but it wasn’t long before Alex got her revenge.

After years of drug trafficking, Alex was finally caught, and she told the authorities that Piper was her accomplice in order to get less time on her sentence. As a result, Piper was charged with criminal conspiracy and money laundering and was sentenced to 15 months in Litchfield (she likely had a few more months added on after committing perjury in Season 2, but the show hasn’t said exactly how many).

In the months since she’s arrived in Litchfield, Piper has had a pretty dramatic life. When she arrived in prison in Season 1, Piper was engaged to Larry, but their relationship quickly fell apart when she reunited with Alex in prison. Alex and Piper have been in an on-again, off-again relationship since they first slept together in Season 1, but now, the two finally seem happy together.

In the Season 5 finale, Piper realizes that she wants to be with Alex forever, and she proposes. It’s an incredibly sweet moment, but it’s punctuated by drama: Alex, Piper, and some of the other inmates have been hiding in an underground bunker, and it’s only a matter of time before the riot officers — who have been told to use "deadly force if necessary" — find them. 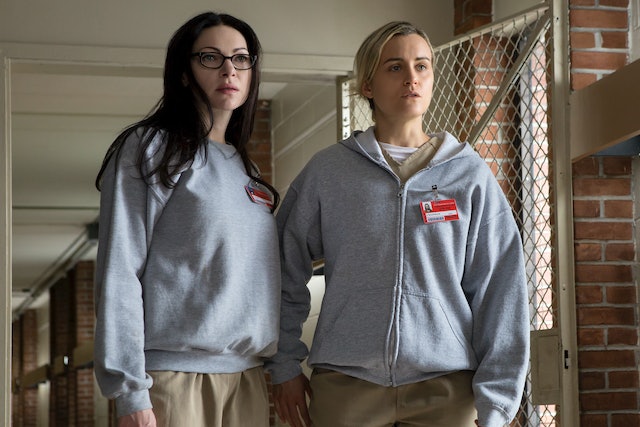 Piper’s relationship with Alex has been her main plot line on the show, but it’s not the only thing she’s been involved with since she arrived in Litchfield. In Season 1, Piper gets into a violent feud with Pennsatucky, which results in her being sent to the SHU, and in Season 3, she runs an underground panty business and becomes frenemies with Stella (Ruby Rose). Later, in Season 4, she inadvertently starts a White Power group in the prison, which ends disastrously and prompts her to lay low during the prison riot at the beginning of Season 5. But this is Piper we’re talking about, so it’s not long before she’s helping Taystee organize the riot and demanding supplies from the prison’s administration.

According to creator Jenji Kohan, Piper has about eight months left on her sentence, which should give the show more than enough time to wrap up her story line. But moving forward, the biggest question I have is not how much time Piper has left in prison, but what she’ll do after she’s released. Will she and Alex stay together? Will she go back to making artisanal soaps? Will she ever become friends with Polly again?

Hey OITNB fans, can we get a petition for a spin-off series started?