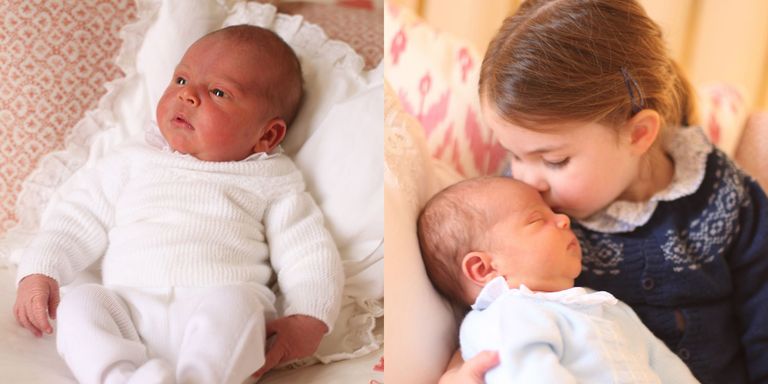 New photos of Prince Louis have arrived! Prince William and Kate Middleton have shared new portraits of the new royal, who was born on April 23, on social media today, and he looks even cuter than ever.

The first pic was taken on April 26, three days after the little one arrived. After remaining fast asleep during his first photo op, Louis was wide awake for his first-ever portrait taken by his mom, the Duchess of Cambridge. The new mother of three, an avid photographer, has been capturing the official birthday portraits of Prince George and Princess Charlotte for the past few years.

The second image was taken a few days later, on May 2, during Princess Charlotte’s third birthday. In the shot, she gives her new baby brother a sweet kiss on the forehead. She’s nailing her big sister duties already.

We're delighted to share the first photo of Prince George with his little sister Princess Charlotte. #WelcomeToTheFamily This photograph is the first of four official photographs being released today, taken by The Duchess of Cambridge in mid-May.

The Duke and Duchess of Cambridge didn’t release a portrait for Charlotte’s birthday this year, but this sibling photo may make up for that. It’s understandable why the royal parents might not want to overshare photos of the royal tots.

“William and Kate won’t want to overexpose their children. They have never been entirely conventional so I imagine they might release a photo in their own time,” royal expert Penny Junor told Elle UK.

It may be a while before royal fans get even more photos of Prince Louis, since he won’t be at Prince Harry and Meghan Markle’s wedding on May 19. We can’t wait to see him pose with both his siblings for the first time.