In the wake of Donald Trump, global warming, and systemic racism, Miley Cyrus is amazed that people thought her ‘shaking her a— while dressed as a teddy bear’ was worth getting ‘riled up’ over.

“I did a lot of this knowing I was going to rile people up,” Miley Cyrus said during the Behind Miley’s Plastic Hearts video for Apple Music. Miley, 28, gave a little insight into the music on her new album, Plastic Hearts, including the song “Golden G String.” The former Hannah Montana star said the track is “about my relationship with my persona and the perception of me. But then, it’s saying, ‘okay, so you judge me for wearing a golden g string, but like, these are the real issues that we need to be putting our frustration and our anger towards. Not just someone who likes to shake their ass [while] dressed up as a teddy bear, which seems pretty innocent, after the years that we’ve had.”

“Now, everyone’s like, ‘if that could just be the biggest problem we have in this country now. Miley Cyrus just won’t stop shaking her ass,’” she added. The world has indeed changed since Miley while wearing a flesh-colored two-piece, twerked against Robin Thicke during a performance of “Blurred Lines” at the 2013 MTV Video Music Awards. Donald Trump was elected president. The country has become more divisive. Climate change has resulted in more wildfires – including the one that burned down Miley’s home in 2018. A 21-year-old woman shaking her butt in public doesn’t seem that big of a deal anymore. 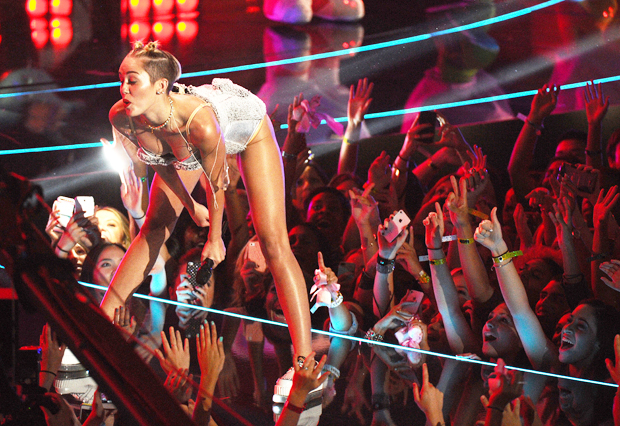 “We wrote [“Golden G String”], it probably was in 2017, 2018, something like that. And probably… This, again, is reflective of Donald Trump as president,” Miley told Zane Lowe in a November interview on Apple Music, “And the men hold all the cards and they ain’t playing gin, and they determine your fate. This song, which is also about kind of the cross I’ve had to bear, in a way, of saying, ‘I feel like everything that I’ve done has just been up for all the opinions, and I guess people being offended and all this sh-t.’ But it’s like our president grabs women by the… and you’re mad at me.”

“I’m a pop star,” Miley added in the Zane Lowe chat. “I’m supposed to do these things. I’m supposed to do things that sometimes make you uncomfortable, or you take offense. That’s kind of my job, that’s entertainment. I don’t want that in a leader. I consider myself a leader, but I would say that actually is creating the country that we’re going to live in.” 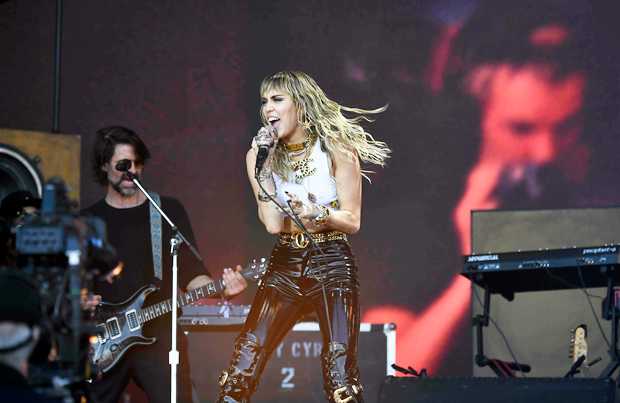 The world isn’t the only thing that’s changed. Miley has grown since her twerking days. She’s kicked drugs and alcohol out of fear of joining the “27” club. She’s reconciled with, married, and divorced Liam Hemsworth. She’s done a lot of growing up, according to a Nov. 5 interview with the Scandinavian talk show, Skavlan. “I’ve gone through a lot of trauma and loss in the last couple of years,” she said. “In a way, I didn’t spend too much time crying over it, and it wasn’t because I was cold or trying to avoid feeling something, but it was just because I wasn’t going to change it. I tried to just continue to be active in what I can control, otherwise you just start feeling like you’re trapped.”