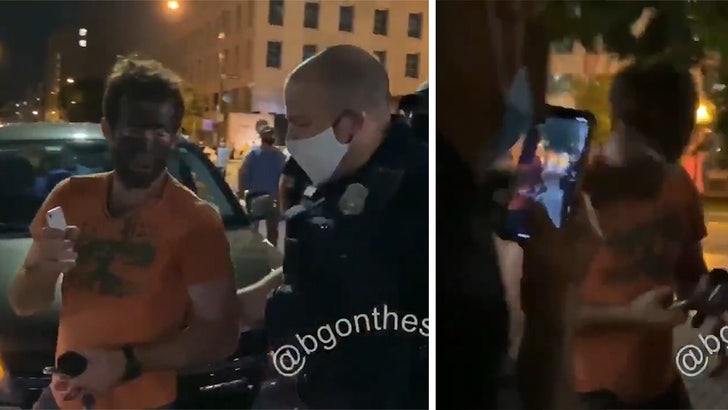 12:42 PM PT — The man in blackface has been identified by cops as Michael David Pion from Annandale, VA. According to a police report … Pion was allegedly punched in the head and face by the first suspect. Cops say they identified the man but did not name him in the police report. He was released, but we’re told cops are now seeking an arrest warrant.

Cops say 2 other suspects — Mahadi Lawal and Jonathan Gartrelle — were also busted for their alleged involvement. Lawal was arrested for simple assault for allegedly striking Pion in the face with his fist … and when cops tried to break that up, cops allege Gartrelle pulled an officer to the ground and then tried to resist arrest by laying on his stomach and locking his arms under his body. Gartrelle was arrested for assault on a police officer.

A white man wearing blackface pissed off protesters in D.C. and got sucker-punched as cops were leading him away … which sparked a wild police chase on foot.

However, one guy in blackface stood out like a sore thumb, angering some of the protesters who shouted he was racist and loudly encouraged him to get the hell outta Dodge.

As a few cops were intervening, a man recording the incident shouts “Blackface!” as another man came from behind and punched the guy in blackface.

The officers took off running after the attacker, and caught him on the street after a short pursuit — but it was a crazy scene as they tried to nab him.

It’s unclear if he was arrested, or what happened to the white guy in blackface. We’ve reached out to law enforcement.