Meet Maya Wiley, the civil rights lawyer, racial justice advocate and mom, who is running to be the next mayor of the country’s largest metropolis; New York City.

Maya Wiley is very clear about what motivated her to run for Mayor of New York City — her youngest daughter, Kai, now 17, who wants to be an artist.

“She did the math”, Wiley says, explaining that her daughter realized she’d have to support her artistic endeavors with a minimum wage job such as a cashier. “She said, ‘I could only afford $600 a month in rent.’ And she got all teary. And she said ‘mom, where can I live? Because I don’t think it’s here’”, in New York City.

Wiley, 57, realized after listening to Kai that even before the COVID-19 pandemic NYC was suffering from a crisis of affordability. “I feel like I’m running for my daughters, because I want them… this is their home. They don’t want to live anywhere else. This is where they were born and raised… they love so many things about New York that I think we all do. And the fact that they’re wondering if they can stay, it’s just wrong. But that’s true for so many of our kids.”

Finding concrete solutions to what is “wrong” in American life has actually been the theme of Wiley’s professional life, and in fact her upbringing. She grew up in Washington D.C, where her father, George, was a civil rights activist and her mom, Wretha, was a progressive. She earned a law degree and focused on civil rights, working for the NAACP and the ACLU (American Civil Liberties Union), before serving as the current NYC mayor Bill de Blasio‘s first counsel.

Thanks to all these years of service, Wiley brings a depth of experience as an advocate for racial justice and of actually running New York City government, to her mayoral campaign. And it’s for these reasons that Wiley believes she has the essential qualifications and real life experience and empathy to lead a diverse and vibrant New York into the next stage of its life. She knows that she faces the challenges of a historic crisis after the Covid-19 epidemic, which has devastated the economy and the lives of working people in the city, and their neighborhoods.

“The thing that is most important in a historic crisis is a compassionate, unifying leader that understands how government works, but is also a change-maker. These are ingredients that are going to not just recover New York City, but help us re-imagine it in a way that strengthens us”, Wiley tells Hollywoodlife.com in an exclusive interview. “It’s having a pulse on the actual experience of all our people. And our people [in New York] are very diverse and live very different lives in some instances. But have a lot of the same challenges.” 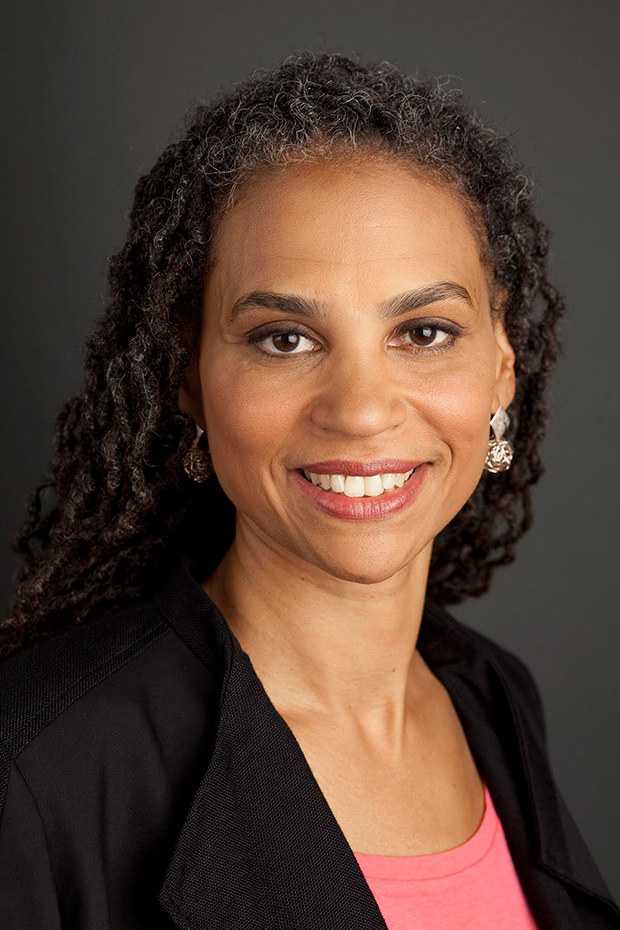 Speaking of challenges, Wiley has a large field of other NYC mayoral candidates — 12 Democrats and 2 Republicans — who she will compete against first in the Democratic primary election on June 23rd. While former presidential candidate Andrew Yang is leading the pack so far, Wiley is considered a top contender and 26% of NYC’s voters are still undecided, which is the biggest group, according to a Spectrum News NY1/lpsos poll.

Wiley is determined that her mission to lead the city is the right path for her at this particular moment in time. “Making society better, trying to make it more fair and more just, when you realize we have not changed things enough. And then you think about it — ‘what am I going to do about it?”, she says. She references her personal heroine, Shirley Chisolm, the first Black woman elected to Congress in 1968, who actually represented a district of New York City.

Truly, if there was ever a time that NYC needed “ideas”, it’s now as the city struggles to come back to life after COVID sent workers racing out of the city center and to work from home. New York City’s infamous office towers have been virtually empty for over a year and the exodus of workers has starved city restaurants and stores of all kinds. Empty storefronts line the business districts and residential neighborhoods.

And of course. on top of that, the normal hordes of tourists that flock to NYC and famously Times Square, have stayed away. Times Square has been almost deserted at times, with all Broadway theaters closed since the pandemic struck.

“This is a historic crisis, but New York always come back from crisis, including near bankruptcy in the 1970’s, including 9-11, including the Great Recession. New York comes back. The question is, how and for whom?”, Wiley points out. “And so really the task here is a tough job, but New Yorkers are amazing at unifying, to solve problems when called to it with a vision that says ‘we’ve got to invest in the things that solve the multiple pandemics (of Covid, of affordability, of structural racism and misogyny)’”.

So what are some of Wiley’s key ideas for how to fix NYC’s biggest and most pressing problems?

1) $5,000 grants for the neediest families that are struggling to make ends’ meet: “You stimulate the economy while you’re helping folks take care of their families.”

2) Create Community Care Centers: which will be drop off centers for childcare and elder care. “These create jobs in the care economy, and it gives people a safe place to take children and elderly parents, so people can go to job interviews or to see a doctor.”

3) $30 million in grants for small businesses to come back from Covid.

4) Cut the red tape and do a “fee and fine” holiday for a year or more, to help get small businesses back on their feet.

5) Keep NYC’s new “Opened Up Streets”: Wiley promises to keep allowing the city’s restaurants to take over the sidewalks and street parking spaces and to “spill out onto the streets”. Ask any New Yorker, and they will no doubt rave that the explosion of outdoor dining is the only positive to come out of the pandemic.

6) “We’re going to create an office of ‘Public Space Management’ to work with communities to keep and develop open spaces in the city”. So, New Yorkers, Wiley plans to keep and create more “open spaces” throughout the city’s neighborhoods.

7) Create 100,000 new jobs to create opportunities, stimulate the economy and also cut down on crime. “Unemployment and hunger have been a driver of violence,” Wiley explains.

During the past year as parts of the city have become less populated, some women have been open about their fears of walking on some of the NYC streets – something they never worried about before. Wiley understands that fear. “You know, we got to get people able to be back out again. And that is both supporting our small businesses, our night life, making sure that vaccinations are really penetrating the city, so people feel safe being out for that reason”, she says. But she also acknowledges that New York has suffered from more gun violence and that mental health is an issue that must be tackled more effectively. She wants to get people who are homeless or mentally ill off the streets and into “housing with support services on-site, because it works.”

If Wiley is elected she will oversee a massive New York City army of 330,000 civil servants and 55 agencies. She plans to bring multiple agencies together to problem-solve, and will appoint a “New Deal New York” czar who will break through red tape to get new projects which will re-invigorate the city through the pipeline. “We need senior management that directly reports to the mayor to unclog those pipes… I’m going to have a plumber”. 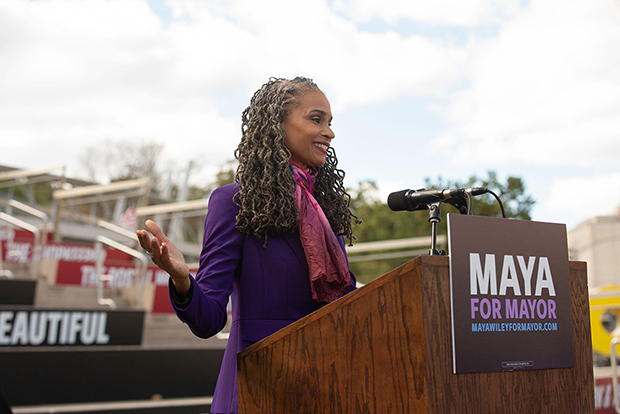 As for the avalanche of voter suppression laws that Republicans are introducing and passing in over 40 states, Wiley is clear that those efforts will impact New Yorkers even if these laws aren’t implemented here. “It impacts all of us, because what happens in D.C impacts all of us. And we in New York are not immune from a failed Washington,” says Wiley, who has been a frequent commentator on MSNBC as a legal analyst.

“New York City sends a lot of money to Washington in the form of taxes. We’ve got some of the most powerful members of Congress as representatives from New York City… including Chuck Schumer, who is Senate Majority Leader. This is a powerful, powerful moment for New Yorkers, but we only leverage it when the country is working and we have a truly representative government in Washington.” She urges anyone who objects to voter suppression laws to invest in Black not-for-profit organizations fighting suppression “because they are at ground zero of why voter suppression is happening.”

Now, how have her “fierce and fabulous” daughters reacted to her running for mayor? “If my children were younger, I probably wouldn’t have run, because I would have been concerned about the impact of an election on them,” she admits. “Because, it can be tough and mean. And particularly for women… I think we saw what Kamala Harris went through and how people attacked her personally in ugly ways.”

Wiley reveals that she had a very honest talk with her family (her partner of 20 years is investment fund manager Harlan Mandel) about what her mayoral race would mean for them. “In essence my daughters had veto power. They had the ability to say, ‘no, mom, please don’t do that.’” She vows that she will protect her daughters’ private lives – you’ll never see them in her ads for mayor. “I want them to be able to live their lives as much as they can on their own terms”.

It’s not surprising that with the kind of mother they have as a role model, Wiley’s daughters were “completely supportive”. “I’m just really humbled and proud of them.”

No matter what the outcome of New York City’s mayoral race, which is on November 2, there’s no doubt they in turn, will be very proud of her as she strives in the most meaningful way to make New York City great again for all New Yorkers.