Madison LeCroy’s name has hardly been out of the gossip columns in 2021 — and now she’s giving everyone something new to talk about. As fans will probably already know, the “Southern Charm” star hit the headlines in a major way in January after rumors began to swirl she was supposedly romantically involved with Alex Rodriguez while he was still engaged to Jennifer Lopez.

After the rumors refused to die down, LeCroy alleged in February that she’d had at least one video call with Rodriguez, but claimed they’d never actually met. “He’s never physically cheated on his fiancée with me. I don’t want anything bad for his family, or for mine,” she told Page Six. “We are definitely innocent in this.”

Rodriguez and Lopez then split in April, confirming the news in a statement to Today. “We have realized we are better as friends and look forward to remaining so,” they said, noting they “wish the best for each other and one another’s children.” Rodriguez denied an affair with the reality star.

LeCroy hinted at a new romance that same month after a fan brought up the A-Rod hoopla in a comment on Instagram. “Mmmm ARod on his way girl get bags [packed] he coming for you,” they wrote, according to Comments By Bravo, to which she hit back, “I have a boyfriend!”

Well, it seems like she’s now ready to officially introduce him to the world. Read on for what we know about their social media debut.

Madison LeCroy is 'madhappy' with her new man 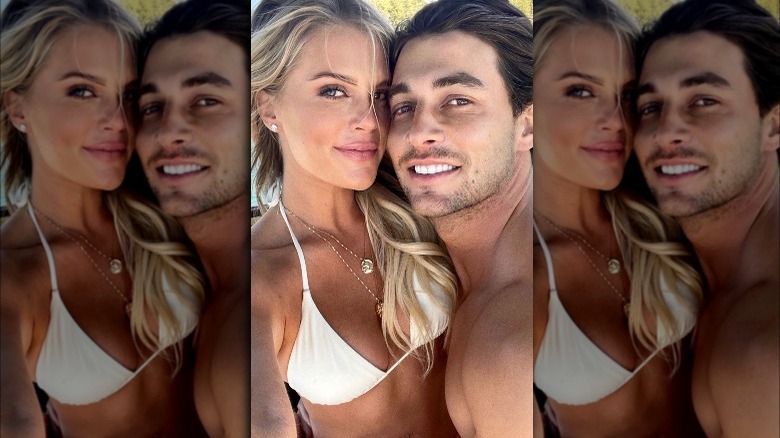 Madison LeCroy took to social media on June 13 to share a batch of photos with her new boyfriend. The star celebrated the summer sun with a series of posts to her Instagram Story, including a sweet selfie that showed her in a bikini as she cuddled up to her man, who was shirtless.

But she didn’t just save it all for where it would disappear 24 hours later. Oh no. LeCroy also made things officially official with a series of posts to her Instagram grid. The first in the photo set showed the two on a boat in matching striped attire as LeCroy put her arm around her boyfriend and the two flashed smiles with their heads together. In another, she showed off her bikini as her shirtless man put his hand on her thigh.

LeCroy — who previously dated her “Southern Charm” co-star, Craig Conover and was linked to Jay Cutler — also included a sepia toned photo of the two sharing a kiss as the boat sped around on the water. According to her geotag, the two spent some time together on Lake Tahoe, California, and she captioned the upload by telling fans she was “Madhappy.”

One thing LeCroy didn’t do though is tag her man in the snaps, so exactly who he is is still a little bit of a mystery. At least for now…