Warning: Spoilers ahead for “Westworld” Season 2.

Well, folks, we’re back in “Westworld.” And Stubbs is here to join us.

That’s right, after randomly disappearing following a run-in with some warrior hosts in the penultimate episode of Season 1, it appears handsome security officer Ashley Stubbs (Luke Hemsworth) was just enjoying a little sabbatical. But seriously, where was he?

We don’t learn much about Stubbs’ previous whereabouts when we catch up with him in Season 2, Episode 1, “Journey Into Night.” He, alongside the head of Delos operations Karl Strand (Gustaf Skarsgård) and fellow officers Antoine (Fares Fares) and Maling (Betty Gabriel), discover a beat-up Bernard (Jeffrey Wright) on the beach and soon go hunting for hostile androids, who have revolted against the human guests of the park. The four are still unaware of Bernard’s true identity ― he is a host modeled after the late Westworld co-creator Arnold Weber ― so they bring him along for the ride as they try to discover what exactly caused the robots to kill.

In order to understand more about Stubbs’ reappearance, Bernard’s storyline and the robot revolution, HuffPost called up Luke Hemsworth and asked him to break down the first episode of Season 2. And boy, did he giggle his way through some fun theories.

Stubbs is back. He shows up in the second scene of Season 2 as Bernard wakes up on the beach. But, where you been, man?

Stubbs just went on holiday ― just had a little rest down to the Bahamas, a little surfing trip. [Laughs] Look, it is explained where Stubbs goes and what happens, so I don’t want to give too much away, but it’s really cool. It was something I was really excited to do and it was a great experience to be a part of the park Stubbs goes to. I can’t say anything more than that because it does go into depth of what exactly happens.

We do get a sense that there are many different parks in Westworld, we just don’t know how many. We did, however, get a glimpse of a Bengal tiger from Park 6, which Stubbs discovers.

Well, we know Shogun World, that’s been revealed. And then, yes, Stubbs alludes to Park 6 and a Bengal tiger. The possibilities are kind of endless with, “Is Park 6 the end of it? Is there more than that?” [Long pause and laughter]

Yeah, it’s also hard for me because I’m trying to remember when exactly stuff is introduced with the multiple timelines. That’s another hurdle to jump in terms of remembering where everything is placed. But yeah, the possibilities are endless.

Yes, the multiple timelines are back, of course, and equally as confusing as the first season. As an actor on the show, I’m sure it gets a little tricky, too.

It does get a little tricky, that’s why you have incredible directors to help you remember exactly where you are and where you’re going. A part of the parcel, I guess, is getting to set knowing what’s happened before and what’s coming. But it does take a little while for it to sink in. You get the scripts and they’re incredibly dense and layered. I find myself going backwards and forwards a few times just to let it all sink in. Then, you let it all slide and enjoy watching the series so there’s some level of surprise for me, as well. The hardest part is talking about where those timelines fit in to what episode, because that’s when it all gets a little bit blurry. There is stuff that maybe gets jumbled around too in the editing process, which makes it extra-especially hard to remember when is what.

It does seem Stubbs will have a bit more to do this season.

He does. He gets to breathe and we see a different side of Stubbs. I wish I could say more about it, but it’s more fun to find out as you watch it. 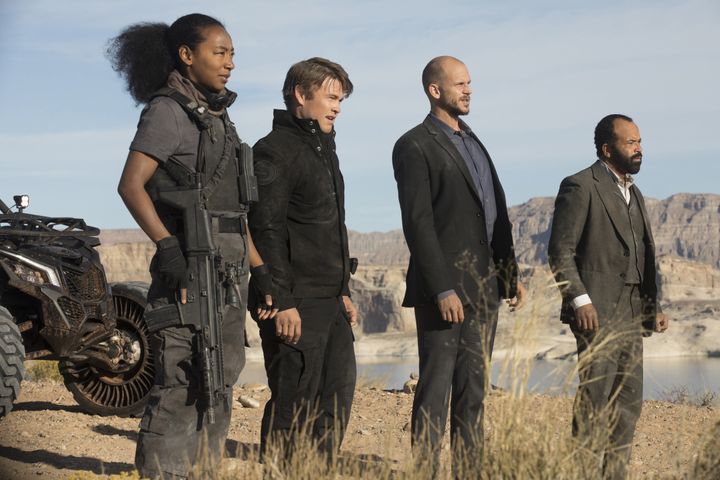 When we see Stubbs again, security is out there capturing and killing hosts. Little do they know, Bernard ― who they find on the shore ― is a robot himself. Stubbs has always been a Bernard supporter. Does he ever find out the truth?

Ummm, I don’t know. I think we explore all of that. The thing about Stubbs is he’s just a good guy. Regardless of whether it’s a host or a human, he’s pretty compassionate, I think. That unfolds and it’s something that has been unfolding for Series 1 and Series 2, that he’s just a guy who actually doesn’t like to see people suffer and he’s trying to figure out his place in the world and where he’s headed. Yeah, there’s a few things to tackle there.

Let’s talk about the brain capsules that seem to be residing in these hosts’ heads. What did you think about that reveal?

I can’t remember when it came up, but there was some discussion about what exactly their operating program was or how their inner systems function and what they look like. The fact that it was a pearl or some sort of spherical device which contained all their memory and coding and everything. But I remember being pretty grossed out by that scene. [Laughs]

Yeah, it was nasty.

It was really nasty. I think Fares had a pretty good time digging around in the brain and throwing pieces of goo and flinging it at everyone, so it was good. It’s interesting. I can’t remember where I read this, but this may be the way technology is heading, this kind of device.

Oh, lovely. Well, it appears Bernard may have damaged his brain when he shot himself last season. He’s losing it ― questioning the nature of his reality. Meanwhile, Dolores is very aware of her reality, and is on a killing spree. Were you surprised to see that switch in their characters?

I think the nature of progression is that we’re always learning and we should be questioning the nature of our reality. I don’t think any of the characters are ever satisfied with where they are ― they’re constantly trying to find a place where they fit and find the answers. When you get dropped a bombshell like Bernard did in terms of finding out you’re not human, what do you do? And I think that’s one of the show’s strong points is it asks the question, “Are you asking the right questions?” What questions do you ask? And where do you need to head? What do you need to accomplish to find those answers? We ask a lot more questions than we probably answer on this show, and the answers are probably a little darker than we’d really like.

Yes, it’s a show full of questions, and the one we are left with at the end of Episode 1 is huge. We see a sea of water that didn’t previously exist in the park, and in this water are many dead hosts. One of those hosts is Teddy. Then, Bernard says he killed them all. Whoa! What do you think happened?

You know the truth!

I know the truth, yeah.

Did the truth surprise you?

I don’t think there’s an episode that goes by that I’m not surprised and excited by. There’s so much depth. Once you start pulling back those layers of skin and bone and hair, so to speak, the rabbit hole is deep. I think in this season it gets deeper and deeper and deeper. I’m amazed.

I really am amazed at the direction the writers choose and the surprises. We’re constantly being surprised as actors as well, day in and day out. It’s hard to convey just how good of an experience that is, because it’s an experience like no other. We’re growing as actors and writers, all together. Each one of us informs the other. I know myself, I’m just trying to do my best in this amazing situation that I’m given. There are so many people behind the scenes who are putting far more hours in than we do, and they definitely make our job a lot easier. And I hope we sort of do the set decorators and the costume department and the rest of the crew a little bit of justice, and that their work is recognized as the brilliance that it is. I’m blown away by it.

There was a grueling six-month shoot for Season 2. But how does it feel to be on board a project that allows you to play a bit in terms of budget and scale?

I approach the work the same way. I try to go as deep as I can into what I need to do. The beauty is when you have all those sets that are real, in those incredible locations with real landscapes, 300 extras, a lot of your work is done for you. You can focus on the specifics and the moment and the beat, and block all of the other craziness that is happening in the world outside. From an actor’s point of view, it feels the same, the process is the same, it’s just a lot bigger. But I think it still has to be truthful, it has to be real. There has to be meaning to it. With the material as good as it is, then it’s a no-brainer.

Do you at least rub this in your brothers’ faces, that you’re on one of TV’s biggest shows? I mean, we now have “Thor” vs. “Hunger Games” vs. “Westworld.”

I don’t think any of us rub it in each other’s faces. We’re all very supportive, and I think that part of our lives is something we all share with great enthusiasm with each other. I think every other part of our lives we will be competitive, and I’ll rub it in their faces but, no, I think to rub this in their faces would be to cheapen it and cheapen their work. They’re both doing an incredible job and I’m very proud of them.

Wow, you’re such a sweet big brother. I was expecting you to dig in there, and that was really touching.

So, you made it out of Westworld alive, so far. But did you and Matt Damon make it out of Asgard in “Thor: Ragnarok”?

[Laughs] Yeah! Of course we did. I think there’s room for an Actor Thor and an Actor Loki spinoff. That’s what I’m gunning for. I want to get on the phone with Kevin Feige and be like, “So, here’s my pitch: Actor Loki, Actor Thor save the planet. They don’t mean to, but you know. Maybe with a little bit of help from Thor and the others.” We need to weave these two legends into the story because they really are the every-men of Asgard.

Well Chris’ contract is up soon. He’ll be hanging up his Thor costume and moving on. Now’s your time to step in.

[Laughs] I think Actor Thor needs his own spinoff. I’d like to see him maybe head off in his own spaceship with a little merry band of Shakespearean travelers, putting on shows across the universe.