In Marvel’s Loki series, Time Variance Authority (TVA) agents are often seen carrying glowing batons and are ordered to “prune” someone. Whoever is unfortunate enough to get poked with the end of the stick is then burned up like a paper thrown into a flame. The gruesome punishment appears to result in instantaneous death. But after the fourth episode, it appears that “pruning” may not be what it initially appeared.

After releasing Loki (Tom Hiddleston) from a memory prison with Thor’s Sif (Jaimie Alexander), Mobius (Owen Wilson) gets pruned by his friend, Judge Ravonna Renslayer (Gugu Mbatha-Raw). And in a shocking final scene, Renslayer prunes Loki in front of our Lady Loki, a.k.a. Sylvie (Sophia di Martino). But Marvel would never kill off its title character, right?

In a mid-credits scene, Loki faceplants on the ground and wonders if he’s in hell. Fortunately, four new versions of Loki are there to dust him off. DeObia Oparei stars as a Loki who looks more like Thor (and is equipped with his own hammer) than the main MCU character we know. Jack Veal is a kid version of Loki, who is inexplicably holding an alligator (or is it a crocodile?), with Loki horns of its own (this Alligator/crocodile is, yes, likely its own Loki). Finally, Academy Award nominee Richard E. Grant is an older version of Loki, wearing a costume closely aligned with the character’s actual comic look. 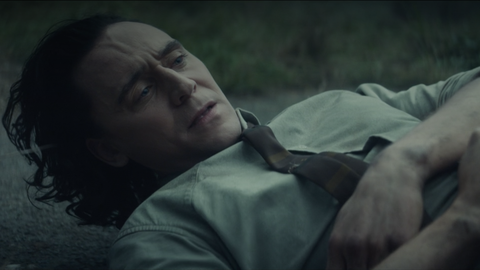 Loki’s awakening in a new location completely changes the definition of what “pruning” means. Instead of instant death, the hot poker could have always been a teleportation device to another timeline or at least a location that doesn’t impact the sacred timeline. All these Lokis could be living in a world full of other pruned variants, plus Mobius.

It’s also possible the batons are usually meant to kill people, but they’ve been tampered with. By the end of the fourth episode, Loki gains two allies in Mobius and Hunter B-15 (Wunmi Mosaku). Either of them could have fiddled with the batons and switched it from “Eviscerate” to “Teleport.” If that’s even possible. Or there could be another person pulling the strings and saving the various versions of Loki for a greater purpose. Our Loki’s death could have been prevented through actions we have yet to see.

Is pruning in the Marvel Comics?

Pruning doesn’t seem to be in the comics. The closest weapon in the Time Variance Authority’s arsenal is the Retroactive Cannon, which first appeared in 2006’s She-Hulk (Volume 2) #3. The cannon shoots anti-temporal rays, which erases someone from all reality. Such a powerful device may not appear in Loki. Still, there’s no telling what the Time Variance Authority or the Time Keepers have up their sleeves for the last episodes of Loki. Tune in next week to see how Loki and his four new pals (of course all of his friends are…himself) fair in the series’ penultimate episode.