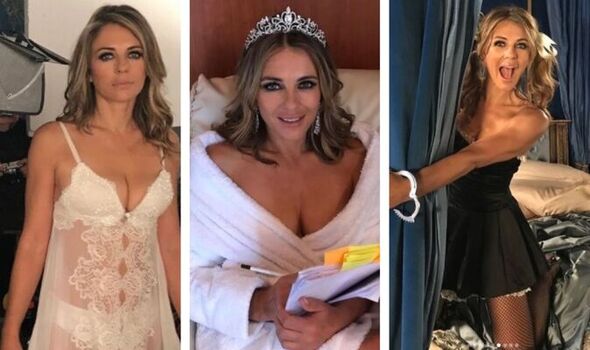 Liz Hurley on the set of The Royals

The 56-year-old flaunted her age-defying looks to over 2.3 million followers in a series of snaps featuring her in a dazzling tiara behind the scenes of the show.

“The Royals has dropped on @netflix All four seasons,” she wrote in celebration.

“Such happy memories of making such a fun, silly show about a fictitious British Royal Family!”

The actress treated her followers to footage of herself on-set in nothing more than smoky eyeliner and a sheer white lace embroidered dress.

While camera equipment could be seen in the background, Liz posed for her own more personal and intimate pictures behind the scenes.

Other snaps include a pouting Liz beside Joan Collins, while wearing a glittering silver dress.

Despite looking sensational in the lace dress – and, in another snap, a black thong lingerie set – Liz has previously admitted she has no interest in extreme diets.

Other photos she uploaded to her post included one of herself on-set with her 19-year-old son Damian, who had a cameo role in the show.

Meanwhile in another, she donned a waist-hugging strapless black dress, paired with sexy fishnet tights, proving that the fictional Queen Helena is sizzling when not at the throne.

The snaps give a preview of what kind of visuals fans can expect when they tune into the Netflix show.

Liz Hurley gave fans a sneak peak of the visuals they can expect on The Royals, including scenes of her in this black thong lingerie set

Liz Hurley with her crew on The Royals

Liz Hurley posing as Queen Helena while the cameras roll

Liz Hurley ictured with teenage son Damian who, at 19, received a cameo role in The Royals