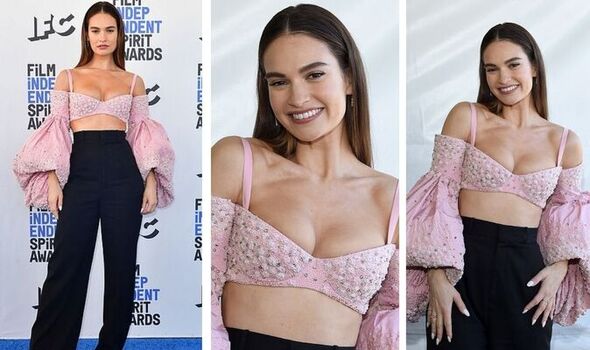 Pam and Tommy star Lily James got back to glamorous business as usual by posing on The Film Independent Spirit Awards’ red carpet in a baby pink bralet, embellished with puff sleeves and tiny sparkly jewels.

She kept the bottom half of her outfit comparatively simple but just as chic, pairing the off-the-shoulder number with a pair of high-waisted black trousers.

The 32-year-old actress also accessorised her busty outfit with a pair of diamond-encrusted drop earrings to add extra sparkle to the occasion.

Lily started her TV career in the Just William series 12 years ago, followed by stints in Downton Abbey and War In Peace, but her breakthrough role was when she landed the starring title role in 2015 as Cinderella.

Last night, however, Lily looked worlds away from the moment she donned Cinderella’s fairytale baby blue gown at the awards – and she showcased her figure to maximum effect.

The ceremony is designed to celebrate the legacy of independent film-makers and this year marked its 37th anniversary.

The website promises: “Each year, the Spirit Awards brings together top talent from throughout the world of film and television”, and, with the help of Lily, 2022 proved to be no exception.

Lily James takes to the stage

Lily James spoke on the stage at the glitzy awards bash

Lily James in a full-length shot

Lily James channelled Pamela Anderson in her iconic Baywatch swimming costume in Pam and Tommy (right), while the real Pamela can be seen on the left