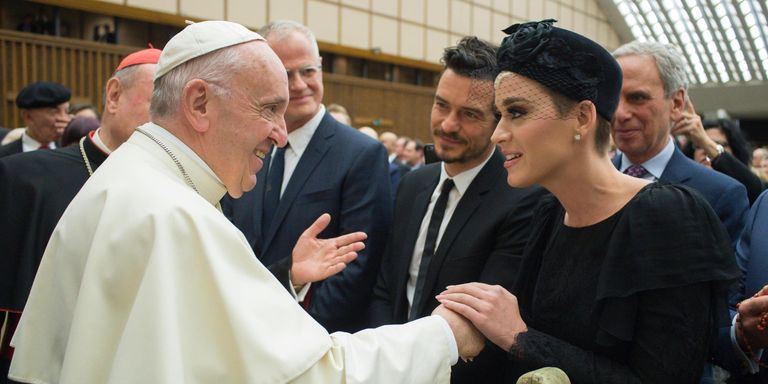 Today in unusual dates, Orlando Bloom and Katy Perry have been spotted meeting the Pope.

Bloom and Perry were attending the “United to Cure” Conference, at which Perry was one of the speakers (via E!).

And in one of her Instagram Stories, Perry explained that she was at The Vatican to give a talk on meditation, accompanied by her mom, her manager, and her “darling” Orlando Bloom. Having called him her “darling,” it’s pretty safe to say that Bloom and Perry are still going strong:

Perry looked completely elated to be meeting Pope Francis, and couldn’t wait for the introduction:

And she seemed to be enjoying life at The Vatican, too:

#VIDEO | “Never not being me ??‍♀️” from @katyperry’s Instagram story pic.twitter.com/SLkXum5gEc

Reports that Bloom and Perry had rekindled their relationship began circulating at the start of 2018. A source told The Sun in Feb. 2018:

They were also spotted vacationing in the Maldives together in Jan. 2018, at the luxury resort Amilla Fushi. Then the following month they were seen together in Prague, where Bloom has been shooting new show Carnival Row, alongside Cara Delevingne (via Us Weekly).

In March 2018, Perry wore a onesie covered with pictures of Orlando Bloom’s face, which seemed to be a pretty clear sign that the relationship was back on. And their recent trip to Vatican City seems to suggest that they’re very much an item.

From: Harper's BAZAAR US