Johanna Leia was treated to a date like no other by Drake. Here’s everything to know about Johanna, including her reality TV past and prior outing with the rapper.

If that romantic dinner date at Dodgers Stadium is any indication, then Johanna Leia is about to live the good life with Drake. Johanna, 40, and Drake, 34, sparked dating rumors on July 8 after the “God’s Plan” rapper rented out Dodgers Stadium and set up a sweet date night for the pair. Helicopter photos captured the apparent lovebirds enjoying dinner and drinks at a table on the baseball field while looking as happy as can be.

But who is Johanna? And what’s her connection to Drake? Here’s everything you need to know about the 40-year-old bombshell that has seemingly stolen Drake’s heart. 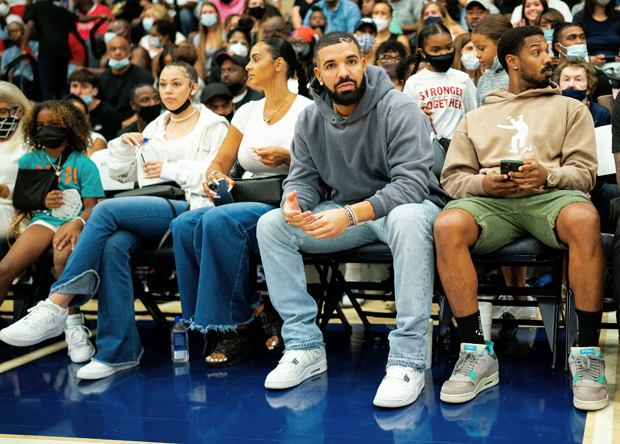 Johanna Leia Is A Model.

Johanna is an obvious natural beauty, so it’s really no surprise she’s dabbled in modeling. She was previously employed by Ford and Wilhelmina Models, according to Sports Keeda, and is often posting modeling shots to her Instagram account, which has over 220,000 followers. Johanna tends to model all different outfits, from sexy bathing suits to casual jeans and tops. She also uses her social media following to promote other products and business, such as Skylar, a fragrance brand, and FashionNova.

Johanna is a proud mom to two children: son Amari Bailey, 17, and daughter Savvy, 7. She shares both her kids with ex Aaron Bailey, who was a wide receiver for the Indianapolis Colts from 1994 to 1998. It is unknown if Johanna and Aaron were ever married.

Amari, like his father, is an athlete: the teen is one of the star players of the Sierra Canyon High School basketball team, which LeBron James‘ son Bronny James, 16, also plays for. Amari is a shooting guard and helped USA Basketball win a gold medal at the 2019 FIBA Americas U16 Championship, according to his bio. Amari is a rising senior and has already committed to UCLA, ESPN reported.

Johanna had a brief stint on reality television a few years back. She appeared on the first (and only) season of the 2017 Lifetime reality series Bringing Up Ballers, which explored the lives of five Chicago-based female entrepreneurs who have children that are young basketball players. The show followed these moms as they balanced their businesses while also fighting to ensure their son reaches the NBA, according to IMDb. The show aired for only six episodes before it was axed by Lifetime.

Johanna Leia Has Been Out With Drake Before.

Johanna’s date night at Dodgers Stadium with Drake was not the first time the model and rapper enjoyed each other’s company. In June, Johanna sat with Drake and Michael B. Jordan at a Sierra Canyon game to watch Amari. In a video shared by the Bleacher Report, the trio can all be seen standing together and loudly cheering for the team.

Johanna and Drake’s basketball outing may be related to the origins of their relationship. Given the fact that Drake is close pals with LeBron, whose son is on the same team as Johanna’s, it’s possible that the couple met at a game that Drake had attended. That’s merely speculation, but hey, totally possible. Either way, this looks like a romance that’s just starting to get heated up.