Jeremy Roloff had some exciting news to share with his fans. As those who watch “Little People, Big World” know, Jeremy has grown up before our eyes on the series, which began in 2006, per IMDb. He and his wife Audrey Roloff appeared on a few seasons of the series together prior to leaving and pursuing other endeavors.

“After 14 years, over 300 episodes, and 17 seasons, the time has come. A year ago I made the decision that this season would be our last. It has been an amazing run, and I can’t say thank you enough to all of you who have watched and supported us along the ride,” he wrote on Instagram in July 2018. “We have the most loyal fans on TV, and we appreciate every one of you. You are what made doing this so fun,” he continued. “We will still be supporting the family as they carry the #LPBW torch onward. This is a decision concerning Audrey and me specifically – the show must go on!”

Jeremy shared that the pair were not “disappearing,” but instead, had some other things in the works. He ended the post by thanking his fans for their love and support over the years and naming some of the places he has met fans. Despite the pair leaving the TLC hit (which has made them a lot of money), fans have kept up with Auj and Jer on Instagram to see what they are up to. Keep scrolling to find out what’s next for the pair.

Jeremy and Audrey Roloff are expanding their brood 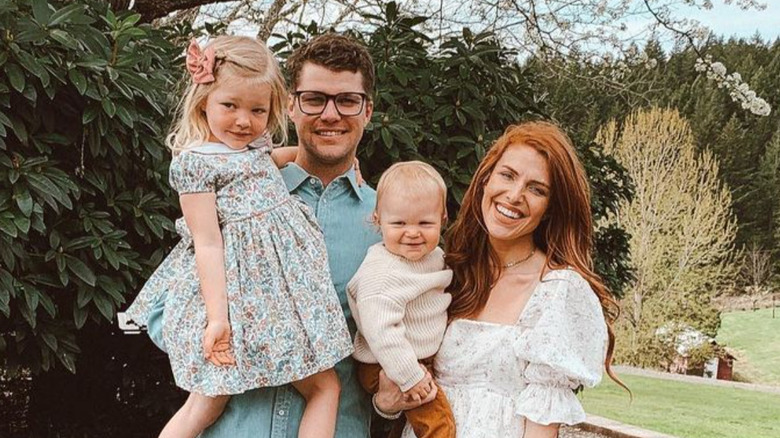 Baby makes five for Jeremy Roloff and his wife, Audrey! The former reality star took to his Instagram feed over the Fourth of July weekend to share a short and sweet clip that announced some really good news. The video was accompanied by Ben Rector’s song, “Kids,” which proved perfect for the occasion. It started with Jeremy tossing his daughter Ember in the air before it switched to son Bode (looked like some TikTok editing to us). Next, he caught a reel of black and white ultrasound photos before the whole gang gathered together, and Ember proudly announced that her mom is expecting. They also had a blackboard with white letters that read: “Tie-breaker coming in November.”

To go with the adorable video post, Jeremy shared a funny caption. “Our family’s growing! Maybe I can convince Audrey to get a minivan now?” he asked alongside a crying-face emoji. Fans have loved the sweet update, and many flocked to the comments section to wish the famous duo the best as they continue expanding their family. “Oh my goodness, CONGRATULATIONS,” one fan gushed. “Such wonderful news!!!!! Awe, so happy for all of you.” “Congrats Family of 4..Chrysler Pacifica is the best decision Husband made for our family,” a second wrote, referencing the caption. Even Matt Roloff took time to comment on the post. “Haahaaa. Love this video. Love the news!!!” he raved.

We cannot wait until November so we can see what the official tie-breaker will be.