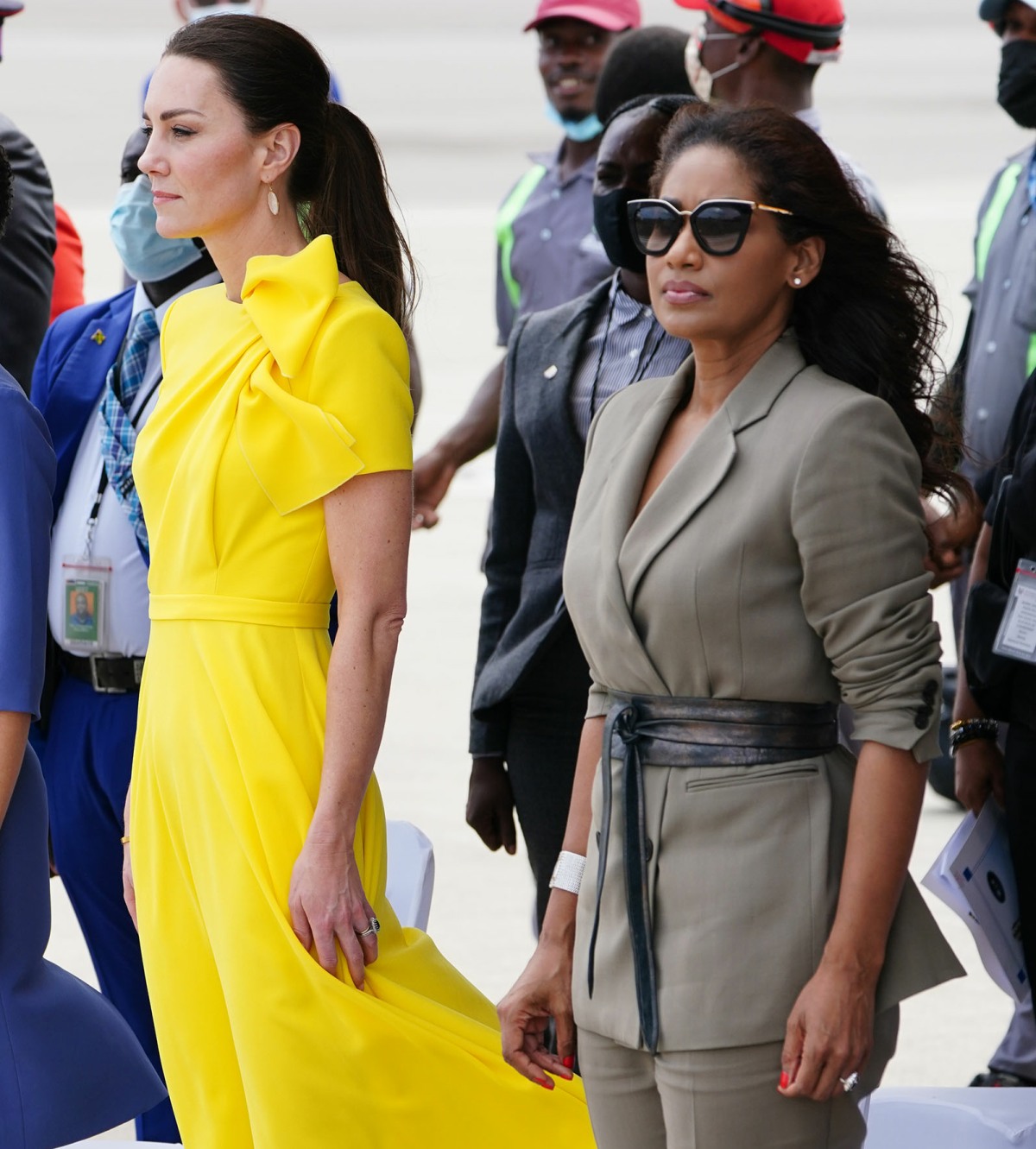 Lisa Hanna is a Jamaican MP, UN Development Programme goodwill ambassador and former beauty queen. She’s beautiful and badass and she cares a lot about Jamaica and her community. MP Hanna was the gorgeous woman in a grey/olive-colored pantsuit at the Duke and Duchess of Cambridge’s arrival in Jamaica. Lisa Hanna was part of the welcoming ceremony, seated to Kate’s left side. A short clip went viral of Hanna’s interaction with Kate, where it looked like Kate turned to Hanna and said something and Hanna turned her face away. Kate’s face falls and she looks away too. I included the lil’ video in previous coverage, but here’s another version of it.

Hanna was largely applauded by… you know, most of us. But of course the Daily Mail and other British tabloids began attacking her for “snubbing” Kate. Well, MP Hanna is using her newfound global stardom to correct the record and call William and Kate to account. From her Guardian guest column:

She’s fine with Kate: Much fuss has been made of my supposed snub of the Duchess of Cambridge because of a two-second manipulated clip taken out of context. I have nothing but respect for Catherine as a person, and I treated her with that respect and cordiality, as evidenced by many other photos and videos of our interaction. I do not have any quarrel with the duchess herself, the people of the United Kingdom or the government.

Her problem is with the institutions: The more significant issue at play is the current global reality that our institutions have created over centuries. We all know the history of wars of conquest, slavery, subjugation and colonisation. We all know about the extraction of resources and the exploitation of lands and labour. Sadly, too many of us do not know that it was the slavemasters – not the slaves or their descendants – who received reparations after slavery ended and the plantations collapsed. We know many of these things; and we all know deep in our hearts that these things were, are and always will be wrong.

Reparations in the 21st century: We in the Caribbean Community (Caricom) are united across our myriad national, political, ethnic and regional differences in the belief that the issue of reparations must be taken seriously. We have studied the topic extensively, held conferences, and written white papers on the need for reparations and how to practically implement such a policy in the 21st-century. What we now need is for the west, especially the United Kingdom, to seriously engage with us on this matter. And, it’s not just lip service that we require. Flowery words and artful symbols not only do not placate us, but words without action will also offend us. We need leaders in civil society, in politics and in the monarchy to not only acknowledge historic exploitation and the consequences thereof but to begin to make concrete steps to rectify it.

She’s happy Jamaica is firing the British royals: I am heartened that Barbados and now Jamaica are taking steps towards becoming truly independent by removing the Queen as head of state and becoming republics. However, this is just a step, and we must not rest on our laurels. Our friends in the United Kingdom should be under no illusion that because these moves have been made, that the journey to justice is now complete. Far from it.

She hopes William & Kate will be more active on these issues: The evils of slavery cannot be forgotten. Nor can the wealth gained from it by a few – including the wealth gained by the institution of the monarchy – be forgotten. Indeed, the Duke and Duchess of Cambridge have a unique opportunity to define their own issues and advocacy. It is my hope that this Caribbean visit will stir their emotions and their thoughts, and that as they ascend they will refine the monarchy’s perspective with an eye toward building a fairer and more just global society.

Charles and William didn’t do enough: Condemning slavery with no action, as both Prince Charles and Prince William did, is not particularly bold, nor does it show courage. I would hope that this rhetoric is a start and not an end to their journey on the issue of reparations and justice. When we in Jamaica say respect, we mean it. We respect you. We respect Prince William and Catherine. We respect the British people. We respect your leaders. When you visit Jamaica, we are polite to you. We are cordial to you. We give you the time of your life on holiday. We laugh with you. We cry with you. All we ask is for reciprocity by taking our advocacy seriously, and that together we can right the historical wrongs and reset the political, economic and social system for future generations.

I read this all in Jamaican accent and it was glorious! She’s absolutely right and it’s so smart for her to use the now-global interest to parlay that into activism, words and deeds. She treated Kate and William with respect, but she still wanted them to be fired and for realistic reparations to be paid. 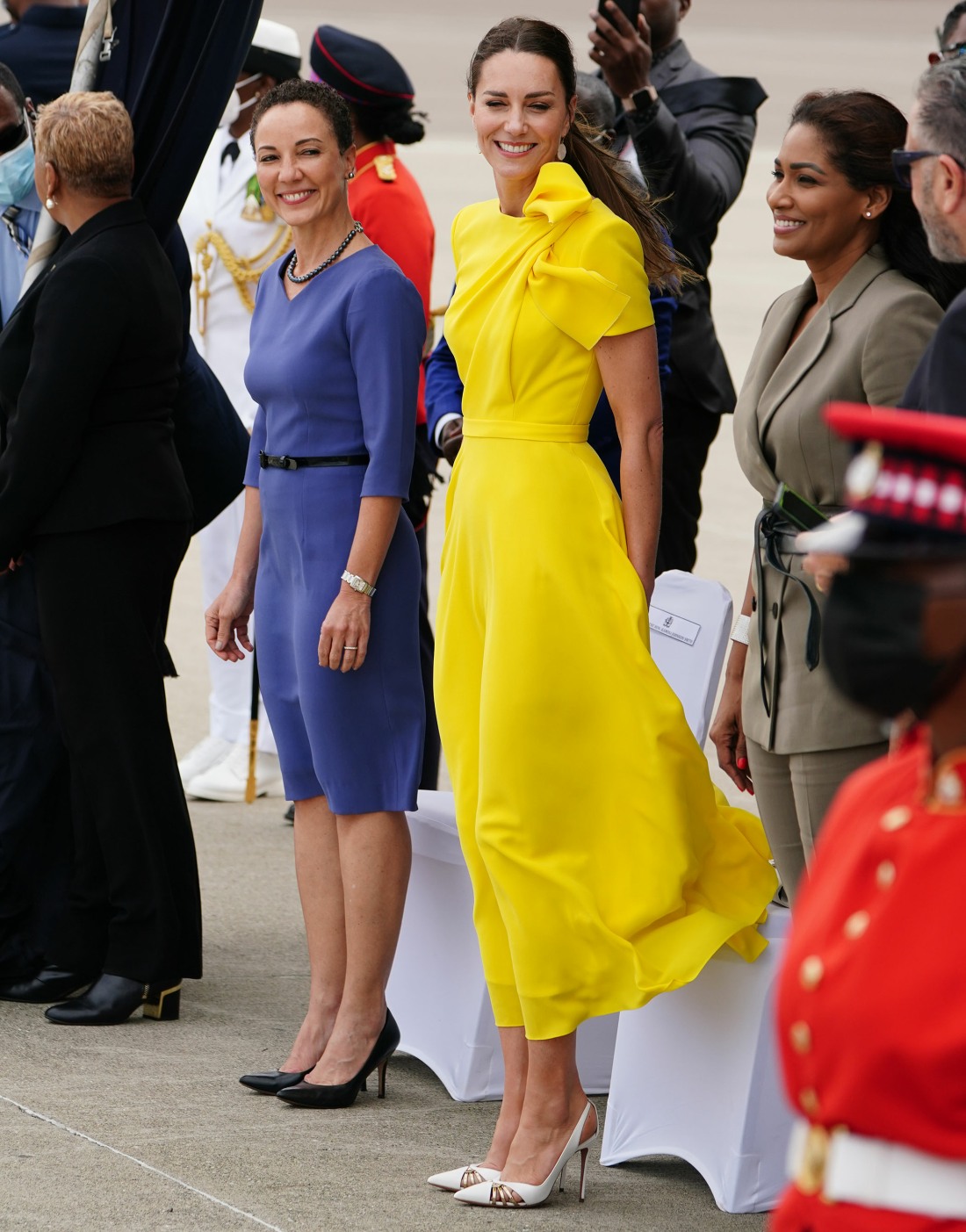