There was a lot of coverage on Donald Trump’s height, weight, and health during his presidency. In early 2019, the former POTUS underwent a full physical and the results were released to the public. “It is my determination that the President remains in very good health,” Trump’s physician, Dr. Sean Conley, said in a statement at the time, via (USA Today). A year earlier, eyebrows were raised as speculation grew around Trump’s height. A report on the then-president’s health was also released in 2018, and he was listed as standing 6-foot-3, per The Guardian. The reason this number stood out was that it listed Trump as one inch taller than his 2012 driver’s license which stated he was 6-foot-2. Online sleuths poured over old photos in an attempt to ascertain Trump’s true height. A photo of Trump standing next to 6-foot-3 baseball legend Alex Rodriguez – where Rodriguez looked noticeably taller than the former president — was cited as evidence that Trump was not as tall as he purported to be.

Regardless of his father’s true height, it was clear from a young age that Barron Trump would grow to be very tall. In 2018, at only 12 years old, he was already as tall as his dad, per Town & Country. The youngest Trump kid caused a stir online when a video showed him towering over Mike Pence at a Republican National Convention in 2020, per International Business Times.

So how tall is Trump’s youngest son? Short answer: very.

Barron Trump towers over his parents 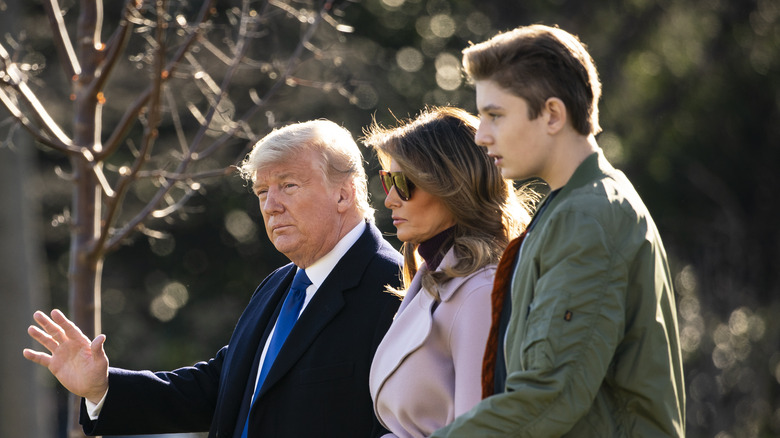 Barron Trump is mostly absent from the spotlight and was not photographed often during Donald Trump’s presidency. To commemorate her son turning 15-years-old, Melania Trump even opted for a photo of two black balloons in a March 20 Twitter post along with the caption, “Happy birthday BWT.” Many had not seen recent snaps of Barron, so the teenager’s staggering height surprised onlookers when photographs of him and his mom leaving Trump Tower were published on July 7 by the Daily Mail. The former model stands at 5-foot-11 and was sporting heels, but Barron was significantly taller than his mother. According to the outlet, he’s 6-foot-7. Wow.

Several Twitter users were shocked by the images, and some joked about the teenager’s chances of making the NBA. “Fast forward to 2025. Starting at center for the New York Knicks, Barron Trump,” one Twitter user wrote. “Barron Trump in the NBA was not the next Trump twist I was expecting,” another joked.

The youngest Trump appears to have beat out his older brother as the tallest in the family. In 2020, International Business Times reported Donald Trump Jr. as 6-foot-1 and Eric Trump was the tallest then at 6-foot-5. During a GOP event in June, Donald marveled at his teenage son’s growth. “Barron is 6-foot-7, can you believe it? And he’s 15,” he said. “Eric is short – he’s only 6-foot-6,” Trump joked to the crowd (via the New York Post).