The late Princess Diana — mother of Prince William and Prince Harry, as well as a beloved figure around the world — would have celebrated her 60th birthday on July 1, 2021. That’s why her sons chose that date to unveil a statue they had created for the mother that they adored so very much.

According to the BBC, the statue of Diana “was commissioned by the princes in 2017 to mark the 20th anniversary of their mother’s death and to ‘recognize her positive impact.'” The work of artist Ian Rank-Broadley, “whose portrait of the Queen appears on all UK coins,” the piece will be located in the Sunken Garden at Kensington Palace. The Daily Mail noted that the garden “was one of Princess Diana’s favorite spots for reflection.” In that light, it seems fitting that William and Harry explained that they hope the statue will help visitors “reflect on [Diana’s] life and her legacy,” adding, “Our mother touched so many lives.”

Although William and Harry’s relationship has been strained over the years, they were seemingly able to put their differences aside in order to create this touching tribute to their mother. Read on to find out how they did just that!

William and Harry made sure the Sunken Garden featured something special 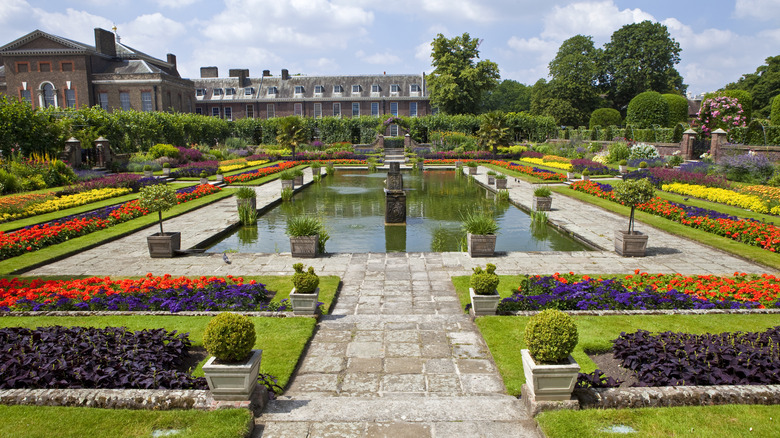 When visitors stop by Kensington Palace, they’ll find something very special if they spend time with the statue of the late Princess Diana in the Sunken Garden. The spot that meant so much to the royal is now filled with more than 4,000 flowers. The surely stunning layout features “50 varieties, including 100 of Diana’s favorite Forget-me-nots, 300 tulips, and more than 500 lavenders,” according to the Daily Mail. Beyond that, there are also “more than 200 roses, 100 dahlias, and 50 sweet peas.”

The overall arrangement of the floral masterpiece was the work of garden designer Pip Morrison, who then handed things over to “the gardens and estates team at charity Historic Royal Palaces.” It apparently took five gardens a total of 1,000 hours to plant the garden, a project that they embarked upon back in October 2019.

However, Morrison and the team of hardworking gardeners weren’t the only ones involved in reviving the special spot. The Daily Mail pointed out that Diana’s sons, “Princes William and Harry have worked closely with the team at Kensington Palace to re-design the garden” where their mother’s statue is now found, “filling it with glorious scented blooms loved by their adored mother.” We’re sure Diana would have loved and appreciated the special gesture from the sons she adored in return.