Meghan Markle and Kate Middleton’s relationship went through a bit of a trying time after one of the women made the other cry ahead of Meghan’s wedding. In 2018, the British press released a report that claimed Meghan made Kate cry at a dress fitting for Princess Charlotte, according to Newsweek. However, Meghan told quite a different story. In speaking with Oprah Winfrey earlier this year, Meghan said the “reverse happened,” and said that it was actually Kate that made her cry. “A few days before the wedding she was upset about flower girl dresses and it made me cry. It really hurt my feelings,” Meghan told Oprah, according to Harper’s Bazaar.

And while the two women have been spotted smiling together on various outings — at Wimbledon, for example — it has long been believed that they actually don’t care much for each other. Couple that with a rift between their husbands, and it really didn’t sound like Meghan and Kate would ever get along. It has been well over a year since the two women have seen each other, and many royal watchers have found themselves wondering what Meghan and Kate’s relationship is like today. Keep reading to find out.

Meghan Markle and Kate Middleton may be bonding over Lilibet Diana 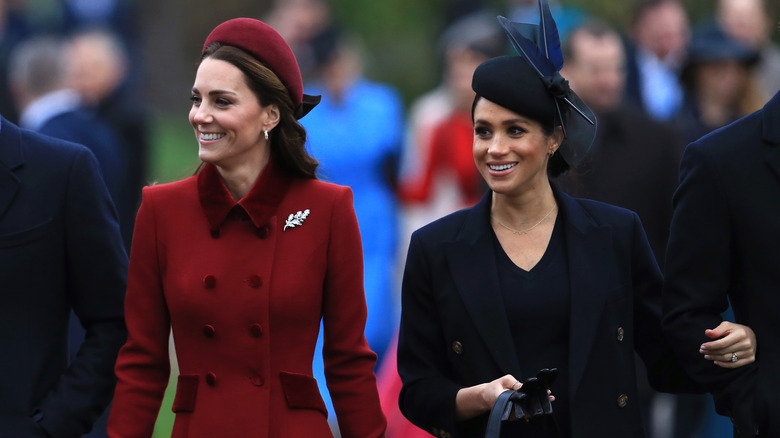 It seems as though Meghan Markle and Kate Middleton are in a much better place than they have been in the past, at least, according to Us Weekly. A source told the outlet that the sister-in-laws have been getting along swimmingly lately, bonding over Meghan and Prince Harry’s newborn daughter, Lilibet Diana. “Tensions have eased between Meghan and Kate. Kate even sent Meghan a gift for the baby. They’re in a better place and have exchanged texts since the birth of Lilibet,” a source told the outlet.

And, as far as that bridesmaid dress situation that caused a major he-said/she-said is concerned, Us Weekly’s source said the women are basically over it. “The bridesmaids dress incident took place so long ago and [it] feels pointless to hold onto the anger. It’s wasted energy. They’ve called it truce,” the source said. And it seems like this information tracks. Back in early June, the Duchess of Cambridge was asked about her newborn niece. “I wish her all the very best, I can’t wait to meet her because we haven’t yet met her yet so hopefully that will be soon,” Kate told reporters, according to Reuters. Kate may get that opportunity in just a couple of months; rumor has it Meghan and Harry will be traveling to the UK in September, according to the Daily Mail.