They say you either die a hero or live long enough to see yourself become a (reality TV) villain, but what comes next? That’s what Hannah Berner is figuring out, as she transitions back to life as a stand-up comedian and not a reality star. For the first time in three years, Hannah is not filming the show that made her famous: Bravo’s Summer House.

“I feel like it’s a weird FOMO,” Hannah remarks over video chat from a hotel room in Richmond, Virginia, where she performed multiple shows over the weekend. “It’s, like, you kind of want to be invited, but you don’t really want to go, because I’m doing my comedy, which is what makes me really, really happy. [Summer House] is not necessarily the best place for me and a guy that I really, really am in love with to be like, ‘Let’s throw him in this friend group who doesn’t always want the best for me.'”

Hannah’s life is not quite at a 180 from where she was when she first joined the cast of Summer House at 26, but it is shifted, maybe 90 degrees. Since first putting on a mic pack, Hannah’s launched multiple podcasts, hosted Bravo’s Chat Room (it’s currently uncertain if the pandemic-produced, round-table talk format will return to the network) and, probably most importantly, got engaged to fellow comedian Des Bishop. He’s out on the road with her for select dates on her “The Housebroken Tour.”

“It has been incredible to be in the flesh again — and I hate saying in the flesh — but it’s nice to not be behind a screen and just to be raw and myself and be able to make America laugh a little bit after the pandemic,” she says. “My material before the pandemic was all about why I’m single. Is it my fault? Is it f**kboys’ fault? Is it Disney’s fault? Is it society’s fault? … And I had to change a lot about my set, but it’s like you’re always evolving, you’re always changing, and you always have to keep making fun of yourself.”

Hannah says people expect her to have all those answers now that she’s booed up, but she seems to have even more questions. That only lends itself to more material, though, and nothing’s off limits in either comic’s set. As Hannah puts it, “We are no holds barred as long as it’s funny. If it’s not funny, it’s not worth it.”

“With Des, I did everything wrong,” she notes. “I put him on a reality show that went terribly. I forced him. Then I’m dealing with all the aftermath of it all, crying all the time, depressed, anxious, but he’s my… it’s so corny, but when you find someone who accepts you for you, it’s OK. So I know we’ve been through a really hard time the last couple months, but he’s seen all of me. I would call him at night being like, ‘I fought with 13 people and there’s only seven people on the cast.’ And he’s like, ‘This girl’s marriage material!'”

The pair originally intended to tie the knot this August with a small, family-only ceremony at a relative’s house, but they’re now eyeing a larger event next spring.

“We were like, you know what? Let’s date outside a pandemic for a bit so that we get to know each other,” Hannah explains. “Like, how are you at restaurants? How are you not on reality TV? And then we’re kind of going to go in for a bigger wedding now, which is exciting.”

Des quickly crashes the video chat from the other room, though, to explain the real impetus for pushing the big day was their original venue falling through.

“It is the truth,” Hannah admits. “But I think it’s funnier to say that it’s because we didn’t know each other outside of the pandemic.”

It’s obvious Hannah has found her funny again after a pretty unfunny end to her time on Summer House. The season 5 reunion capped off in May with nearly everyone on the cast — save for Paige DeSorbo and Ciara Miller — at odds with the Berning in Hell host.

Hannah’s co-stars accused her of being performative (“If I could perform a different way, I would have. I would have kept my cool if I could perform,” Hannah offers back), trash talking (“You’ve all said horrible things about me,” she responds. “I have my Google alerts. I’ve seen them all, so why don’t we all just embrace that we’re on a reality show with a lot of drama and friendships that have ups and downs, and let’s have fun?”), and believing herself to be the “star” of an ensemble show. 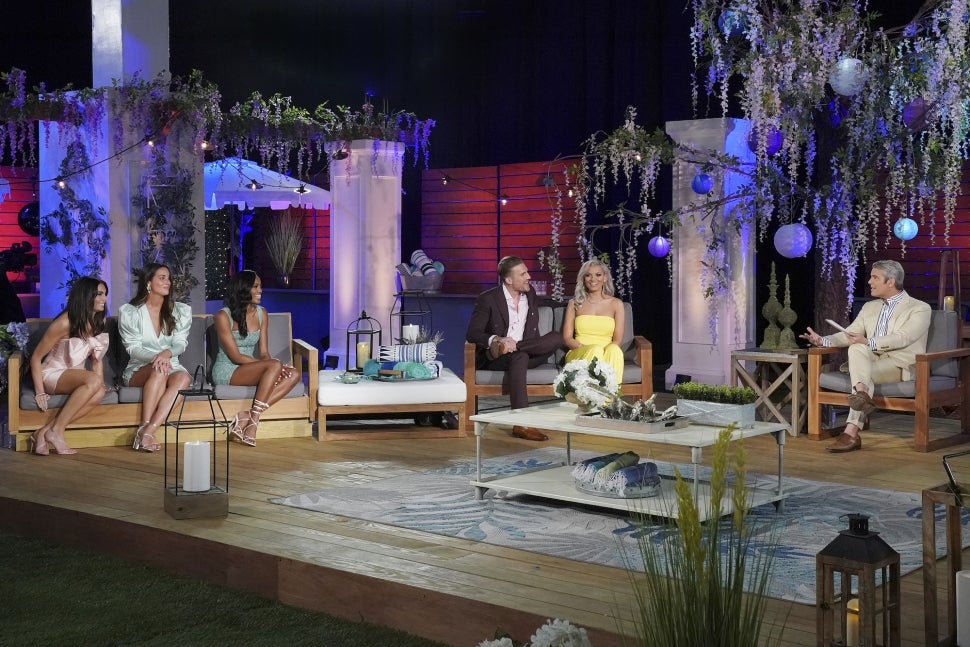 “I don’t know if the cast members were very happy about Chat Room,” she surmises. “I never really got congratulations or any of that, so I don’t think that it helped my friendships with them, which is very unfortunate because I feel like the more everyone else is doing positive things, the better it is overall for the show. We should be more of a team instead of like, ‘Oh, that person’s a black sheep now, let’s push them out.'”

Even with that all said, the 29-year-old is still processing a lot of those accusations.

“I definitely had to go into therapy after,” she confesses. “People can say stuff like, ‘Oh, you’re going to go on a reality TV show. Are you sure?’ And the first two seasons, I was like, ‘It was incredible!’ And then my last season, I was like, ‘I need therapy.’ And I’m going to be OK, and it’s time to figure out, kind of, my next journey.”

“I realize that some things, reality TV and the comedy world, aren’t always good meshed together,” she adds. “It was a scary time for me. It got to the point where I found out that cast members were becoming friends with hateful Twitter accounts and bloggers and Reddit, and it was just a really hard time knowing that people were purposely having hate campaigns against you.”

Hannah says it was stepping away from the show (she maintains it was her choice and that the “door is open” for a future return) that gave her the space to see what really brings her joy in life, and that’s her comedy… even if her former co-stars continue question if comedy is a real career (see: Kyle Cooke’s Instagram stories). Hannah says she hasn’t spoken to any of her former housemates (save for, again, Paige and Ciara) since taping the reunion special in the spring.

“I’ve made an effort, but no,” she admits. “Since I got engaged, things were really weird.”

Des proposed to Hannah in February, with the news breaking weeks later, and some Summer House stars finding out about the engagement through the press. It’s an issue Amanda Batula, once Hannah’s close ally, brought up at the reunion, questioning if she and Hannah were ever really friends. Hannah claims they were friends until the season started airing, and then “it was me versus everyone.” 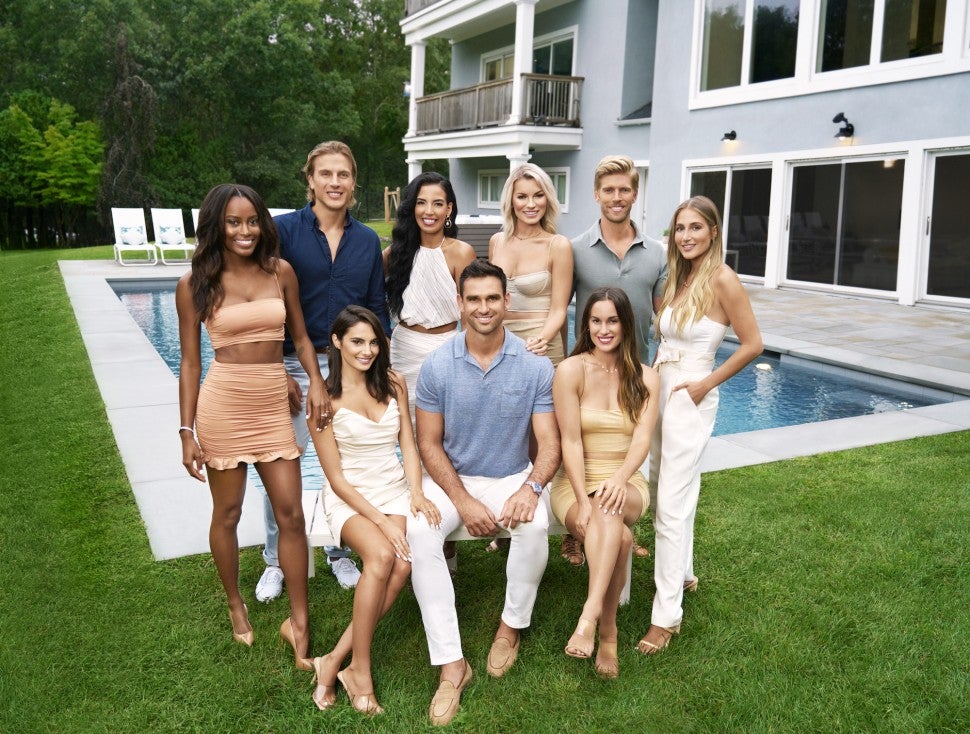 “When the season aired, it was horrible,” she recalls. “I really felt like they were my family. So it’s been a difficult kind of end to my reality TV world. … It’s crazy how the outside world’s opinions can affect people and who jumps on the bandwagon and who doesn’t.”

Ultimately though, Hannah says she has no regrets about how her final days on reality TV played out. She leaves with a friend for life in Paige. The duo’s figuring out how to build a new media empire with their podcast, Giggly Squad. There are more merch drops and potential live shows in their future.

“Giggly Squad has never really been associated with Summer House,” Hannah is quick to note. “That friendship is not for TV. That is a real friendship, and I think that that’s why people really love Giggly Squad, and I’m just really lucky to have Paige in my life too, because she’s a real one.”

A recent Instagram post by Hannah’s grandmother Vera DiLeo sent Summer House watchers into a slight tizzy, after Paige was MIA from an engagement party, while Ciara was in attendance. Some Gigglers, as listeners of the podcast are called, questioned if there was drama between the hosts. Paige was simply out of town.

“My nana, @nanastillgotit on Instagram, is out of control,” Hannah laments. “I love her to death, but she’s living our family life and she doesn’t realize there’s public eyes on it.”

“One thing I wish from Summer House is there was less of people trying to separate me and Paige, or say that Paige and I should not be friends,” Hannah says. “There was always that kind of energy, and I’m like, ‘Why can’t we just embrace this beautiful friendship of two women that are rooting for each other?’ And Giggly Squad gives us that opportunity to be ourselves. And we get into it on Giggly Squad. We make fun of each other more than anything, but we understand what’s funny and what’s a good sense of humor.”

Even as she builds out her life away from Summer House, Hannah is well aware that the shadow of the show will follow her wherever she goes. That shadow will bring repeat questions, many of which she’s answered here or elsewhere. (For the record, she has and continues to apologize for making light of comments her ex-co-star Luke Gulbranson made in the past about suicidal ideation.) Now, she hopes Summer House fans give her the space to show that she knows better and can do better.

“Summer House has given me a platform to now be able to have people kind of care a little bit about what I’m up to — which is so weird — but now I can see kind of what other talents I could bring besides being performative on reality TV,” she quips.

To see if “The Housebroken Tour” is coming to a city near you, visit HannahBerner.com.