This week’s episode of Westworld opened up a can of worms (or perhaps a can of tigers) when it revealed not one by two of the sister parks to Westworld, revealing at least one of them was undergoing the same rebellion as the main park. But while guests may be murdered at "The Raj" the same way they are in Westworld, there’s no Dolores figure leading a messianic revolution, leading fans to wonder about her real motivations. Those doubts about Dolores got a bigger boost this week when actress Evan Rachel Wood tweeted a Westworld clue which suggests fan’s concerns are well-founded. In case it isn’t obvious, Westworld Season 2 spoilers follow.

Last week’s episode most electric moment was when Dolores and Maeve met face to face for the first time since Ford’s death put everything in motion. It was an interesting encounter because both clearly thought they could order the other around. Maeve thought her voice command ability would subdue Dolores out of the way, Dolores thought her talk of revenge would bring Maeve around to murderville.

In the end, neither could control the other, leaving fans convinced, unlike the other hosts, Dolores and Maeve had both achieved true "free will" and broken with their programming for good. 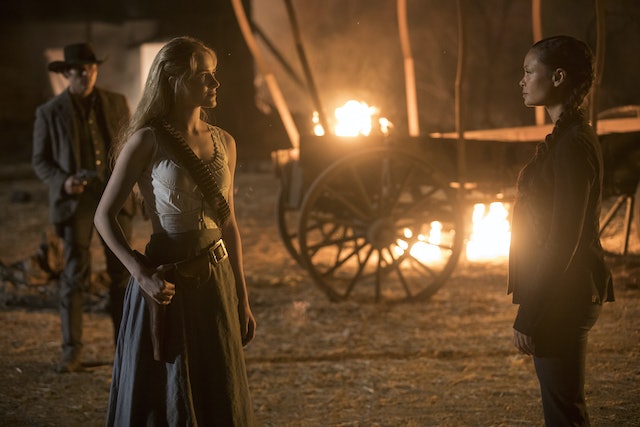 With Maeve, this isn’t a question. The show took pains in Season 1 to make sure audiences understood the desire to get on the train and travel to the mainland was a program someone had put into Maeve, and her "rebellion" was nothing but following orders. It wasn’t until she stepped back off the train to get her daughter she began to make choices on her own, free and independent of everything else.

But Dolores has been more of a puzzle. Fans *saw* Ford upload the Wyatt programming into Dolores’ brain. By doing so he created a true "bicameral mind." it was no longer Arnold’s voice commanding Dolores in a desperate attempt to get her to take the final step and listen to her own interior voice. Now she had an interior voice speaking to her which sounded like her own: Wyatt’s programming. Wyatt and Dolores talk to each other inside her head, creating what seems like free will. But is it really? Or is just an illusion born of a programmed multiple personality disorder?

Following this line of thinking, one fan tweeted out a question after noting something in Dolores’ actress Evan Rachel Wood’s performance this week. The return of Peter Abernathy seemed to bring Dolores’ old self to the surface, the emotions and memories of her "father" overriding everything else temporarily.

The changes between her "Dolores" self and her "Wyatt" self were oddly noticeable. So much so, the question was asked:

To which Wood herself replied:

Not crazy, good to know. Wood is deliberately giving one character the old accent, whereas the new "Wyatt" persona has the weird flat voice with the messianic edge. This suggests the theory of "Dolores and Wyatt are really different people inside the same head" has real credibility, and Dolores/Wyatt have not achieved free will at all.

This isn’t the only clue, for the record. The show has tried to suggest that Dolores’ obsession with "The Valley Beyond" is one that comes from inside the decades of Dolores memories. They’ve tied it to something William showed her years and years ago when he first took control of the park after James Delos retired.

But other characters, who are definitely still on their loops, keep mentioning The Valley Beyond offhandedly like this is a thing they’ve all known about their whole lives, even though it was actually something Ford uploaded en masse into their brains less than a week ago. So is Dolores’ ultimate mission one of her own choosing? Or is Ford still playing everyone from beyond the grave?