Eurovision 2023: How to get tickets, when was it last held in the UK, who won the 2022 contest? – ahead of an update on the host city shortlist

The Eurovision Song Contest will be staged in Britain in 2023, after organisers concluded it would not be possible to host it in Ukraine – due to the ongoing war with Russia.

And there will be an update about the shortlist of UK cities that could host next year’s Eurovision Song Contest from the BBC on Tuesday.

The UK – who came second to the Ukraine in this year’s competition – said the 2023 event would be a celebration of Ukrainian culture and creativity.

Ukraine won the right to host the glitzy pan-continental music competition when its entry, from the folk-rap ensemble Kalush Orchestra, won this year’s contest in May as Britain’s Sam Ryder was second. 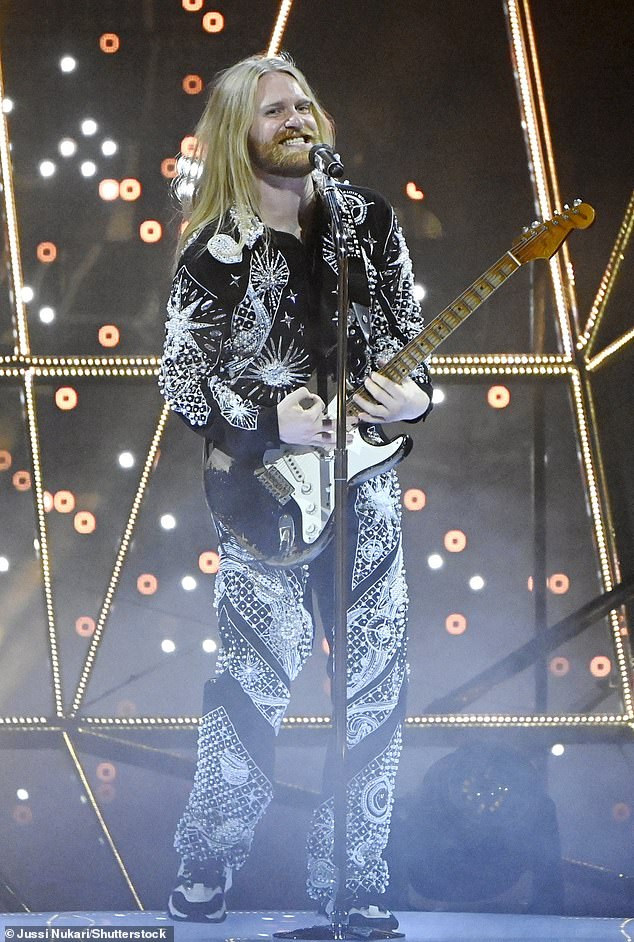 Yay! The Eurovision Song Contest will be staged in Britain in 2023, after organisers concluded it would not be possible to host it in Ukraine – due to the ongoing war with Russia (Britain’s runner-up contestant Sam Ryder pictured earlier this year)

However the European Broadcasting Union (EBU) – which runs Eurovision – said it had concluded that ‘regrettably, next year’s event could not be held in Ukraine for safety and security reasons’.

In place, it announced, the BBC had agreed to host the show on behalf of Ukrainian broadcaster UA:PBC.

Ukraine will automatically qualify for the grand final alongside the so-called big five nations – the UK, France, Germany, Italy and Spain, who each get a free pass because of their financial contributions to the event.

Ahead of the announcement about the host city shortlist here is everything you need to know about Eurovision 2023: 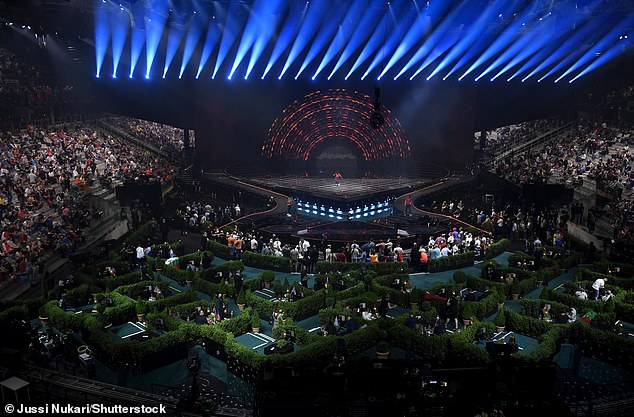 Hosts: The UK said the 2023 event would be a celebration of Ukrainian culture and creativity. Pictured, the Eurovision stage in Turin 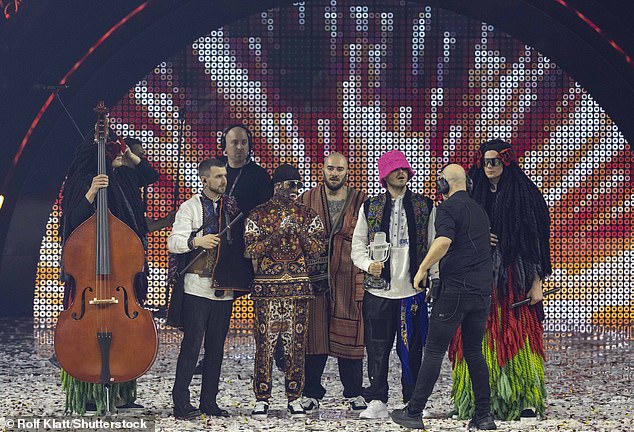 Winners: Ukraine won the right to host the glitzy pan-continental music competition when its entry, from the folk-rap ensemble Kalush Orchestra, won this year’s contest in May

How to get Eurovision tickets?

Details about when and how tickets will be available have not yet been announced however the start of sales is likely to be late 2022.

According to Eurovision World, tickets ‘usually go out early the same year or late the year before the contest’ depending on a number of factors, including the venue, ticket agency and details of show production.

According to the outlet, in past tickets have been sold in batches and have been available for nine shows – six of which are rehearsals, and three of which are live shows.

For this year’s competition, tickets became available on April 7, with the Grand Final taking part in May. 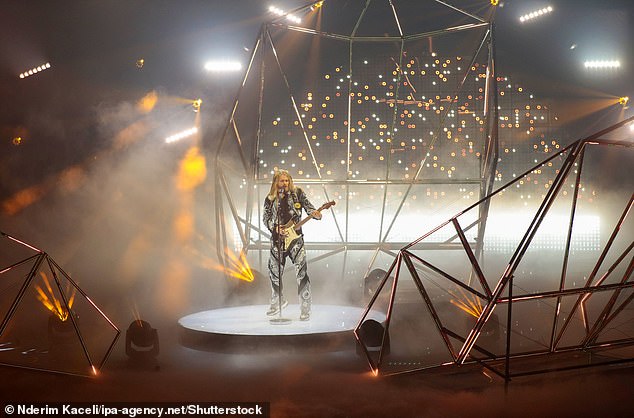 Second place: The BBC had agreed to broadcast the show on behalf of Ukrainian broadcaster UA:PBC. Britain’s Sam Ryder pictured earlier this year

How much will tickets cost?

Eurovision World suggests that, while historically the most expensive Eurovision tickets have been for the Grand Final live show, prices have varied over the years.

Where will the Eurovision contest be hosted?

According to the EBU’s announcement, a ‘bidding process’ to decide the host city will be launched this week.

London, Manchester and Sheffield all said that they would apply.

Sheffield City Council was among the first to announce a bid, saying on Twitter: ‘We’ve told Eurovision we’d love to host…watch this space.’

Manchester City Council confirmed it was also putting in a bid, with its leader Bev Craig tweeting: ‘A world class music city, brilliant venues, experience in hosting major events, and of course one of the UK’s largest Ukrainian populations – we are confident we will make it a #eurovision to remember.’ 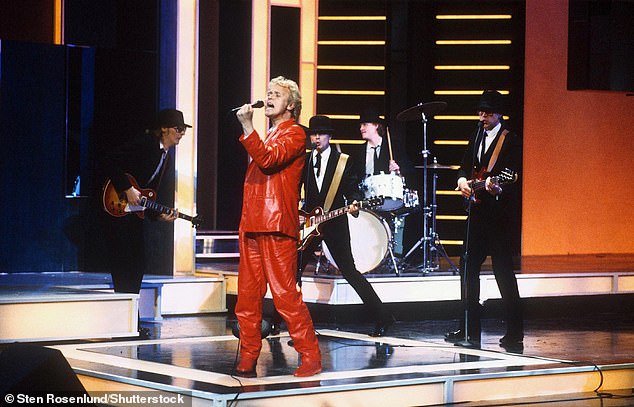 Venue: According to the EBU’s announcement, a ‘bidding process’ to decide the host city will be launched this week. Pictured: The Eurovision Song Contest at Harrogate Conference Centre in 1982

Announcing London’s bid, mayor Sadiq Khan said the city was ‘ready and willing to step in’ with a contest that ‘celebrates the people of Ukraine and shows off the very best of Britain’.

Glasgow also previously expressed an interest in hosting the contest with the city’s OVO Hydro arena saying it would be ‘delighted’ to be involved in discussions.

In June, Scotland’s First Minister Nicola Sturgeon also backed the city to host, tweeting: ‘I can think of a perfect venue on banks of the River Clyde!!’ 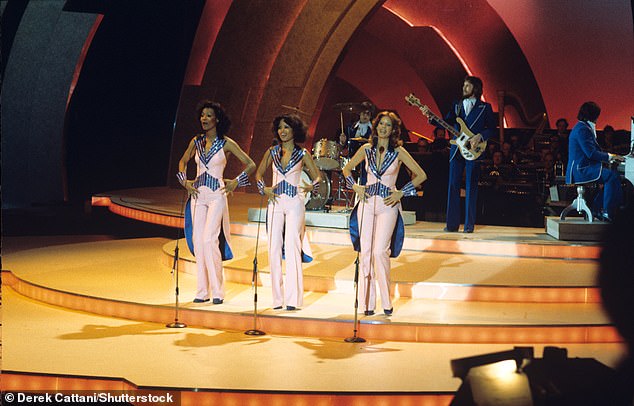 Bids: London, Manchester and Sheffield all said Monday that they would apply. Pictured: The Eurovision Song Contest at Wembley Conference Centre in 1977

It will be the ninth time Eurovision has taken place in the UK – more than any other country.

Tim Davie, Director-General of the BBC said: ‘It is a matter of great regret that our colleagues and friends in Ukraine are not able to host the 2023 Eurovision Song Contest. 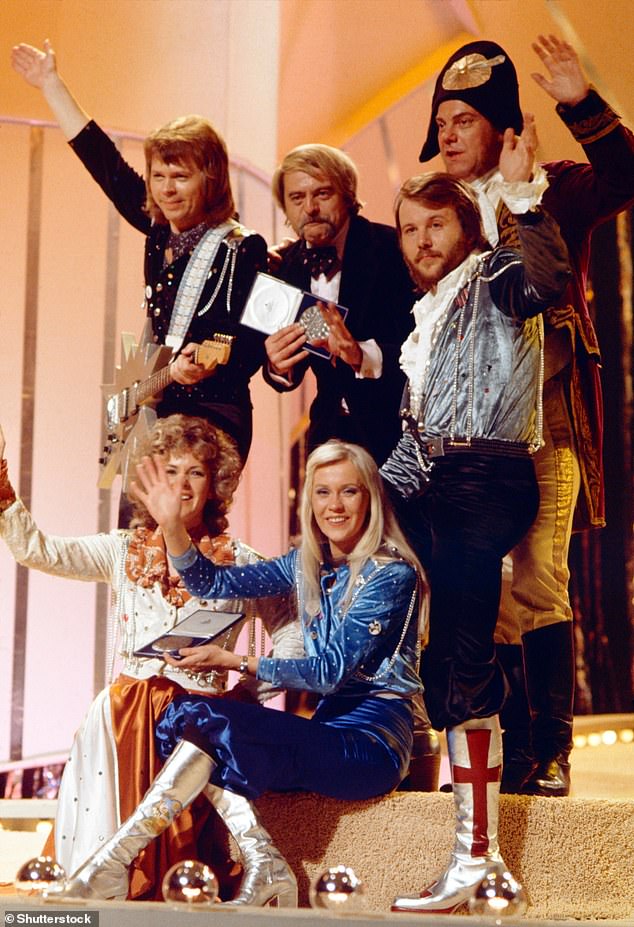 Legacy: It will be the ninth time Eurovision has taken place in the UK – more than any other country. Pictured: ABBA at the Eurovision Song Contest in Brighton, 1974

‘Being asked to host the largest and most complex music competition in the world is a great privilege.

‘The BBC is committed to making the event a true reflection of Ukrainian culture alongside showcasing the diversity of British music and creativity.

‘The BBC will now begin the process to find a Host City to partner with us on delivering one of the most exciting events to come to the UK in 2023.’

A press release from the broadcaster added: ‘The dates for the 2023 Eurovision Song Contest will be announced in due course.’

The contest will consist of two semi-finals and a final in May 2023.

Founded in 1956 to help unite a continent scarred by World War II, Eurovision has grown to include more than 40 countries, including non-European nations such as Israel and Australia.

Organizers strive to keep pop and politics apart – banning overtly political symbols and lyrics – but global tensions have often imposed themselves on the contest.

Russia was kicked out of this year’s competition because of its invasion of Ukraine in February.

Who won the last Eurovision?

This year’s competition was won by Ukraine’s folk-rap group Kalush Orchestra with their song Stefania.

The country joined the contest in 2003 and its three wins make it one of the most successful of the newer competitor countries – having triumphed in 2004 and 2016.

During their performance, which combined rap and Ukrainian folklore, the group were dressed in elaborate outfits, including long multi-coloured fringed ensembles.

Ukrainian president Volodymyr Zelensky said in a Facebook post: ‘Our courage impresses the world our music conquers Europe! Next year Ukraine will host Eurovision! For the third time in its history. And I believe – not for the last time.’

How many times have the UK won Eurovision?

The most memorable win was Bucks Fizz, who wowed audiences with their hit, Making Your Mind Up, which featured a skirt-ripping dance routine, complete with big hair and 80’s attire.

The UK last won Eurovision in 1997 with Katrina and the Waves.

When Eurovision last held in the UK?

The UK last hosted Eurovision in May 1998.

Birmingham was selected as the host city with the event being held at the National Indoor Arena. 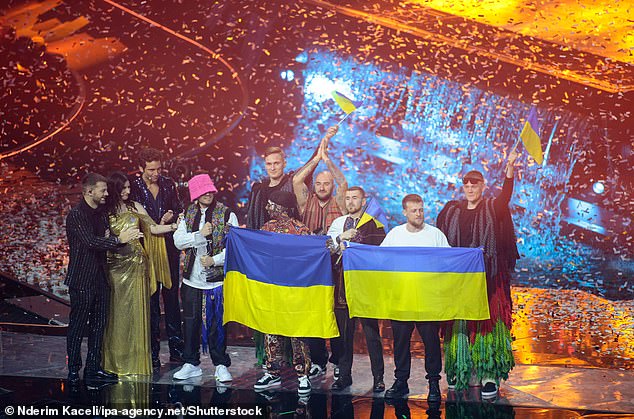 Friends: Tim Davie, Director-General of the BBC said: ‘It is a matter of great regret that our colleagues and friends in Ukraine are not able to host the 2023 Eurovision Song Contest’