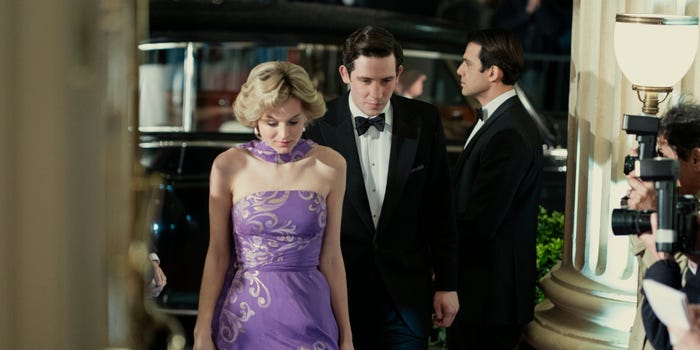 Cast members of "The Crown" are speaking up in defense of Netflix's stance to not add a disclaimer before every episode of the drama series that labels it as a work of fiction.

Most recently, Emma Corrin, who portrays Princess Diana in season four of "The Crown," told Variety that she understands where criticism toward the series is coming from — but that she sees it as a clear historical drama.

"It is very clearly a dramatized version of events. This is fictitious in the same way people don't mistake 'Succession' for what actually happened with the Murdochs," Corrin said.

She added: "I also understand [the request] comes from a place of sensitivity and protectiveness of the royal family and Diana."

In late November, Oliver Dowden, the UK secretary of state for Digital, Culture, Media and Sport, told the Daily Mail that he planned to write to Netflix and request that the streamer add a disclaimer to "The Crown" meant for audience members who didn't live through the events depicted in the show.

Princess Diana's brother, Charles Spencer, has also echoed criticism about the latest season of "The Crown," which portrays the marriage of Lady Diana Spencer and Prince Charles and their relationship throughout the 1980s. Spencer said in November on an ITV talk show that he fears viewers of the TV show will "forget that it is fiction."

In response to claims that the show isn't clearly marked as a historical drama, Netflix representatives shared a statement obtained by Deadline that affirms its stance that its viewers know the narrative is fictionalized.

"We have always presented 'The Crown' as a drama – and we have every confidence our members understand it's a work of fiction that's broadly based on historical events," Netflix said in a statement. "As a result we have no plans – and see no need – to add a disclaimer."

In addition to Corrin, Josh O'Connor, who portrays Prince Charles in "The Crown," has also defended Netflix's statement that the historical drama series is already clearly marked as a fictional show.

O'Connor told the Mail Online that he finds Dowden's claims that the show needs a "health warning" to be "outrageous."

"We were slightly let down by our culture secretary, whose job it is to encourage culture," O'Connor said during an appearance on the LA Times' "The Envelope" podcast, according to the Mail Online.

O'Connor continued: "In my opinion, it's pretty outrageous that he came out and said what he said. Particularly in this time when he knows that the arts are struggling and they're on their knees, I think it's a bit of a low blow."

The actor added that he believes "The Crown" viewers are aware that the show is dramatized.

"My personal view is that audiences understand," O'Connor said. "You have to show them the respect and understand that they're intelligent enough to see it for what it is, which is pure fiction."

Helena Bonham Carter, who has played Princess Margaret in the past two seasons of the show, said on the official podcast for "The Crown" that she thinks the cast has a duty to remind viewers that the show is dramatized.

"I do feel very strongly, because I think we have a moral responsibility to say, 'Hang on guys, this is not … it's not a drama-doc, we're making a drama.' So they are two different entities," Bonham Carter said.