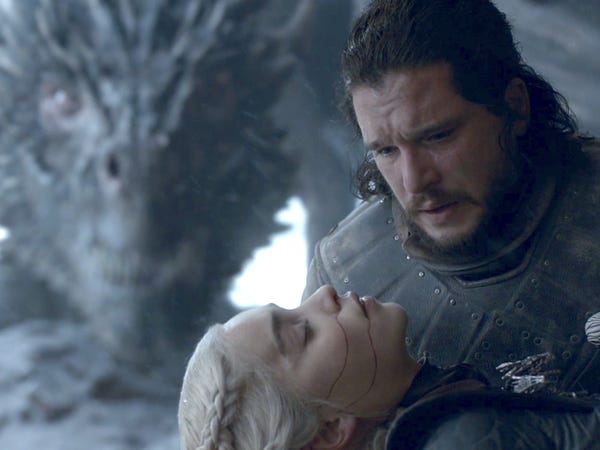 The murder of Daenerys Targaryen in the "Game of Thrones" finale was the final tragic twist in the last hours of the HBO hit series.

After Jon Snow stabbed her in the throne room of the Red Keep, Daenerys' last living dragon melted down the Iron Throne and then carried her body away as he flew towards the open ocean.

In a new book by Entertainment Weekly's James Hibberd, "Fire Cannot Kill a Dragon," Emilia Clarke finally offers up her take on where Drogon headed.

"People have asked me about that a lot," Clarke began. "It's my tendency to be funny with it and say, 'Oh, Hawaii.' But honestly, if I'm really being very serious about the whole thing: I think he flies around with her body until it decomposes. I literally think he keeps flying until he can't fly anymore. He just keeps grieving."

Drogon's fate was left as an open-ended question in the show. He was the last living dragon, which means his eventual death would once again leave the world of "Game of Thrones" without a trace of magical creatures (especially with the White Walkers destroyed and the Children of the Forest extinct).

Later on in the finale episode, King Bran asks his small council whether there's been any word of the last dragon. Sam starts to say that Drogon was "last spotted flying east, towards —" when Bronn cuts him off.

But it sounds to us as if Sam starts to say "Volantis," the city in Essos where the high priestess of R'hllor resides. That little detail caused some fans to speculate about Dany getting resurrected by the Lord of Light.

Without a clear answer provided in the show, which went off the air in May 2019, fans are welcome to come up with their own theories just as Clarke did.