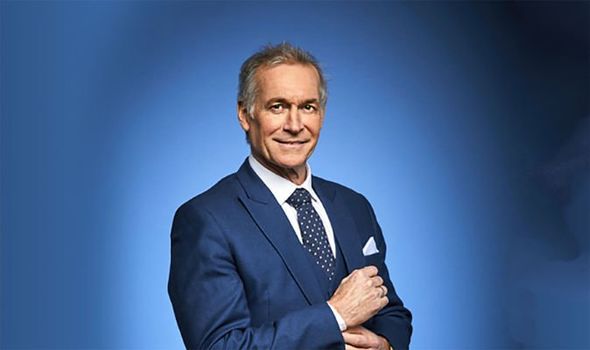 The terrible wound was one of three injuries he sustained while serving his country in the Westminster Rifles on the bloody Western Front. Now his story has inspired Dr Hilary’s new novel, Frontline, a moving love story featuring an aristocratic nurse, Grace, and Will, the soldier son of a docker.

Dr Hilary, who has been a resident medical expert on morning TV for the last 32 years, takes up the story: “I’ve always wondered what it must have been like to be there, going over the top at the Somme.

“When he recovered from his injuries, my grandfather was returned to the front. Can you imagine having those kinds of injuries and then going back?”

The courage of that generation, he believes, remains inspirational to this day. And he says his grandfather was in the forefront of his mind when he began to ponder the striking parallels between the FirstWorld War and the current Covid-19 pandemic, the greatest public health crisis in a century.

Dr Hilary, a constant, calming presence on television during the pandemic, believes a line can be drawn between the magnificent sacrifice and dedication of the people then and those now working on the frontline – hence the book’s title.

“When I had the idea, my grandfather was very much in my thoughts. And, of course, like the main character in the book, he was called Will.”

Frontline does not flinch from recounting the unspeakable horror of the trenches, which Hilary describes as “a vision of hell”. Like so many of his generation, after the war Will carried those horrendous images with him, but rarely mentioned the ordeal.

The doctor, who has the same soothing bedside manner one-to-one as he does on TV, says: “It was so awful, my grandfather would never talk about it to his family. He kept it very much inside him. To have witnessed that carnage must have been dreadful.”

Dr Hilary sought permission from his former nurse mother Noreen, whom he cares for, to use her father’s name in his book. But when it came to fleshing out the character of Will in Frontline – which is the first in a series about a prominent medical family – Hilary drew on someone closer to home.

“That character is based on my eldest son, Tristan, who is also a GP and in my eyes a saint,” he explains. “He’s got a lovely temperament. He is a wonderful character, and is such a hero to me.”

Tristan will be delighted to hear that, I venture. “He doesn’t even know about it yet. You’ve got an exclusive!”

The other remarkable aspect of Frontline is the number of echoes it finds between the past and the present. The 68-year-old doctor, who has appeared on Good Morning Britain every day during the pandemic, says: “I was writing about something that happened 100 years ago, but had uncanny similarities with what’s happening now.

“People working on the frontline during the pandemic compared it to a war zone. As I sat there in my studio over the last 18 months, I was hearing about how some people were willing to sacrifice so much, while others were very tribal, very angry and very much in denial.”

Sadly this latter aspect of the pandemic has seen Dr Hilary – sometimes described as the nation’s favourite GP – receiving online abuse, some of which took the form of death threats, forcing him to involve the police.

The trolling began after he was made an MBE in the Queen’s Birthday Honours last year.

While he stresses it was a small number of cases, he admits to being “wary” about his social media profile. He explains: “If someone is taking the trouble to send messages, clearly that’s somebody who is quite disturbed. But I haven’t lost any sleep.”

Another correlation is between the shellshock suffered by soldiers in the First World War and the PTSD which many medical workers are now facing.

According to Hilary, who is married to Dee and has five children: “There’s no doubt that we’re seeing a massive increase in referrals for mental ill-health now, not just in frontline workers, but in the general population.

“People have been fearful of the virus, but also they’ve been worried about their family, their jobs and their finances.

“There are a lot of anxious people who haven’t had recourse to general practice dur- ing the entirety of the pandemic. I think mental health is a massive problem today because people don’t have the coping skills and resilience they perhaps had in the past.”

Sadly, that may only get worse as, “potentially long Covid will have an impact, and we still have five million people on the waiting list for things like heart disease and cancer”, he adds.

Frontline features many characters based on people Dr Hilary – whose previous novel was the 2009 offering, A Day In Your Life – has met during his 45-year career as a GP.

He says: “Doctors are all very different in their makeup. Some are very sentimental, while others are quite cold and callous. Some doctors will take pride in cutting off a limb faster than anybody else.

“Others will take more credit for doing a better job and then making life more comfortable for their patients. I once worked for a doctor who, when he was disciplining you, would whisper instead of shouting. That was much more intimidating. I hope he recognises who he is in the book!”

Away from the book, Hilary has been helping friend and fellow Good Morning Britain presenter, Kate Garraway.

Her husband Derek, who contracted the disease in March last year, is thought to be the longest surviving severe Covid-19 patient in the country.

Dr Hilary recalls: “She phoned one night when she was particularly worried, and I had a conversation with Derek. It was as a result of that conversation that I said to him, ‘You need to call an ambulance now’.

“He was clearly extremely ill. Of course, I’ve been in contact with Kate on a regular basis and helped as much as I could. Derek’s recovery has been very slow, but he’s home, and she has plenty of support.

“She has been amazing. I really respect her for everything she’s doing.

What does Hilary hope readers will take away from Frontline?

“I hope it makes people ask, ‘Why is war necessary?’ Just as we are questioning the situation in Afghanistan now, we might question whether the sacrifice of the First World War worthwhile.

It was a war of attrition where no ground was gained and thousands of people lost their lives in a single hour. “And what did we learn from it? Just 20 years later, there was another world war.”

He continues: “If we can use our imagination to understand what war is really like, then perhaps we can understand why it should be avoided at all costs.”

Dr Hilary adds that we can also take hope from the enormous medical progress we have made over the last hundred years.

“We are far, far better off now than we were then. We can understand diseases better now, we can isolate people, and we have better living conditions and nutrition.

“We have an NHS and vaccinations. We really should be thankful for the advances we’ve made in science during the last century.”

He carries on with an uplifting message. “I hope readers will see that we have been through worse.

Through adversity can come hope and peace and joy. Catastrophes like this pandemic show us that we can work together and that we should be very grateful for the people who work on the frontline.

“We should also try to be kind to other people. We should stop being so tribal. I think if we do that, the future is still bright.”

One final thought. Through its portrayal of the self-sacrifice of those who serve, Frontline stands as a potent tribute to the heroism of NHS workers.

Dr Hilary concludes that he takes great pride in having done his bit for the NHS for nearly half a century.

“The NHS has been my life, really. It has informed who I am and what I do. I’m very glad I have been able to contribute to the NHS, which has been the greatest institution this country has ever had.

“I’m also immensely proud to have been in a team whose outlook is to help people and not judge. It’s been a wonderful career, and I hope this book is the icing on the cake.

It certainly should be.

My diagnosis is that Frontline is a story to set the heart racing.