Looks like Brad Pitt and Angelina Jolie are heading to court to figure out their custody agreement. Sources tell Entertainment Tonight that while Brad hoped not to get courts involved, he wants 50/50 custody and was “left with no other choice.”

“Brad is asking for 50/50 custody to be put in place and stay in place,” a source says of the hearing (which is scheduled for today, October 5). “Angelina wants to be fair when it comes to custody. She is very structured with the children. Brad has high hopes [they can] try to make it work because of the importance of co-parenting.”

The source adds that “Brad, for the most part, has been respectful of Angelina’s parenting. While he doesn’t agree with everything, he knows she loves the kids and wants the best for them. He also knows his love and presence are needed.” 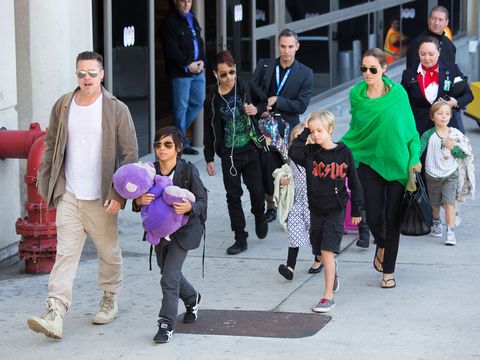 Apparently, the former couple originally came to a custody agreement in November 2018, but it didn’t work out—and while Brad has “done everything he can to avoid a court situation” he feels he has been “left with no other choice.”

An additional source tells ET that “no one wants this case over more than Angelina,” so here’s to hoping everything is resolved amicably!