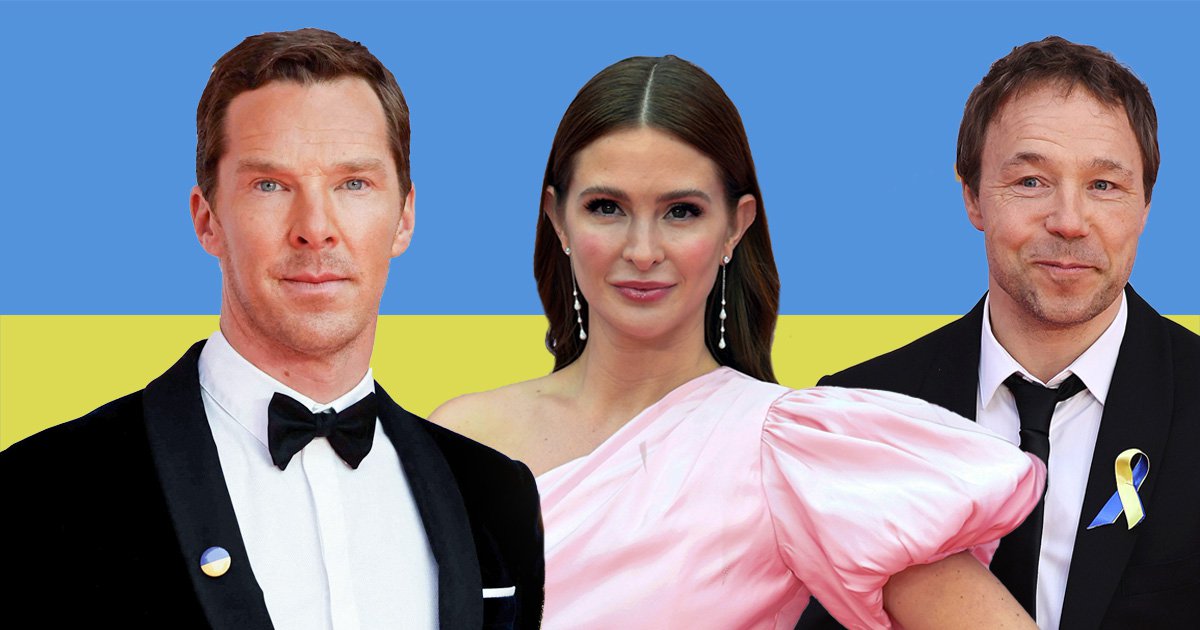 Benedict Cumberbatch and Stephen Graham led the stars supporting Ukraine on the Bafta 2022 red carpet, amid the continued Russian strikes.

So far, a total of 2.5million have fled Ukraine since President Vladimir Putin’s invasion began on February 24, in Europe’s largest exodus since WWII.

Many showed their support for the victims as they attended the annual ceremony in London today, held at the Royal Albert Hall.

Benedict proudly donned a pin bearing the Ukrainian flag on the lapel of his tuxedo as he posed for pictures before entering the party, beside wife Sophie Hunter.

Line of Duty actor Stephen Graham also followed suit, with a blue and yellow ribbon prominent on his black blazer.

EastEnders star Jessica Plummer sported a similar ribbon pinned on the chest of her floor-length black dress, with Made in Chelsea’s Millie Mackintosh carried a ribbon on the waist of her pink gown.

Venom director Andy Serkis spoke of the escalating situation in Ukraine while on the red carpet, and said that ‘arts do hold humanity together.’

Reflecting on the Russian invasion of Ukraine, the 57-year-old told PA: ‘It’s a difficult situation having a celebration like this when such horrendous, horrific things are happening not too far away from here.

‘But I think it’s also important that arts are celebrated because arts do hold humanity together, and actually freedom of speech and the power of storytelling is something that I think Ukrainians would totally applaud.

‘So if we hold them up tonight and reflect the enjoyment and the passion back to them, I don’t think it’s a bad thing.

‘It’s really important to remember what is going on in the context of having an event like this, but as I say, what it stands for is so positive, because it’s about inclusion, because actually Bafta have really, really moved, in the last few years, towards inclusion.’

While Bafta chairman Krishnendu Majumdar addressed the conflict while on stage at the ceremony.

‘We are hugely grateful to the journalists and filmmakers covering Ukraine, may of whom are Bafta members, who are bravely reporting and documenting the conflict and humanitarian crisis,’ he told the audience.

‘Our thoughts are with the people of Ukraine, as well as those affected by the many other conflicts around the world at this time.’